It does genuinely seem to me that things changed in 2011, in ways that have major consequences for radical politics. Marko Hoare’s “The year the worms turned” and Kenan Malik’s more downbeat “Chewing over the old year, spitting out the new” summarise this shift well. I am allowing myself a small measure of hopefulness that some of the morbid fixations that have afflicted the left in recent years might loosen their grip a little in light of these changes, and that a healthier radical politics might emerge. 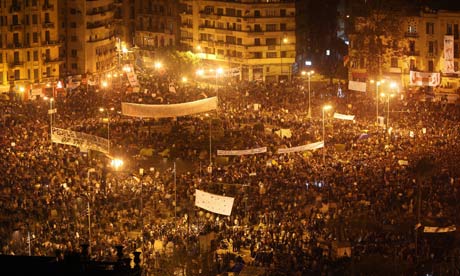 For a decade, much of the left has been fixated on the Middle East in terms of the wretched of the earth in the position of victims of an all-powerful all-evil “imperialist” West. Any futile and destructive act of terrorism has been excuses as “resistance” to imperialism, and any bullying thug or theocratic clique that “stands up” to imperialism has been given support.  Now, we are forced to confront the fact (long obvious to the less myopic) that the anti-imperialism of tyrants has simply been an alibi for power, that the people on the Arab street desire freedom and self-government more than they hate “imperialism”, and that boring bourgeois liberal rights like free assembly are actually worth fighting and even dying for.

At the same time, here in the global northwest, with the financial crisis, the impoverishment and precariousness of masses of “formerly middle class” people (as the New York Times put it), the squashing of aspirations and squeezing of social mobility, and the naked aggression of “centre-right” governments to any kind of social safety net, the debate has been reframed away from anti-war protests and identity politics towards the bread and butter of life under capitalism. 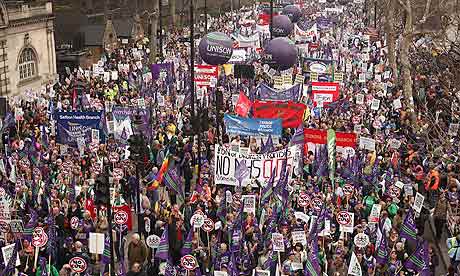 It is a real measure of the sickness of the left, however, just how little forward movement it has made in the last couple of years, when even the financial press talks about capitalism being in crisis and suggests Marx might have been right. In a post on Margaret Thatcher’s death, James Bloodworth suggests that “the left should instead examine with clear-sightedness where it has gone wrong, how it has behaved and how it can do better – and boy, can it do better. Considering the complete failure to make any political inroads since the 2008 banking crash, this should be clearer today than ever.” (The title puts it pithily: “Instead of celebrating when Thatcher dies, the left should reflect on what a pig's ear it’s made of the past 30 years”.)


Similarly, Chaminda Jayanetti, in a post entitled "How the last year shaped up for left-wing activism", argues (correctly) that:


There have been massive shortcomings in how the Left has handled the public funding cuts in 2011, especially in two of the worst-affected areas – benefits and adult care. Much of this revolves around the fact that, from the militants to the wets, the leadership of the Left is not drawn from the ranks of those it claims to represent, and is therefore not much cop at representing them.

And proceeds to name some of the ways, such as:


Class: Across the Left, many people – especially in leadership positions – are middle class. They are not directly affected by most of the cuts – certainly not threatened by them – and have little direct experience of what it is like to live on a paltry income. The centre Left did little to encourage participation or leadership by people from outside its middle class demographic, while the hard Left was fearful of non-believers who might not share its doctrines. In both cases, the people who should have been at the heart of the movement found themselves marginalised by it. [...]

Networks: Middle class people have stronger networks than those on the wrong end of our economic system. Take cuts such as the forestry sell-off and library closures. These do not only affect middle class people, but there is a more middle class constituency here than with, say, housing benefit. So those middle class networks (including the liberal media) kick into gear and secure high profile for these causes. I certainly don’t support cuts to libraries or the privatisation of forests. But those networks are not made available to those who are bearing the brunt of the cuts – those who receive benefits payments, and those who rely on adult care and support services. So those concerns get heard less within the middle class leadership of the Left – until the backlash arrives, as 38 Degrees has now discovered.

The ‘squeezed middle’ strategy: We saw a bandwagon develop whenever government policy impacted on some imagined notion of a suburban south-eastern middle class earning well above average income. Meanwhile cuts affecting women only rose up the Left’s agenda when polls showed female support for the government falling – opportunism masquerading as strategy. Causes were left to compete for the Left’s attention based on how they might appeal to the centre ground.

Activist bubbles: The student movement waned in 2011 largely because the fees bill was voted through – this is entirely natural. But I would question whether, by becoming so heavily based around the university occupations, those at the heart of the movement unconsciously lost sight of the need to keep bringing students from outside the movement into the movement, instead of focusing on the activist centre. I observed a London Student Assembly meeting in December 2010 and it was not a pretty sight – turgid, sectarian, with many students leaving early. It bode ill for the year that followed.

These are some of the weaknesses to be addressed if the left is to do better. As James hints, central to the doing better is re-connecting to ordinary people. Of course, ordinary people are in some senses mythical – are we not all ordinary in some ways and extraordinary in others? – and a pandering to some lowest common denominator metropolitan stereotype of the common man is as reactionary and patronising as the academo-ultra-left’s “romance of the multitude”.

But it is an evident truth that the vast majority of people, despite feeling the squeeze of neo-liberal capitalism, are completely alienated from the language, style and vision of what passes for the left today.

Hence James suggests some “demands” – higher taxes for the rich, transparency about their incomes, recall of MPs, addressing the buy-to-let market crisis – that lefties should be making (in the UK), partly to show how it is addressing the squeeze people are feeling. I am sympathetic to all of these, and I think we should be demanding more of the rich, not politely asking for it.

But I don’t feel this is a completely helpful way forward. It is a valid criticism (made by TNC for example) of the Occupy movement that it has no demands, no programme – but one problem with a such a programme of demands is that it remains within the logic of parliamentary capitalism, for want of a better phrase; it suggests a way of managing ourselves out of the crisis, a nicer capitalism. In the absence of a revolutionary movement, perhaps this is the best we can hope for, but it seems inadequate.

On the other hand, the language of a series of demands like this reminds me of the Militant Tendency in the age of the dreadful Ted Grant: the reduction of Trotsky’s transitional programme to a turgid formula beginning, if I recall correctly, with the nationalisation of the “commanding heights of the economy”. That kind of politics was stale in the 1980s, and even staler now, and puts ordinary people off a lot more than it attracts them.

I liked, therefore, Chris Dillow’s response, “Should lefties really be making ‘demands’?” He suggests that making demands is a counter-productive way of framing the argument, and suggests three interesting ways of re-framing: an assertion of rights, stressing the benefit of policies, and using the language of inevitability (“things have to change”).

A further advantage of these sorts of approaches, perhaps, is that they keep open the possibility – closed down when a programme of demands is drawn up – a politics of coalition between different sorts of radicals: those who see themselves as “revolutionary” and those who want reform, anarchist occupiers and old-style trade unionists, those who don’t even see themselves as left-wing at all. If radical politics only appeals to those who are already signed up to the club, then it has no hope.
Email Post
Labels: Reconfiguring the left

James Bloodworth said…
Thanks for linking to my pieces, Bob.

I think the point Chris made (and you make now) re demands is a valid one. I do think, though, that it depends on what issue one is talking about. I do think demands are fine with regard to the banks or the trains or the rich paying higher taxes. I think people are understandably angry about these things and a "demand" would tap into this mood - if it was advanced by the Labour Party.

When it comes to trade unions etc I understand that "demands" are probably unhelpful, because we aren't winning that argument yet.

I think, in fact, that I may write another of these left "demands" things soon, but of a more tactical bent - one basic thing the left should start saying is "got a job; join a union", or something of that sort.

Dave Osler is asking similar questions, but no productive answers have been forth coming from the assorted range of Trots, ex-Trots, etc there, just yet!

Brian Goldfarb said…
"...boring bourgeois liberal rights like free assembly are actually worth fighting and even dying for." Not forgetting such small boredoms like freedom of speech and academic freedom. I think that the Harry's Place epigraph is oh so appropriate here: "Liberty, if it means anything, is the right to tell people what they don't want to hear."