Who Is Milo Samuels?

As an anonymous blogger, I recognise that there are lots of good reasons why someone might want to be anonymous online or to have multiple identities. From Luther Blissett to the Zapatistas to the Black Block, activists not using their given identities in their activism is nothing odd, and I don't usually have time for "gotcha" style unmaskings. But these tweets caught my eye:


No reply yet from @uaf as to whether the "Milo Samuels" who writes for them is in fact the rapist Martin Smith. Perhaps their funders know?
— Kris (@k_w_a_k) February 24, 2015


@Jacqueimo If any information comes out that Martin Smith is still involved in UAF then obviously I would boycott the organisation.
— Owen Jones (@OwenJones84) March 2, 2015


Most of you will know why this is significant, but just in case here goes. Unite Against Fascism (UAF) is a front organisation for the Socialist Workers Party (SWP), and is mostly funded by trade union affiliations. I've covered it here and elsewhere.


One of its most prominent figures was Martin Smith, who was also national secretary of the SWP. (Others include vice-chair Azad Ali, also spokesperson of the far right Islamic Forum of Europe, and Weyman Bennett.) Smith was at the heart of the "Comrade Delta" controversy in the SWP, in which serious allegations of rape were covered up by the party, causing most of its members to leave. (For details on that see, e.g., Dave Renton, Andrew Coates, Tony Greenstein, Pham Bin or more from Jim Jepps.)

During his time at the forefront of the SWP's alleged fight against fascism, he kept up a good friendship with fellow jazz musician Gilad Atzmon, who he helped get a political platform to spout his increasingly antisemitic views, as I've documented here. Former party member Dave Renton summarises:

In his capacity as head of LMHR [Love Music Hate Racism] Smith also embarrassed the party by forging a relationship between our organisation and the jazz musician Gilad Atzmon. Smith invited him to speak at Marxism in 2004, when Atzmon began spouting some of the anti-Semitic rubbish he now specialises in. Despite SWP members challenging Atzmon from the floor, Smith continued inviting him to SWP events, and to perform with him at concerts as late as 2007.

After Smith was finally forced to step out of the SWP leadership, for embarrassing the party rather than because of anything he was actually alleged to have done to female party members, he also stepped down from his UAF position.

Unsurprisingly, Atzmon defended Smith, although probably not in a way Smith would have liked to be defended:

Between 2005-10 I worked closely with Martin and the SWP. At the time I was the SWP’s official Kletzmer. I toured with Martin, performed and spoke in quite a few of those Red gatherings. I met some very nice people in the SWP, but I also came across their many Jewish gate-keepers and tribal operators. But the one thing I never detected in any of those political gathering was a trace of libidinal enthusiasm let alone sexual desire. I assumed at the time that these militant young Marxists had decided to postpone having sex until after the revolution.

However, it didn't take long to realise that Martin Smith was not being pursued because he is a ‘sex offender’ – he surely isn't – no, our so-called ‘progressive’ tribals chase Smith because he is a Jazz lover and an enthusiastic fan of my music. They harass him because he gave me a platform in spite of the Jewish demand to ban me. They want to bring Martin Smith down simply because he didn't obey his tribal masters. So If anything, it is Martin who is the rape victim in this saga – he is punished because he refused to bow down to the tribal junta.

Presumably, Smith's move out of full-time SWP/UAF work left him in need of income, so luckily for him a professor at Liverpool Hope University, Michael Lavalette (who happens to be a leading SWP member) got him a paid PhD studentship in, believe it or not, a Social Work department. He also started a blog called Dream Deferred which the SWP have promoted.

UAF have been less prominent since the Comrade Delta debacle, but they were the main component of the Newcastle Unites counterdemonstration against Pegida UK last month and are a major component of the forthcoming Stand Up to Racism and Fascism demo this coming Saturday. (George Galloway, another ally of Gilad Atzmon with dodgy opinions about rape, a speaker at both events - a bit ironic for a supposedly anti-racist organisation.)

More recently, UAF has secured funding from the National Union of Teachers (NUT) political levy to publish a magazine called Unity. Someone with no other web presence named "Milo Samuels" has been appearing in it, billed as "a Love Music Hate Racism activist".

For instance, in the most recent (Autumn 2014) issue, he interviews rock band Kasabian. (Kasabian played the Love Music Hate Racism festival in Stoke in 2004 - which Martin Smith organised.)

In the previous (Summer 2014) issue, he has an article on Billie Holiday's "Strange Fruit". (Coincidentally, Martin Smith used to show a documentary about the song at SWP meetings.) 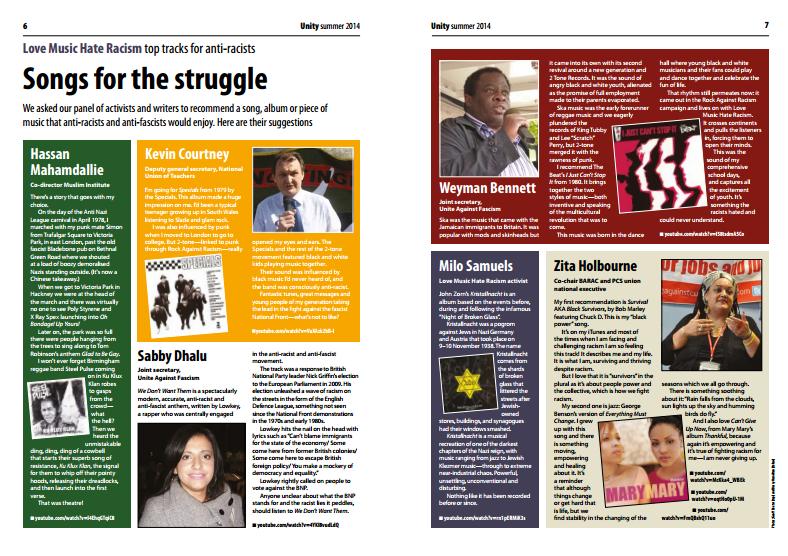 The Summer 2014 issue has a little feature in which, as the magazine puts it, "our panel of artists and writers recommend a song". Apart from "Milo Samuels", all of the contributors are reasonably well known; apart from MS, all but one of the contributors' slots are illustrated with their photos. MS nominates jazz saxophonist John Zorn, coincidentally one of jazz saxophonist Martin Smith's favourite artists,

Personally, I don't think trade unions such as the NUT should be funding UAF anyway, but if their money is paying a wage to Martin Smith I expect union members will have serious concerns about how their political levy is being spent.

You will find a list of UAF's officers here (the chair is Steve Hart of Unite and Hornsey Labour Party) and of the unions which fund it here (I'm ashamed that my union is one of them).

Added 15 March:
Credit for Owen Jones for saying he will boycott UAF if it turns out Smith is still involved. I wonder why he'd be involved with them anyway, as the whole purpose of UAF now seems to be helping SWP launder their reputation.