This series is going slower than I meant, so I'll have to rush out the final three quick as polling day rushes nearer... We started with David Ward in Bradford East, and now turn to Bradford West...


George Galloway has been MP for Bradford West since 2012. This week, he faces a challenge from Naz Shah, a radical, credible candidate with an extraordinary and inspiring story. I wish her success in this election. Why?

1. Galloway does not serve the people of Bradford. From the moment of his victory in what he called the "Bradford Spring", when he tweeted about his "Blackburn triumph", it was clear he couldn't give a monkeys about his new constituency (later attempting to make out he was hacked by tweeting "Nice try. Password now changed").

As far as I can tell from his Hansard record, he has mentioned Bradford once in parliament over the last year, while regularly mentioning Iraq and Palestine. His third? fifth? fourth wife, 31 years his junior, may or may not still live in the Netherlands, possibly eating in to his time in Yorkshire - although to be fair there are frequent KLM flights there from Leeds Bradford.

2. Galloway is basically a part-time MP. Although his links to his constituency are tenuous outside of election season, maybe he claws back a bit of time for Bradford by rarely turning up in Westminster. This year he's spoken in just four debates and attended  just a tenth of votes. On the other hand, he spends a lot of time in Beirut, where he is a TV star. He is, in fact, the third highest-earning MP in parliament. (The last prime minister is the highest earning, but gives it all to his charitable foundation. The other high earners are all Tory businessmen. Unsurprisingly,  MPs who earn the most from second jobs statistically "speak in fewer parliamentary debates, submit fewer written questions and miss more votes than other MPs".)

3. Galloway is a shill for dictators. So, what is he doing when he should be in Bradford or Westminster? Mainly, he is appearing on TV stations owned by authoritarian regimes: Iran's Press TV; the Kremlin-run RT (formerly Russia Today - on which see Nick Cohen, Oliver Bullough, James Bloodworth); and the Lebanon-based Al Mayadeen, which is politically supportive of Assad's murderous regime in Syria and is linked to Hezbollah (in fact, some claim it is owned by a cousin of Assad). These stations are not just based in authoritarian countries; they are PR mouthpieces for authoritarian regimes. Not only do they systematically distort the truth in the geopolitical interests of these extreme right-wing regimes, but they also regularly host Holocaust revisionists, 9/11 deniers, British fascists and other cranks. Galloway's politics fit in well with this; in a period when Assad's government, backed by Iran and armed by Russia. has slaughtered hundreds of thousands of Syrian civilians, Galloway has remained silent and actually used his scarce time in parliament to table a motion about a brief Israeli incursion into Syria claiming "dozens" of lives.

4. Whether or not Galloway is personally antisemitic, he contributes to an atmosphere in which antisemitic ideas move in to the mainstream. You'll know that a couple of months ago Galloway launched a libel claim against a Jewish journalist who suggested he might be antisemitic. I wouldn't suggest Galloway is personally antisemitic, but he seems to have a lot of time for people who are, and he seems very happy to cultivate an atmosphere around himself in which antisemitism can flourish. Galloway has championed antisemitic Holocaust denier Gilad Atzmon (he reads Atzmon's book to his wife in bed, apparently.)  Respect has had to apologise for antisemites again and again. Some point to Galloway's "Israel-free zone" claims and refusal to debate Israelis. This is bad for Bradford. Not long ago, Bradford Muslims saved its synagogue. Now, in an atmosphere nurtured by Galloway (and his Lib Dem twin in Bradford East) Bradford is a less comfortable place for Jews than it should be. [UPDATE: Read "A Jew in Bradford" by Ben Judah.] Most recently, Galloway has tweeted about Netanyahu celebrating his Muslim opponent's coming victory and retweets his followers' aggressive tweets about the synagogue. In fact, many of his most active supporters - people he regularly retweets - come across as antisemites, Holocaust deniers and conspiracy theorists - and antisemites have been at the heart of his coterie for some time.

5. Galloway is a bully. Whether or not Galloway was being libelled when he was called an antisemitic, his response to the charge - immediately sending threatening legal letters - is a good example of his pattern of bullying. We can see this bullying in his interactions with Israeli students, his interactions with Syrian oppositionists. We can see it in his response to "ThingGate", the light-hearted tweet by a local small business which he threatened as if he the feudal boss of Bradford. In fact, we can see it throughout his pompous and testosterone-soaked social media style, including even his tweets to me. 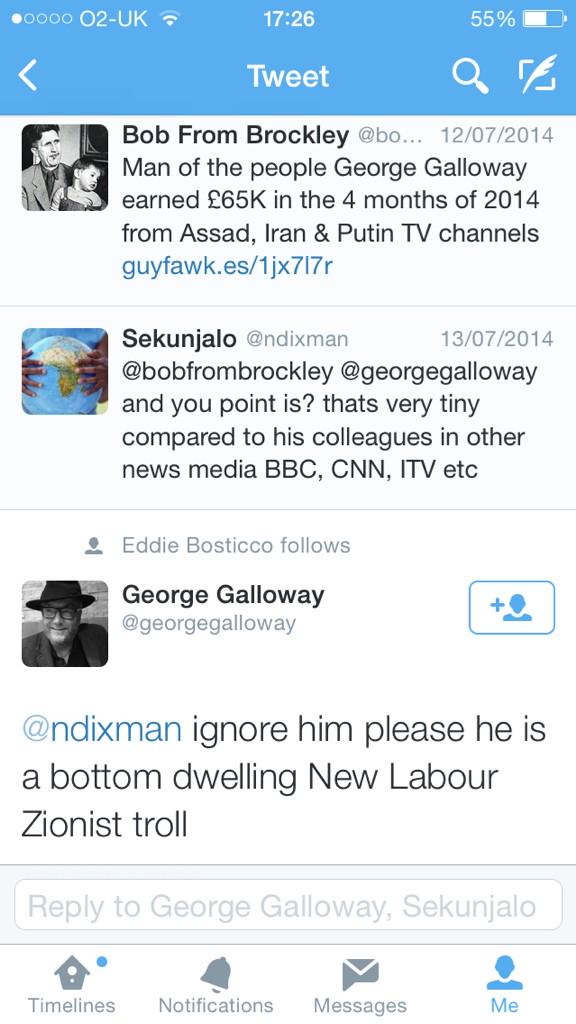 6. Galloway's sexual politics are deeply reactionary. His claim that Naz Shah's marriage was not forced because her parents consented (even though she didn't) was, as Huma Munshi puts it, "playing politics with Shah’s history as a forced marriage survivor." It indicates how reactionary Galloway's sexual politics are. Not surprisingly for someone with multiple overlapping marriages to increasingly young women (some civil, some Islamic), who works for Putin and the mullahs of Iran as his day job, and who is deeply soaked in socially conservative Catholic morals, this would not be the first time that Galloway's reactionary sexual politics have come out. The most striking incident was when he claimed that even if allegations against his fellow Russia Today employee Julian Assange these would not constitute rape but rather just "bad sexual etiquette". Galloway just does not get that marriage without consent is rape, that sex with some not conscious and therefore not able to say no is rape. In short, he is effectively an apologist for rape. Also read:
Coatesy on Galloway; Aisha Gill on the chance to overturn the patriarchal structures of local politics in Bradford; Huma Munshi on Galloway's sexual politics; Angry of Bradford; top Bradford tweeters; all my Galloway posts.

Anonymous said…
I am beginning to suspect that the resurrected soul of Saddam Hussain is living underneath George Galloway's hat (à la Harry Potter and the Philosopher's Stone).

My hope is that on election night, someone pulls the hat off to reveal the sickly face of Saddam Hussain attached to the top of Galloway's head.

Anonymous said…
This blog is about as far removed from reality that one could get. It's a kind of jigsaw puzzle of untruths, half truths and utter lies wrapped together in the the dispassionate blanket of impartiality. If you're could write about George you should take your time and dig deeper......otherwise you're just part of the problem.
06 May, 2015 08:06

bob said…
Anonymous,
I'd be curious which of the things I say you think are untruths or even half truths, let alone lies. I don't say anything in the post without linking to a source for what I say. I don't think there's anything here that's not a matter of public record. It's true I didn't dig deep (I'm not an investigative journalist, just an ordinary person blogging) - where would you suggest I dig deep? Are you saying that behind the mass of publicly recorded examples of Galloway's mendacity, when he's out of the media eye he does nice things?

Apologies though for the "dispassionate blanket of impartiality"; I am very passionate and partial in this. Anti-Jewish racism, rape denial and the slaughter of Syrian civilians aren't things we should be dispassionate about.
06 May, 2015 09:31

When you've finished digging I have a suggestion for what we might put in the hole.

paulocanning said…
It doesn't matter if he wins because he broke election law. And in a very similar way to Phil Woolas.