Pegida UK, UKIP and the mainstreaming of anti-Muslim bigotry

These are complicated and scary times. After fifteen years of murderous terrorist attacks by jihadis in the name of Islam coinciding with a period of unprecedented international migration, including the spectacle and tragedy of the current refugee crisis, the challenge of how we can live together in our communities is more and more urgent.

In this context, we should all be disturbed by the slow march toward the mainstream made by the entrepreneurs of panic who stoke the fires of hatred towards Muslims. Often claiming to be merely critics of Islamism, a growing number of pundits deliberately blur the line between Islamism and Islam and the line between Islam and Muslims, often circulating falsehoods or amplifying negative anecdotes that confirm their toxic ideology. At the heart of this ideology is a paranoid vision of Islam as a supremacist religion using mass migration to destroy "Judeo-Christian" Western civilisation.

Meanwhile, as Tell MAMA document, violent incidents against Muslims are on the increase in Britain. Hammer attacks on Muslim-owned shops in Birmingham, arson attacks in Oldham, a bottling of a Muslim man in Caerphilly, a machete attack in Welsh supermarkets, and many, many other unreported incidents.

Most adherents of the counter-jihadi ideology aren't violent, and most perpetrators of hate crimes against Muslims aren't ideologically committed counter-jihadis. Most hate crime is opportunistic, spontaneous, un-premeditated. As with non-violent and violent forms of Islamism, there is no conveyor belt from the ideology to the violence. But, as Quilliam put it when talking about Islamism, the ideologues provide the "mood music" for hate crimes. They provide justifications, narratives and targets for acts of violent hate. And in turn, the anti-Muslim mood music and the rational fear generated by anti-Muslim attacks feed narratives of grievance that jihadis both feed and feed off in recruiting British Muslims. In this way, jihadis and counter-jihadis come to seem more like best friends than actual enemies.

For a few years after 2009, the boozed up street theatre of the English Defence League showed how counter-jihadi ideology can provide a shape and a focus for half-articulated bigotry, resentment and grievance.

But the EDL's reach was also limited by its association with violence. It became a toxic brand. Since 2013, its founder Stephen Yaxley-Lennon (known as "Tommy Robinson") has been trying - with a bit of help from Quilliam - to launder his brand and break out of the association with hooliganism.

Tommy's attempted rehabilitation, though, kept hitting obstacles: racist tweets, continued associations with neo-Nazis, a string of criminal convictions for everything from drugs to mortgage fraud.

At the end of 2014, events in Germany gave him a new idea. There'd been HoGeSa (Hooligans against Salafists), a short-lived EDL-inspired bunch of racist football ultras, which had the same image problems as the EDL. But then came Pegida (Patriotic Europeans Against the Islamisation of the Occident), which for a while mobilised a more mainstream crowd: "a mixed group—known figures from the National Democratic Party of Germany, soccer hooligans, but also a sizable number of ordinary citizens", including educated middle-class people. Could this provide a model for breaking out of the hooligan ghetto and reaching the mainstream? 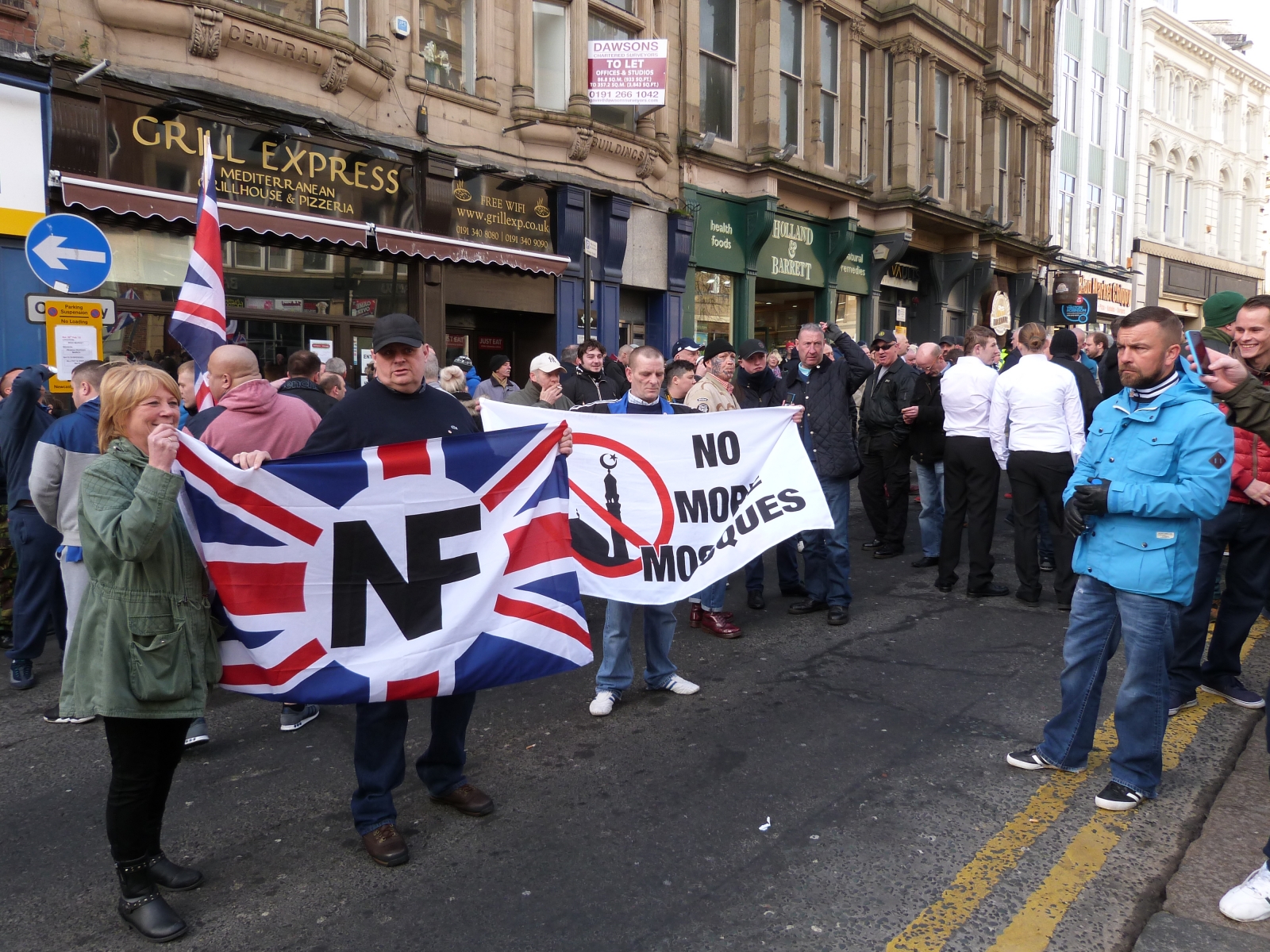 Tommy and his pals have  made a number of failed attempts at launching a UK franchise of Pegida. Known far right activists were among its early organisers; they invited American neo-Nazis to their events; and they found it hard to recruit spokespeople who could string a sentence together.

The news this week is that Yaxley-Lennon has anointed the double act of Paul Weston and Anne-Marie Waters to relaunch his pet Pegida UK. Both posh-voiced, and her having a left-liberal feminist background, the choice might be designed to speed the rebranding of the Tommy Robinson project away from its association with street thuggery and petty crime.

We've met both Waters and Weston on this blog before. Here's Weston:


[George Whale and Paul Weston founded] a party called "Liberty GB"... in 2013. Previously, they had a party called the "British Freedom Party", a BNP splinter which they tried to make into the electoral vehicle of the proto-fascist street thugs, the English Defence League - but this didn't work well because the EDL were more interested in booze-fuelled hooliganism than standing in elections. The British Freedom Party's logo was based on that of Oswald Mosley's British Union of Fascists, which kind of sums up Whale and his merry band.... Liberty GB claim to be opposed to "Islamisation" (whatever that means) and jihad, but a quick glance at their track record and election promises - banning mosques, deporting Muslims, banning halal food - show that they can't distinguish between ordinary Muslims and jihadi Islamists. This makes them racist. They have no place in our community.


Waters’ various online links to the EDL have been documented... The Mirror filmed her and another UKIP candidate speaking at a far right rally; they describe her as spouting anti-Muslim bigotry: “a lot of people need to be deported”, she said, and “many mosques need to be closed down”.

It's significant that Waters was a UKIP candidate (in Lewisham East) in 2014 and is on the UKIP list in the GLA elections for 2015. UKIP claims to have no links with the far right, but this right here is a pretty serious link. UKIP need to answer to this.