Back to the 1980s with Straight Left

Back in October, in my friendly advice to Jeremy Corbyn, I suggested that the no.1 priority for the party was to get a communications strategy. I suggested that putting Seumas Milne in charge of strategy and communication was at best a disaster, at worst a sign that fighting factional battles (not winning elections) was all Team Corbyn wanted to do. But I optimistically added that rumours that Milne's days are numbered were an encouraging sign we might have gotten past that. Sadly, the rumours turned out not to be true, and instead of losing Milne we have lost Simon Fletcher, his ideologically questionable (Socialist Action linked) but quite competent deputy.

Fletcher's replacement is Steve Howell, brought in from a PR firm in South Wales. Howell has not been politically active for a while, as far as I can see, but does have history: like Milne and Andrew Murray he was active in the Stalinist faction Straight Left. Howell, then based in Sheffield, led its Yorkshire group. Their faction was called "the artists" - most of its key figures were Oxbridge types, in contrast to the salt of the earth workerists who led the main rival tankie faction, the Communist Campaign Group.

At that point in the 1980s, hardcore Stalinists (known as "tankies" for their support for the tanks sent in by the Soviets to crush dissent in its various satellites) were fighting to keep the Communist Party of Great Britain loyal to the memory of Uncle Joe Stalin, who was seen as something of an embarrassment by its Eurocommunist leadership. Straight Left sought to re-orient the party towards operating in the Labour Party and trade union movement.

Some of the denunciations of its tactics by rival Stalinists from the time are amusing, but also a bit sinister now it finally has achieved getting some of its activists into key positions in the Labour Party.

This is from the ultra-tankie Leninist newspaper (forerunner of the Weekly Worker) in 1983: 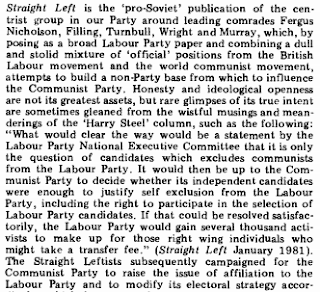 And this is about Straight Left's strategy of covertly using the Labour Party rather than Communist Party as the vehicle for promoting Stalinism, a strategy the Leninist denounced as "liquidationism":

I have no idea if Howell has, like Murray, remained true to his Stalinist roots. (His schoolmate and old comrade in Hendon Young Communists, Peter Mandelson, clearly hasn't.)

What is worrying, though, is that, like Murray, Howell seems to be rather soft on Syria's dictator Assad.

When I confronted @SeumasMilne about Syria, @FromSteveHowell implied I was an al Qaeda supporter. I was at a table with a Syrian refugee.
— Oz Katerji (@OzKaterji) February 27, 2017

Most recently, he's tweeted support of Tulsi Gabbard, the Trump-aligned and David Duke-endorsed US politician and her plan to stop the US funding Syria's rebels and civil society. When called out on this by Twitter, he responded with this tweet:

Some people in Britain are hurling abuse @TulsiGabbard on Twitter over her #StopArmingTerrorists stance. For record https://t.co/9hbidpJOzb
— Steve Howell (@FromSteveHowell) February 28, 2017

That's a link to a HuffPo blogpost by a completely oddball blogger who in 2014 was endorsing the far right Rand Paul for American president. The lack of judgement involved in thinking this was a decent link to back up your views is a bit of concern in Labour's new campaign chief.