Spiked and the right: some updates 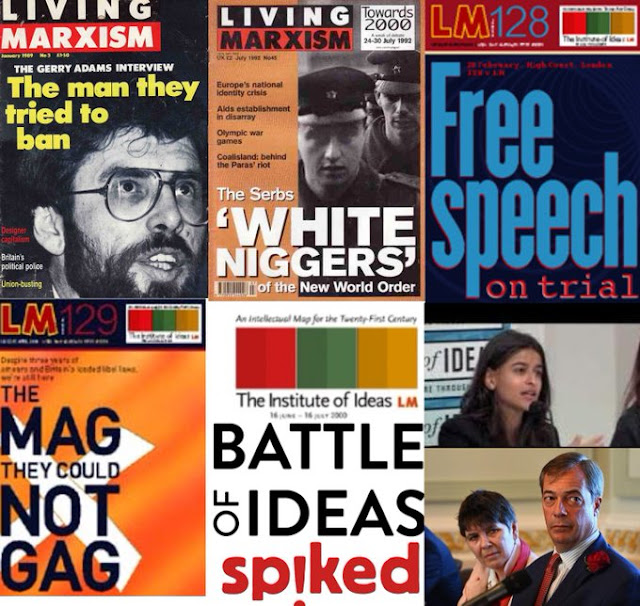 My last post on Spiked and its connections to the Brexit right got a lot of airplay. I was pleased to be asked to repost at Bella Caledonia, and to be the source for a very good post by Louis Proyect. Some extracts:


Today, I will be returning to the Spiked Online beat since an article by blogger Bob from Brockley on this tilt to the far-right has raised eyebrows, including my own. I have no idea who Bob is except that he follows me on Twitter and often retweets anything I write about Syria. My impression is that he is closer to Alliance for Workers Liberty, Marko Attila Hoare and other groups and individuals more open to NATO intervention than me. When I urged a vote for Jill Stein in 2016, FB friends who shared their orientation became so upset with me for supporting what they saw as an Assadist that multiple unfriendings took place, either initiated by them or by me.

Bob from Brockley’s 4,200 word article is titled “The RCP’s long march from anti-imperialist outsiders to the doors of Downing Street” is an eye-opening account of how the people behind Spiked have built links to the British far right. He mentions a couple of key examples. Boris Johnson has appointed his former deputy mayor Munira Mirza to head up his policy unit at 10 Downing Street. Mirza, of Pakistani origins, was a long-time member of the LM/Spiked network who while sharing her boss’s Islamophobia will help him pretend to be for diversity in the same way that George W. Bush exploited the hiring of Colin Powell and Condoleezza Rice.

Besides Mirza, there is Claire Fox, a prominent figure in the LM/Spiked network, who was elected to the European Parliament last year. Fox was director of the Institute of Ideas, a project that helped these people develop ties to powerful corporate figures, including Hill and Knowlton, the PR firm that promoted the accusation that Saddam Hussein’s military had plucked babies from their cribs in a Kuwaiti nursery and left them to die on the cold floor.

Bob from Brockley cites an article in Desmog, a website devoted to “clearing PR pollution”, that really has the goods on the corporate ties that Fox developed. I have to admit that I had not been paying attention to how deep these ties had become and am glad that others have continued to put them under a microscope...

To understand LM/Spiked’s evolution, it is necessary to look at the Communist Manifesto’s first chapter that is practically a paean to the bourgeoisie:

The bourgeoisie cannot exist without constantly revolutionising the instruments of production, and thereby the relations of production, and with them the whole relations of society. Conservation of the old modes of production in unaltered form, was, on the contrary, the first condition of existence for all earlier industrial classes. Constant revolutionising of production, uninterrupted disturbance of all social conditions, everlasting uncertainty and agitation distinguish the bourgeois epoch from all earlier ones. All fixed, fast-frozen relations, with their train of ancient and venerable prejudices and opinions, are swept away, all new-formed ones become antiquated before they can ossify. All that is solid melts into air, all that is holy is profaned, and man is at last compelled to face with sober senses his real conditions of life, and his relations with his kind.

Some of Leon Trotsky’s writing contains the same kind of giddy tribute to technology, industrialization and all the rest, especially in a work like “If America Goes Communist”. To a large degree, Marx’s writings on India have the same sort of breathless references to how the telegraph, railways and steamships will prepare the way for socialism. For Furedi’s followers, capitalism serves as the same kind of totem especially with nuclear power and GMO. Toward the end of their flirtation with Marxism, they became fixated on the concerns that the bourgeoisie had about unsustainable development. If unregulated capitalism undermined the basis for its own profitability, then the government had to step in. For LM that was mutating into libertarianism, this represented a “failure of nerve” of the sort that Ayn Rand fictionalized in “Atlas Shrugged”. In essence, Furedi and company called for the capitalist class to become more “revolutionary”, which meant allowing it to swat away government regulations. That is why the Koch brothers recognized them as kindred spirits and deserving of the hundreds of thousands of dollars they lavished on Spiked Online projects.

While it would be an exercise in futility to resolve some of the deep contradictions in LM/Spiked’s support for Brexit, you have to chuckle at the tightrope they walk over immigrant rights. As everybody understands, Brexit is largely motivated by nativism. Since the EU granted citizens living within its ambit to move freely from country to country, nativists like Nigel Farage sought to close the borders after the fashion of Donald Trump especially the legal immigration sanctioned by the European Union...

Capitalism has always been riven by a basic contradiction. It is both a system that binds the bourgeoisie and the working class in a single country under commodity production but that drives a wedge between rival bourgeoisies globally. After WWII, there was a temporary respite from trade wars and outright warfare under American hegemony but like anything else it had a shelf life under a system that is forced to operate under the tyranny of the marketplace.

In the next few years, the temperature will be rising globally because of greenhouse gases and capitalist competition between states like the USA and China. It will take considerable strength of character politically to resist the powerful forces driving us toward Armageddon. The flailing about of LM/Spiked is just one indication of how easy it is to be drawn into abyss. The urgency for a worldwide revolutionary movement is greater than it has been in my lifetime. I hope we can rise to the occasion.

I added a few footnotes to my post in this thread, unrolled here:

Thread by @bobfrombrockley: "NEW POST: The RCP’s long march from anti-imperialist outsiders to the gates of Downing Street brockley.blogspot.com/2019/07/the-rc… This pos […]"

...All In Britain’s main thing seems to be promoting Quillette-style right-wing ideas about race and integration (eg attacking “the anti-racist lobby in football” or saying hate crimes are no big deal), but giving it a more “diverse” vibe. https://t.co/IGPqK0RYNB cc @FFRAFAction
— Bob From Brockley 🥤 (@bobfrombrockley) July 31, 2019

...Here’s one of All In Britain’s main contributors, Rakib Ehsan of the Henry Jackson Society and Spiked regular, also seen writing in The Sun about how Boris can’t be a racist because some of his best Cabinet members are Asian. https://t.co/zfBRcW1Y22 https://t.co/RTqqOOnaus pic.twitter.com/oriODYnk8y
— Bob From Brockley 🥤 (@bobfrombrockley) July 31, 2019


You should also check out Andrew Coates' posts on Spiked. Coatesy also looks at Thomas Fazi, one of the Full Brexit allies of Spiked, and his version of left sovereigntism, drawing on a recent interview with James Meadway, who criticised Fazi and his associate Bill Mitchell.

Responding to my @SocReview interview https://t.co/8Eqn5vj0xP, @billy_blog says his “Reclaim the State”, written with @battleforeurope doesn’t praise the economic policy of Nazi Germany and accuses me of fabrication. But the evidence is there in black and white, on p.187 1/2 pic.twitter.com/45R3Vv63Rg
— James Meadway (@meadwaj) July 30, 2019