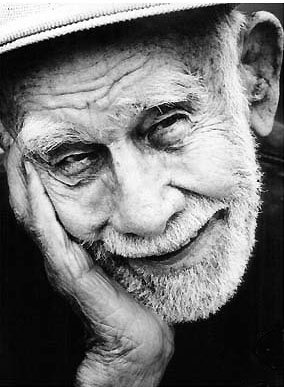 Just days after losing Isaac Hayes, soul music has another devestating loss: Jerry Wexler. Even more than Hayes, Wexler was a backroom guy in the music industry. Not famous, not a celebrity performer, but someone who changed the world of music fundamentally, and thus dramatically helped shape the world we live in.

Born in the Bronx, brought up in Washington Heights, a City College drop-out, Wexler was a New York Jewish kid, yet he somehow managed to gain an incredibly deep understanding of black music. I didn't know that it was him who coined the term "rhythm and blues", while working for Billboard magazine. He served in the US Navy in World War II.

Born in 1917, he was already close to 40 when he produced his first records at Ahmet Ertugen's and Herb Abramson's Atlantic Records, including the incredible music of Professor Longhair, then Ray Charles (meaning he was there at the birth of soul music) and Big Joe Turner (meaning he was there at the birth of rock 'n' roll). Leiber and Stoller, East Coast Jewish kids a generation younger, were also writing and producing for Atlantic in this period, also helping to reshape black music and invent rock 'n' roll. People like Wexler, Abramson, Leiber and Stoller give the lie to the image of Jewish people in black music that Spike Lee peddled in Mo' Better Blues. Far from the parasites embodied by the Flatbush brothers (as played by the Turturro brothers), Jews in black music played an important creative role. (See also Doc Pomus.)

The great Ray Charles biopic Ray features the lovely Richard Schiff, in a rare clean-shaven role, as Wexler, and I think it gets it exactly right, the importance of Wexler's contribution to Charles' music. Apparently, Wexler played the tambourine which opens Ray's "Ain't That Love"

In the 1960s, Wexler gave us Aretha's "Respect" and "Do Right Woman", Wilson Pickett's "Midnight Hour" and Dusty in Memphis. In the 1970s, he gave us Dr John's Gumbo and worked on Etta James' best (and funkiest) records. And he enabled Willie Nelson to reinvent country music, . Nelson's Shotgun Willie - co-produced with Wexler's friend, the Turkish Arif Mardin, half recorded at Atlantic in New York, half in Memphis - was the key record in "outlaw country", one of my favourite genres. Part of what the album did was reconnect country to its close relation, blues. Many of the white musicians - like David Bromberg and Wexler's close friend Doug Sahm, were well-versed in blues tradition, and there were string arrangements by Wexler's close associate, the (black) musical genius Donny Hathaway. [Added 19 Aug: Just listening to the title track at Popdose: incredibly funky, totally Wexler, deep soul - which is not what most people associate with Willie Nelson!]

At the end of the 1970s, Wexler worked with Deptford's Dire Straits in Nassau, fuelled by meat courtesy of Lobel's of Manhattan, allowing them to prove that, as Jools Holland once said, South London is Britiain's Mississippi Delta! He also took Dylan to Muscle Shoals for his wonderful, underrated Slow Train Coming:

"Dylan was in an evangelical mood, trying to convert me. He was in his Christian phase. And he's got the New Testament there, and he said, 'Did you ever get into this?' And I said, 'Bob -- forget it. You're talking to a 62-year-old, card-carrying, atheistic Jew.'"

He was an intellectual misfit, voraciously reading and loving the work of American writers like Faulkner, Hemingway and Fitzgerald - yet he was an underachieving student. His identified completely as a Jew, yet he was a vociferous atheist. He distrusted authority, but he spoke with certitude of taste. His opinion was not just another opinion.

And now I see that she has recorded a version of Pais Tropical.

Only thing I see similar to Madonna are the muscular legs.

Daniel of "Daniels Counter" said…
Thanks I thought it that boy was Jewish. Wechsler is a German Jewish name it means changer (of what ever)
19 August, 2008 15:14