Sorry that all my blogging lately has been either just links, or in the comment threads. Here's another batch of the former.

Les
Instead of starting with Libya, as my recent posts all seem to have, I will start closer to home, with the lovely Les Back. Listen to him talking about dub, reggae and sound system culture; and read him about bombing  - the latter highly recommended.

Middle Eastern revolutions
A roundtable on the war in Libya and the Arab spring, from Reason.com. Two from the AWL: Ira Brekovic on the left on Libya and Gerry Bates on the battle for democracy in the Arab revolutions. Two from Dissent: Todd Gitlin on Tahrir Square and Feisel Mohamed on the Muslim Brotherhood. Another piece I missed in February, by Andre Glucksmann. Might have already posted this, but here is Hitchens still on form, on the Iraq effect.

Libya: A Libyan perspective from Tasnin. Uri Avnery on Gaddafi.

Syria: Not about revolutions, but about tyranny and its unexpected fellow travellers: Vogue to Syrians: Eat Shit 1 and 2. Michael Totten on the tyrant of Damascus.

Egypt: Patrick Cockburn on the fight to keep the revolution alive in Egypt. Amani Maged on Salafi violence in Egypt.

Liberal interventionism/responsibility to protect
Ian Williams on armchair anti-imperialism. Sunder Katwala on the Ivory Coast. Paul C on Rebecca Hamilton on Darfur (with an interesting comment thread, including a Sudanese nationalist recommending the appalling Mahmood Mamdani). Wilson Pruitt on Mamdani and Badiou on Libya, and Aziz Meshiea's response to  Mamdani's anti-imperialist diatribe.  JM Smith on the unexpected liberal hawks.

And, on a different side of humanitarianism, Jewlicious on how money for orphans in Malawi ended up at Madonna's kabbala cult in Beverley Hills.

Lewisham libraries in the age of austerity
Transpontine has the latest on New Cross Library. See also The Future of New Cross. When our libraries are closed down by a Labour council carrying out Con-Dem cuts, and they are replaced by "social enterprises" running "community libraries", staffed mainly by BigSoc-style volunteer labour - what is the correct political response? Answers on a postcard please, or in the comments box below.

Fisticuffs
Also at HP: on Lee Jasper, Andy Newman and the Terry Fitz affair. (Say what you want about Andy Newman, but you have to admit he has superb taste in music.) 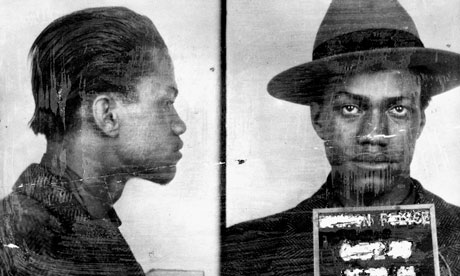 Food for thought
Three fascinating readings suggested by Noga, on Hitler-loving Jews, Arab Jews and the right of return. CiFWatch on the Orwellian Orwell prize nominees.

Iz/Pal:
The life and death of Juliano Mer Khamis - reflections on a tragic death, which bear on the issue of binationalism we looked at a while ago: from Ralph Seliger, Avi Shavit (h/t Engage), Gideon Levy and Jonathan Holmes. I will not link to the Angry Arab or Harry's Place posts on this death, because I found the atmosphere at both rather unpleasant. Here, however, is one of the comments from HP:

[The Freedom Theatre in Jenin Refugee Camp] survived for years, despite having a Jewish Israeli at its helm. Other cultural institutions also survive and flourish, including the music school I work for here. If Palestinian society was as sweepingly intolerant and morally bankrupt as you claim this would not be the case. As usual, many HP respondents latch onto the aspects of this story that fit their agenda.

Tonight there is a performance of Ionesco’s “The Chairs” (in one of the theatres) in Ramallah which I will go to without any expectation of being knifed as I leave. Soon there will be an international dance festival. The fanatics who murdered this man do not define the place, as much as you would wish them to, and as little as I want to marginalise their significance.

levi9909 said…
Bob - a comment of mine to the Guardian and Libya thread keeps disappearing. If it's been lost altogether, you can copy it from the bottom of this post.
http://tinyurl.com/3eww8nz

skidmarx said…
Say what you want about Andy Newman, but you have to admit he has superb taste in music.
Another question to which the answer is no.

Hitchens' piece is just nonsense.Brekovic is amusing is a sectarian sort of way, maybe it would be better if all the politics were stripped out and only the varied abuse left.

Adam Levick's capacity to twist and turn prose in a way which assigns maximum malice to Rachel Shaabi seems to have no limits.Perhaps this comment on one of his fellow CIFWatchers is relevant:
HP Sauce includes contributions from someone who calls themself 'Israelinurse' and lives in the Golan...

"If you want to be coherent, you should boycott Palestinian produce as well [as produce from the settlements]. Since they live in what legally is not their country, every single Palestinian is a settler as well."
????
09 April, 2011 10:50

skidmarx said…
And the last Contentious Centrist piece is a bit contentious in its claim that the Law of Return would only be racist if it discriminated against Arab Israelis: I did see the same claim, ignoring the racism against Arab Palestinians, somewhere else recently but can't recall where.

James Renton was on a Nazi Collaborators documentary on Yesterday with Gilbert Achcar concerning Haj Muhammed Amin al-Husseini.Achcar's conclusion was that he crossed the line with his request to European governments that they send Jews to Poland, but didn't suggest that this delegitimised the Palestinian struggle altogether, so might have to be considered objectively pro-fascist himself.
09 April, 2011 16:10

"The law does not discriminate among citizens. It determines who may become one. The principle of repatriation in a nation state is grounded in both political morality and international law. The United Nations’ 1947 resolution approving the establishment of a Jewish state was meant to enable Jews to control immigration to their country. Similar immigration policies based on a preference for people whose nationality is that of the state have been practiced in European countries, including many of the new nation states established after the fall of the Soviet Union. The need to preserve a national majority, especially in cases where the minority belongs to a nation that has its own, adjacent state, is not unique to Israel."

I think I understand in what misconception skids's contention is rooted. Ruth Gavison's undisputed premise is that israel is a perfectly normal nation-state, like any other nation-state in the world and therefore is entitled to the same rights and privileges that accrue to other nation-states, such as deciding on their immigration policies without being labelled racist for it. Skids gets all hot and blue in the face whenever such premise is taken without any qualification, such as that for Jews to claim statehood in their historical homeland is simply an outrage to moral reason.
09 April, 2011 17:15

"Mer-Khamis may also have believed that he was "protected" by the patronage of the former head of Jenin's Al-Aksa Brigade branch, the Fatah-sponsored militia, Zakariya Zbeidi. Zbeidi, who downed arms a few years ago, served as the theater's a co-manager, giving Mer-Khamis and the whole enterprise a patina of legitimacy. Zbeidi is a Palestinian resistance icon: Shot and imprisoned by the Israelis during the First Intifada, he had been one of the Second Intifada's symbols, for years successfully evading Israeli hit squads and drones.

Mer-Khamis's death had in a way closed a circle. His mother, Arna Mer, also a peace activist, in the 1980s, had set up and run a children's theater in Jenin. Zbeidi had then been one of her child-actors. Mer-Khamis founded the Freedom Theater in 2006."

A story waiting to be made into a movie, better than "Miral", I think ...

I've never been angry with Mer about his conversion. It was a true conversion and a natural one, in my opinion. As the mind and heart grow older, and the self more secure, they tend to insist on bringing out those parts in their identity that had made them feel uncomfortable during the salad days. And there is no zeal more true than the zeal of the true convert. And because of this sudden and violent interruption of his life, we have no way of knowing where his journey of self-discovery was going. And that is sad. Israelis remember his implacable statement:

"If the Jews want to live among us [Arabs], ahalan wasahalan [they are welcome]"

JM said…
ooh, you weren't joking about the Angry Arab post on Juliano Mer Khamis's murder. I mean as this seems to show, he was fairly favorable in Palestine:
http://www.ww4report.com/node/9751
09 April, 2011 21:36

levi9909 said…
I think you'll find that the Law of Return is the main mechanism for internal segregation within Israel's pre-1967 boundaries. I believe, unless something has changed recently, there are still laws, by-laws and regulations for various institutions that make reference to people "eligible for citizenship under the law of return", usually in terms of a benefit, though sometimes in terms of an obligation.

So Israel can make laws that are segregationist in their intent and application without the embarrassment of naming the beneficiary community.

Another flagrantly racist law is the Absentee Property Law.

I've been opposed to intervention in Libya due to stuff like this potentially happening;
http://www.telegraph.co.uk/news/worldnews/africaandindianocean/libya/8436032/Libya-more-rebels-killed-in-Nato-air-strikes.html

and two, even johann Hari is against it:
http://www.independent.co.uk/opinion/commentators/johann-hari/johann-hari-were-not-being-told-the-truth-on-libya-2264785.html
10 April, 2011 00:46

Hari: A good article, which I read yesterday and planned to include in my next miscellany. Interesting that it puts at centre-stage the coltan issue I mentioned in my post here http://brockley.blogspot.com/2011/04/case-against-liberal-interventionism.html but with opposite conclusions. I might have to re-think what I said there.
10 April, 2011 09:05

skidmarx said…
Susan Rice making clear the unconditionality of America's support for Israel, (plus other stuff, it's actually the Reps on the committee that do the Ziocentrism thing, honest guv).

JM said…
The Telegraph article shows the error of intervention in general, even if the U.S. intervened peacefully, they'd likely try to co opt it,though it could have also been something brilliant in the end, granted such as what we're seeing in Egypt right now with citizens vs military. All that said, I think this should come from the Libyan people, not just a self appointed leader who's an ex Qaddafi employee.
11 April, 2011 01:41

levi9909 said…
I've just had a comment from a Palestinian woman about Angry Arab's post on Juliano Mir Khamis:

"There´s more than a tinge of contempt/disregard in Abu Khalil´s post about Khamis. It´s one thing not to know who he is, but it´s another to insinuate that Khamis is mourned and cared for because he is half Israeli. Shame on him for saying that."

Thank goodness she didn't see the Harry's Place post and comments. She might have been really upset.
12 April, 2011 23:53