I miss you Norm 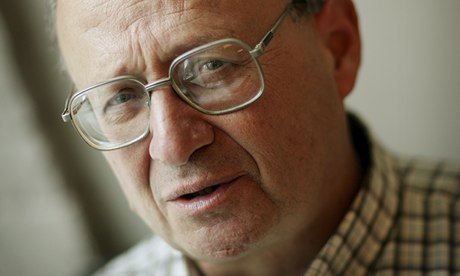 On Wednesday night, I was reading my six-year-old his bed time story: The Strange Bird by Adele Geras. It's a story we both love, but it's had a poignant edge for me these last months, since Adele Geras' husband Norman has been ill. I realised I'd not heard from Norm on Twitter for a little while, and I wondered how he was doing. I was terribly sad to hear on Friday morning that he had passed.

Like many people who are missing him, I never met Norm, but I feel he knew him well. I had read some of his work on Rosa Luxemburg and on philosophy and the Holocaust before I met him in the early noughties in the digital world, but it was through his blog that I came to know him. When I started blogging in 2005, his was one of the first two or three sites I linked to (along with Harry Hatchet, who remembers Norm here), and I was proud that Normblog was the first site to link to mine.

At that time for me, like many people missing Norm now, the off-line world had become a politically lonely place. So many of my fellow-leftists seemed impossible to communicate with any more, maddened by the war on terror, by Bush Derangement Syndrome, by Blair Derangement Syndrome. Among my leftist friends, the dominant modes of thinking seemed to be anti-Americanism (of the "chickens coming home to roost" variety), conspiracy theory, moral relativism, and a kind of anti-imperialism of fools that reduced all evil in the world to an effect of "Western" perfidy. Anti-racists started saying things that I found antisemitic.

In the on-line world, Norm helped create a community of people who remained committed to the values and analyses that had brought us to the left (internationalism, global justice, class analysis, universal rights, etc), while seeking to understand and fight these various disastrous pathologies. Finding this world was such a relief, and I have made close and enduring friendships from contacts made on-line as a result of that.

The Euston Manifesto in 2006, which Norm co-wrote, began to summarise our position (although I did not agree with all of it), and our on-line community became almost a movement. We were derided as apostates. ex-communicated from the left. The term "decent left" became an insult. Because of our internationalism, we were seen as hawks and "liberal imperialists". Being attacked as "neocons" (and "Ziocons") sometimes made us feel we had more in common with the real neocons than with the left. Some of us left the left altogether, or felt the left/right division no longer meant anything.

Norm did a lot to make this constellation in particular, and a wider trans-Atlantic blogging world too, into a genuine community. He reached out to people, directed readers to new blogs, was kind and generous in his comments. His "Normblog profile" series (I was proud to be no.235) was a good example of that.

His active participation in various blog "memes" helped weave an intricate web of connections between us. (When he became ill, I gave an example of one meme, in which he responded generously but critically to a post of mine, making me think again, as he so often did.

There are too many lovely appreciations of Norm on the web to link to, but among the ones that have especially resonated for me are by Martin the Margins, Ben Cohen, JP Pagano, Citizen Sane, Flesh, Chris Brooke, Max Dunbar, Nick Cohen. Engage has collected some of his greatest hits here, and Soupy is collating some of the obits.

The lovely Damian Counsell has collected some of the tributes here, and reading through them now, I keep seeing more reasons to miss him.

Damian's own tribute is particularly worth reading, although (and because) he comes from a different place from most of the rest of us politically, and because of his insight into why Norm's particular style of blogging mattered so much. Eve Garrard's piece, which responds to Damian's, is very good too. She says:


Damian, in his excellent piece about normblog, A Fine Site, explains why he admires Norm in spite of his Marxism, which Damian entirely rejects. To my considerable surprise, I no longer share this view. I’ll never be a Marxist myself, but I now think that Norm’s liberal and democratic form of Marxism was a powerful element in his distinctive moral stance, the stance which made him the splendid thinker, blogger, and comrade-in-arms whose loss so many of us are now mourning.

Eve is someone I've met (and instantly loved) in the real world. She doesn't have a blog of her own, but she wrote wonderful and important guestposts on Norm's site - another of the great services to us all that Normblog provided. As John-Paul concludes: "Norman Geras was a great man. We are all poorer for his loss."

I don't share Norm's love of cricket, and I only like some of the sorts of novels he liked. But his taste in music was impeccable. Emmylou Harris was one of our shared favourites, so I'll play her now.

Sarah AB said…
Thank you Bob for this thoughtful tribute which chimes with many of my own reasons for valuing Norm (and Normblog) so much.
20 October, 2013 08:53

Kolya said…
I admired Norm for all the qualities you so eloquently describe. But I'm perplexed by his continued self-identification as a Marxist. I, at least, have never come across any other Marxist like Norm.
20 October, 2013 10:29

Peter Risdon said…
I posted this on Facebook yesterday:

Norman Geras's death has been on my mind since his sister, Sue Leaf, told me about it early yesterday morning. I'd had an idea to message him privately, a few days ago, for some reason, but couldn't think of a good way of saying "I hope that dying isn't too bad at the moment". Then David Toube mentioned he'd had a stroke and though later that day Sophie Hannah told me on Twitter that he was doing a bit better, the worst seemed likely.

The hind part of my brain still expects to see a new post at Normblog, though. Even when you disagreed with him, the tightness of argument was a pleasure to read. The fact that I, and people like the conservative blogger Tim Blair, held someone we disagree with about politics in such esteem was partly to do with his personal qualities and partly a reflection of our times.

Disagreements with Norm about politics weren't the issue. The issue was the stuff that comes before. I hope his greatest legacy is a full adoption of the doctrine of the Responsibility to Protect, something he did serious work helping to lay down consistent and thorough foundations for.

I only began reading Norm's blog around two years ago, but it soon became a "first stop" whenever I went online. I found his writing to be thought-provoking, on the point, and (thankfully) devoid of mean-spirited attacks on others.

Norm's writing made you think. It caused you to look at the world and your own views of it and maybe do a re-assessment. It certainly had that effect on me.

I never met Norm Geras, but I loved and respected his writing and will miss him. The world is truly a poorer place now.

sackcloth and ashes said…
This is an excellent tribute.

I found Norman Geras' blog six years ago and was a regular visitor. I am bitterly sorry that he is gone, because the democratic left in Britain needs more people like him.