In which, once again, we list some of the things wrong with today's left.

First, Sarah Ditum on why displaying our own liberal cleverness is always a worse strategy than sharing human stories. Ditum exposes the left-liberal intelligentsia's masturbatory performances of smartness as bad politics in a human world, suggesting that such performances won't win people over even when the facts are on our side, as with welfare reform and migration. In relation to migration, this is a point Jill Rutter has made recently too:


"economic arguments will not persuade a sceptical public about the merits of immigration... most of the UK-born do not see immigration in terms of its economic benefits. Most people I interviewed struggled to articulate the benefits that immigration might have brought them, even those from higher income brackets.The economic impacts – for example – on food prices, or fiscally, are abstract and difficult to quantify. At the time of a squeeze on living standards, most people do not ‘feel’ the benefits of immigration to their everyday lives, except on a superficial level in relation to a wider choice in food or cursory gratitude to migrants working in the NHS." 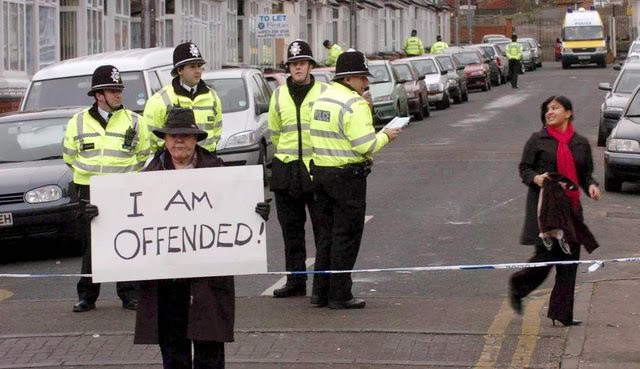 Second up,  Michelle Goldberg on what's wrong with the anti-liberal left: Goldberg analyses the converse, anti-intellectual folly of the new illiberal left and its culture of "repressive tolerance". By this she refers to the use of trigger warnings, call-outs and no platforming to deny free expression in the name of some spurious idea of social justice: the politics of the hashtag attack dogs.

The liberal fallacy and illiberal folly they invoke have this in common: both dis-engage the unconverted from politics; both play to a gallery of clued-up insiders. And thus both help maintain the disenchantment and sense of hopelessness of the majority, and both help maintain the grip of elites on our body politic. (See also James Bloodworth (☚): Want to defeat UKIP? Then get more working class people into politics.) And the repressive tolerance Goldberg describes also plays into something Nick Cohen and Kenan Malik have written about many times: the culture of taking offence that has gripped our world.

On our next pathology of the contemporary left, the anti-imperialism of fools, Nick Cohen (☚) recently wrote a superb deconstruction of Noam Chomsky's position on Crimea, showing how Chomsky's take exemplifies the double standards of the "anti-imperialist" left. Somewhat updated, but still very incomplete: this long resource list includes several texts on  left antisemitism, conspirationism and left-right convergence, and a few on philo-Islamism, vicarious social patriotism, Third Worldism and the anti-imperialism of fools. Some of the more recent ones include: Nick Cohen How the left turned against the Jews (2012), Sean Matgamna The SWP and Israel (2013), Colin Shindler  The European left and its trouble with Jews and The Left and Israel: A Tortured Path (2012), Pham Binh The Anti-Imperialism of Fools and the Syrian Spring (2012), Allan Massie Israel, Palestine and the anti-Semitism of the Left (2012). (Here's a couple more, not on that page: Padraig Reidy on Katy Perry and the Illuminati.)

Alan Johnson, meanwhile, argues that the 20th century's anti-imperialism of fools is giving way to a 21st century "anti-establishmentism of fools" (illustrated by the alliance around the quenelle). Paul Evans (☚) linked to that piece back in January, along with a great article by Sean Wilentz on the cross-party cult of Assange/Snowden/Greenwald. Paul suggests that perhaps the old disciplined orthodoxies of Leninist democratic centralism were in some ways healthier than today's believe-in-anything political culture. I fear he might be right. Or, as Public Enemy puts it, 'If you don't stand for something you'll fall for anything'.

Before I finish, I want to stress that while this post (like a lot of this blog) has focused on what's wrong with the left, there's plenty wrong with the right. In fact, some of the things wrong with the left are also what's wrong with the right. The culture of complaint we see in the #CancelColbert version of intersectionalism is mirrored by a conservative panic about our young being desensitised and corrupted by all the bad stuff out there (a tendency Padraig Reidy (☚), in an excellent recent post, called "declinism"). And the tankie left's anti-imperialism of fools mirrors the isolationism of the Europhobic hard right, an isolationism that leads to the likes of Farage taking more or less the same objectively pro-Putin line on Russia and Ukraine as Stop the War and its ilk, a line long taken by mainstream Tories like Malcolm Rifkind. And so on.

ignoblus said…
The notion of intersectionality Jason Walsh uses, which I think you are using here too, conflates two very different things. One is the very real, illiberal habit of trying to stifle dissent that Goldberg rightly attacks. (Though I would not attack it quite as strongly, and I'm not sure whether you would either. I've seen you argue otherwise.) The other, though, is the actual notion of intersectionality. It may be that intersectionality as Walsh perceives it is the actual notion used on Tumblr and in some other spaces, but it is not the idea as I've seen it. At its best, it acknowledges that socialist organizations may be sites for the oppression of women at the same time that middle class women may oppress oppress working class men. It argues that there are many perspectives that all deserve the chance to control the agenda for a time, not that the relatively un-oppressed should be silenced. There's an argument used by anti-racists about the "oppression Olympics" which encourage everyone to compete for status of most-oppressed, when no one should actually want oppression. I think the problem is that few people who talk about intersectionality in order to enforce their views know jack about it. And that's not a new problem for the Left.
08 April, 2014 06:14

Anonymous said…
That article from Ditum calling for more emotionalism in politics and journalism was a f*ckin atrocity.

We need less, not more of that sort of thing, the right are better at it. It's easier to hit the parts of the brain which respond to typically rightwing topics by using emotional language than it is to do the opposite.
Fear is more easily spread than affinity, to put it shortly. That's not just an opinion, BTW, that's how the brain works.

And as for linking a lack of emotionalism to supporting asylum seekers, WTF?
Every single pro-asylum article I've read for the last decade has been all about pulling the heart strings in favour of the poor victims.
Plus it makes the cardinal error of confusing liberalism with the left.

bob said…
Ignoblus-
Good to have you visit. Yes, you're right. There is a gap between intersectionality as theorised over years - decades - by writers such Nira Yuval-Davis or bell hooks, and the pop notion of intersectionality prevalent among today's online activists (especially those for whom trans rights have become the ultimate test of correctness). My friend Cassandra of Crofton Park has promised to write a guest post on this, and I will remind her!
09 April, 2014 13:43

bob said…
Paul, I don't think Sarah Ditum is advocating "more emotionalism"; she's saying that recital of evidence does not persuade people while human stories do. This is surely true (the first half certainly is).

Yes, the right are better at it. The left are terrible at it. On welfare and migration, the middle market press trots out unrepresentative counterfactual anecdotes about scroungers, and this seems to trump the bigger factual picture with public opinion. That doesn't mean the facts don't matter; if the facts aren't on our side we need to change sides. But it does mean that reciting the facts won't persuade most people.

I know nothing about how the brain works. But I am skeptical about the very possibility we can objectively designate "rightwing topics" and therefore that we can say there are parts of the brain that respond to them.

Anonymous said…
"But I am skeptical about the very possibility we can objectively designate "rightwing topics" and therefore that we can say there are parts of the brain that respond to them."

Ask Karl Rove.
It's about appealing to the base parts of the brain, the parts we share with reptiles. Fear, resentment, those emotions are actually found in those parts of the brain. Things like sympathy and sharting are in the mammilian bits. Honest.

I'm not going to pretend I know a lot about it, but there's a fair amount of recent political-neuro research which has been done lately, mostly, sickeningly, by US rightwingers. It's clever, dark stuff.

And I'd say the population is still against asylum seekers, it's just that immigrants in general have joined them.