People Before Profit and the Jewish Lobby

Ray Woolford of Lewisham People Before Profit is a colourful character and prolific tweeter. A few days ago, he tweeted a striking image of haredi (ultra-Orthodox) Jews demonstrating, claiming that New York was at a standstill due to religious Jews protesting about Gaza. I don’t know if this counts as “viral”, but the tweet was retweeted thousands (although not millions) of times.

As it happened, though (and as several people pointed out to Ray on Twitter), the image (a photograph by Craig Ruttle of AP) was actually of an earlier demonstration in March,when New York haredim protested against a change in the law in Israel removing the special exemption of the ultra-Orthodox from military service.

This kind of reckless retweeting was addressed by Padraig Reidy in an excellent piece here.  It seems innocent enough – although it contributes to the excess of fog around this conflict, obscuring the facts which we need to rationally debate. And we might also wonder what rhetorical role the image of very Jewish-looking people protesting against Israel plays in an anti-Zionist narrative.

However, a couple of days later, Ray tweeted something a bit different. When asked why the mass demonstration of Jews wasn't being reported in New York, Ray suggested it was because a "Jewish lobby" controls the media: 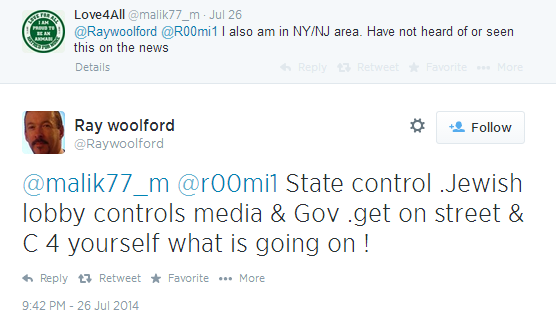 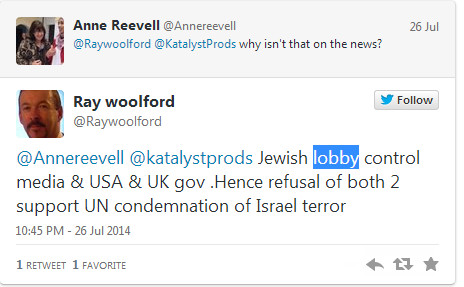 Then, as noticed by local tweeter Peter T, more: 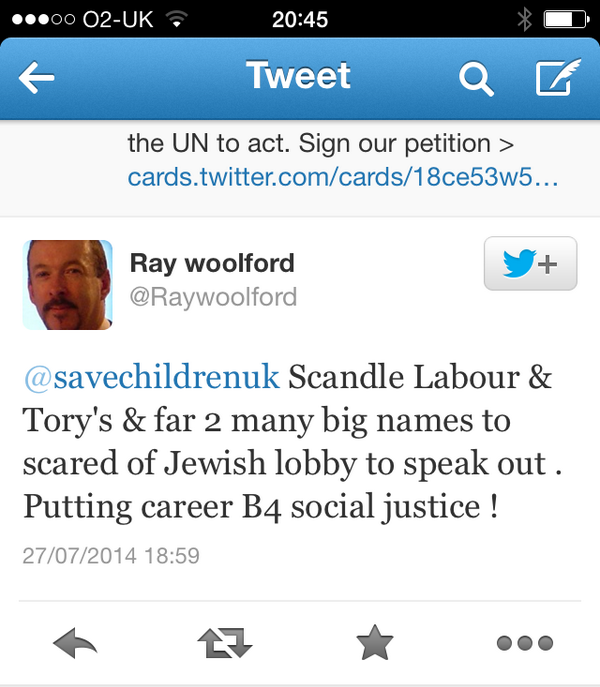 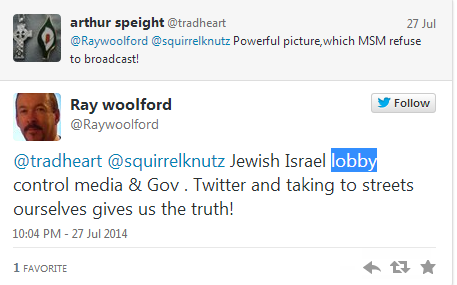 Later, Ray added that we needn't worry, because things would soon change:

Peter wrote to Lewisham People Before Profit, noting that the myth of Jewish control has been used for centuries to justify persecution, and asking what action the party might take given its claim to stand up for those overlooked by the powerful.

He got this back from leader John Hamilton:

So, Hamilton thinks the claim that an all-powerful Jewish lobby controls the media and people's minds and makes all politicians scared is "not in itself anti-semitic".

When Hamilton says "it is not surprising that Jews in general get blamed for supporting Israel", I wonder if he would say something similar about EDL attacks on Muslims. To me it seems simple: it is racism and not Israel that makes antisemites blame all Jews for the actions of Israel, just as it is racism that makes Islamophobes blame all Muslims for what jihadis do. There was plenty of antisemitism around before the creation of the state of Israel in 1948, and I don't think the Jews were any more to blame then.

It is also interesting that Hamilton finds it difficult to accept that Jews are an ethnic rather than simply a religious group. He thinks it is open to speculation whether the "religious beliefs" of media proprietors generate "the media bias" - ignoring the fact that none of the main media proprietors in the UK (Rupert Murdoch, the Rothermeres, Richard Desmond or Alexander Lebedev) have Jewish religious beliefs.

We'll see what the outcome is to their chat. But I won't hold my breath.

And if People Before Profit want a right of reply here, I'm happy for give it to them, as I did to Hamilton last time he dabbled with antisemites.

ADDED:
I had missed this from the early hours of 27 July, Ray retweeting about the Rothschilds:


All my Woolford/Hamilton/LPBP blogposts are now collected here. They include:

jcee said…
"...it is racism and not Israel that makes antisemites blame all Jews for the actions of Israel..."

The terms "Jewish" and "Zionist" are not synonymous. It is perfectly legit to criticize Israel's actions in Gaza and the Zionist right-wing element in that country - but unfortunately such criticism is being increasingly spun by Zionists and even leaders in the West such as Stephen Harper as "anti-Semitism." This has created a lot of resentment as the aim obviously is to shut down criticism of Israel under threat of the anti-Semitic smear.

Many prominent critics of Israel are themselves Jewish and of course many of the Orthodox completely reject the concept of a state and openly support the Palestinians. Criticism of Israel is not by definition anti-Semitic... however generalized attacks on Jews under the guise of Israel criticism is something else entirely and must be condemned.

Unknown said…
In reply to comment above - Right Wing Zionists as opposed to Zionist Right Wing. There are left wing Zionists who want peace with Palestine, Gaza to be free, Palestine to be a recognised state and in every way sound as left wing as they come - while also wanting Israel to be protected and be able to flourish. Zionism is not synonymous with right wing.
27 November, 2015 15:25