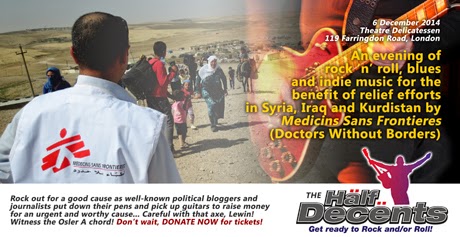 Some causes transcend political barriers. The plight of those trapped between the murderers of the Islamic State and the slaughter at the hands of Assad's forces is one of those issues.

On Saturday, 6 December, a band composed of bloggers, journalists and political activists from across the political spectrum will be playing a gig to support Medecins Sans Frontiers (Doctors Without Borders) and their vital work in the region.
Dubbed "The Half Decents", our ad-hoc band will perform a familiar blend of rock classics and blues standards, with a sprinkling of indie pop. The evening will be hosted at Theatre Delicatessen by 89Up, the public affairs agency (http://www.89up.org/), and will include guest speakers and a support act.

We're asking anybody who wants to attend to donate at least £10 to Medecins Sans Frontiers, via this special JustGiving Fundraising Page.

Meanwhile, the Dead Bloggers Society (of which Paul Evans is co-chair) lurches on. Here are some selections:

The key factors driving these changes have been economic and political. But many have come to see their marginalization primarily as a cultural loss. The same social and economic changes that have led to the marginalization of sections of the electorate have also made it far more difficult to view that marginalization in political terms. As the politics of ideology has given way to the politics of identity, as people have become disenchanted with politics, so culture has become more important as a lens through which to make sense of society and social relations.

Finally, a great game for the family, as invented by Jake Goretzki: bob said…
I've decided not to publish the link posted in the comments thread from an anti-Zionist who regularly leaves comments here, a comment which questioned whether it "rich Jews pulling the UK's political strings" is indeed a "myth", as the post suggests.

It should be obvious that the ideas of Jewish power, Jewish wealth and Jewish dual loyalty are all common themes of modern antisemitism.

The reason I won't post it is to avoid cluttering up the comment thread of my personal blog here with links to sites that circulate these sorts of ideas. (The site linked to claims that Jewish donors "unhesitatingly choose the interests of The State of Israel over those of the people of the United Kingdom".)

If these alleged donors are pulling the UK's political strings, they must be doing it pretty ineptly.
19 November, 2014 19:26

Richard Armbach said…
Firstly " it should be obvious" to whom ?

Secondly that is highly inaccurate. The site you referred to does not claim that " Jewish donors unhesitatingly choose the interests of The State of Israel over those of the people of the United Kingdom. " That is, that it is a characteristic of Jewish donors to do that.

It pointed out that THOSE Jewish donors do so. I would have thought that the truth of this was pretty conclusively established.