This post started in September, or possibly even August, as one of those round-ups of stuff I've read. It got kind of big before I posted it, so I split it up with this post focusing on the Middle East, but after a while I realised it wasn't actually about the Middle East at all.


The enormity and complexity of what's going in Syria, in Iraq, in Israel/Palestine and in the wider region makes it hard for me to begin to take sides or recommend courses of action. Rather, I will say something about how all this is refracted here in the West: in the leftish scene I move among, in the South London neighbourhood I live in, in the newspapers I read. Peter Ryley put this well in a brilliant post on the Gaza conflict, which I urge you to read in full:

Israelis hiding in bomb shelters and Gazans under fire will each have a different perspective, but they aren't the people I am writing about. Their fear and heartbreak is beyond my understanding or ability to verbalise. Nor can I write with any authority about policies or the wisdom, justice or otherwise of what is happening now. No, it is those campaigners and commentators, those demonstrators on the streets of European cities that concern me. They are people who are only too keen to fight a cause rather than attempt to solve a problem.

I'll start with an article from 2009, by Howard Jacobson, about how the war in Gaza brought the toxin of hate to quiet Britain (an article brought back to my attention by Peter). Among other things, Jacobson takes on the Gaza/Warsaw Ghetto analogy I recently discussed:

Given the number of besieged and battered cities there have been in however many thousands of years of pitiless warfare there is only one explanation for this invocation of Warsaw before any of those – it is to wound Jews in their recent and most anguished history and to punish them with their own grief. Its aim is a sort of retrospective retribution, cancelling out all debts of guilt and sorrow. It is as though, by a reversal of the usual laws of cause and effect, Jewish actions of today prove that Jews had it coming to them yesterday...

And so it happens. Without one’s being aware of it, it happens. A gradual habituation to the language of loathing. Passed from the culpable to the unwary and back again. And soon, before you know it...

And so it happens. It's happening in the Green Party, as Jessica Goldfinch starts to show in her post on Green Party support for Hamas and then in a more thorough Greens Engage post documenting some of the recent madness among the Greens. And its happening across our social movements, as Flesh describes in a post on why we need to more than flinch when anti-Zionism deforms our struggles, such as the fight to save the NHS. (Related: Jessica Goldfinch at Greens Engage)

Veteran labour rights activist Eric Lee attacks "the anti-antisemitism of fools", singling out Owen Jones who, Lee says, sees antisemitism everywhere except in front of his nose. I think Lee's criticisms of Jones are right, but his using the phrase "...of fools" is excessive, given the baggage of those words. Lee also contrasts Jones to the recently launched Campaign Against Antisemitism, which made the utterly stupid decision to invite anti-Muslim racist Douglas Murray to speak at its first rally.

Talking of Owen Jones, he had a great article on how the UK's cozyness with Arab regimes which actively support terrorism, including Saudi Arabia. The Stop the War [sic] coalition republished his article, out of a kind of whataboutery: why fight ISIS when we don't fight Saudi Arabia. Coatesy has a very good response to that, suggesting Stop the War might want to rethink their boycott policy in light of it.

Coatesy also has a piece on the SWP's stupid policy on ISIS. The SWP published an article which praises the Lewisham mosque, whose statement in response to the beheading of James Foley was described in the SWP paper as "refusing to bow to the frenzy, a spark of resistance in a very dark week.” You can read the Lewisham Islamic Centre statement here, and decide for yourself if it expresses a spark of resistance or something rather different.

However, as the world's attention shifted from Israel/Palestine to the ISIS assault on the Yazadis on Mount Sinjar and then to the their assault on the Kurdish city of Kobanê, there was something of a shift in the narrative. Rhodri Evans rather optimistically suggested that the left might returning to sanity after decades of blindfolding itself behind the dogma of "anti-imperialism". I was doubtful about this, but there have been some signs lately of something of a shift: the trade unions Unite and FBU have both made strong statements of solidarity with the Kurds, and a powerful open letter to the labour movement, entitled We Say Never Again, has been signed by a number of Labour and trade union activists. (Gary Kent, who I presume wrote it, has written an excellent article, "Taking on the vilest fascism of our age", in Progress calling for support for the open letter.) Even the jaded Nick Cohen, conceding that in these dark days the faintest glimmer of light can pass for a dawn, has concluded that "left-wing politics is becoming a little less seedy". Indeed, even some Stop the War activists have been heard calling for the Kurds to be armed.

While the trad left has been slow in expressing this solidarity, anarchists and anti-fascists have actually been more forthcoming. Celebrity anarchist professor David Graeber (credited with coining the slogan "We are the 99%") asked, in a powerful op ed in early October, Why is the world ignoring the revolutionary Kurds in Syria? Although a few ultra-ist  anti-American anarchos have laughably condemned Graeber as some kind of neocon, his position is widespread on the anti-authoritarian left. A particularly bracing example comes from veteran anti-fascist (and former Class War activist) Martin Lux, in his videocast on ISIS "the gap year blood cult".

Part of this is because of long-term concrete links between the Kurdish movement (including in its diaspora) and anarchists and anti-fascists in Europe, and part of it is because of the inspiring social revolution in Rojava (Syrian Kurdistan),  which is partly inspired by the libertarian socialist thought of the late Murray Bookchin (taken up by left-nationalist PKK leader Abdullah Öcalan during his time in Turkish prisons). An excellent list of resources about this has been collected by Andrew Flood here.

(Personally, I do find the on-going traces of Öcalan's earlier Third Worldist authoritarian nationalism, as well as the cult of personality around him among PKK supporters, cause for some caution. I also feel that the attention given to the Kurdish spring seems to deplete the space for attention from anarchists and the trad left for the Syrian revolution, which continues to cling to its resistance to Assad's brutal Damascus regime, after three years of bombardment by his forces. On this, see for example Not George Sabra, Liberated Kafranbel, and some of these tweeters.)

However, sadly, considerably seediness remains on the left. One of the worst examples comes from the student movement. Scottish Kurdish activist Roza Salih (pictured right) wrote a motion in solidarity with the Kurds, passed by the Scottish National Union of Students (NUS), then brought to the UK NUS national executive by Daniel Cooper of the AWL.

Insanely, the motion was rejected by the Executive after Black Students Officer (BSO), Malia Bouattia, claimed that the motion was Islamophobic because of the way it spoke about ISIS - see this tweet by Socialist Action's Aaron Kiely: 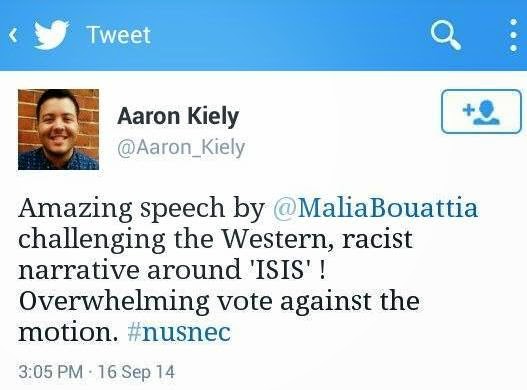 (For details, see report by Cooper, or the relevant bit extracted by Shiraz Socialist, as well as later summary by Beth Redmond.)

Finally, returning to where this post began, here's another disturbing incident in my local university, Goldsmiths, where a Student Union assembly appears to have voted down a motion to commemorate the Holocaust because to do so would be "Eurocentric" and possibly also because it is incompatible with the Union's "anti-Zionism". Unfortunately, the only report we have so far comes from the unreliable scurrilous right-wing rag The Tab, (I plan to write a fuller post about this at some point, so if you have anything to add please get in touch with me.)

So, if anarchists and part of the trad left shows signs of getting priorities in order, this is not true in the student left still gripped by idiot "anti-imperialism" and identity politics. There, pop-postcolonialism tells the hacks that condemning any bad stuff done by any Muslims is "Islamophobic", while the same body of thought suggests that condemning any bad stuff done to any "white" people is "Eurocentric", And so it happens.
Email Post
Labels: Izzy/Pal Middle East War on terror