What Cameron said about 70,000 moderate fighters, what he didn't say, and what he should've said 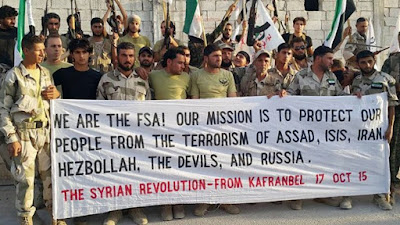 70,000 moderate opposition fighters in Syria? Never has a figure been so universally doubted.

Some people doubt it because they simply doubt any number and specifically any politician who uses a number, especially in justifying a war. The last time a figure was used to justify a war, everyone knows, is Blair's 45 minutes, and we were wrong to believe that so we don't believe this.

Some people doubt it because David Cameron's been caught being economical with the truth before and, well, he is a Tory isn't he?

Some people doubt it because they don't really read about what's going on in Syria apart from the occasional headline about ISIS atrocities, so they assume there's nothing going on apart from that. They mistake their own ignorance for proof that Cameron is lying.

Some people doubt it because they have a basically racist view of Sunni Muslims and especially Arabs. They're all fanatical savages who like beheading people, so how can any of them be called "moderate"? (The same racism underlies the idea that they need strong men like Assad or Mubarak to keep their fanatical savagery in place.)

Given the scale of the doubt, it's worth looking at what Cameron said, what he didn't say, and what he should have said. First, this is what he did say, first as a written statement then out loud in parliament:


"Although the situation on the ground is complex, our assessment is that there are about 70,000 Syrian opposition fighters on the ground who do not belong to extremist groups.”

"we believe there are around 70,000 Syrian opposition fighters, principally the Free Syrian Army, who do not belong to extremist groups and with whom we can coordinate attacks on ISIL."

Note what he didn't say:

So, what should he have said to be even more accurate? Something like this:

Although the situation on the ground is complex, it can be estimated that there are well over 70,000 Syrian opposition fighters on the ground who do not belong to extremist groups.

The word "moderate" is relative, and therefore pretty meaningless. However, although some of them are far from "moderate", these groups are sharply opposed to Daesh and are credible allies in our fight against Daesh and legitimate partners in building a post-dictatorship Syria.

They do not form one single cohesive force, but we can work with them to make them more cohesive.

Their motivation to work with us increases if we show that we are serious about removing Assad and if we show that any air-borne intervention we undertake is not reckless with Syrian civilian lives.

At the core of these are some 45,000 fighters in the two main FSA coalitions, the Southern Front and the Northern Free Syrian Army. Among these are the 14 Free Syrian Army units vetted by the CIA. (If you read Arabic, many of these groups are on social media, e.g. the Knights of Justice Brigade or the Falcons of al-Ghab,)

There are dozens of other groups, making up a further 30,000 fighters or more, some in large effective coalitions, which are on the spectrum towards al-Nusra but which are first and foremost about creating a free Syria. This analysis from the Institute for the Study of War shows which ones are independent (marked in green) or allied to or separable from al-Nusra (marked in yellow).

Add to these several tribal or ethnic militias. An example would be the Turkmen regiments (with 3,000 or more fighters) who came to Western notice the other week when they shot a Russian pilot.

In addition, there are Kurdish fighters. Most of the Kurdish fighters in Syria are part of the YPG/YPJ, the male and female militias of the political party PYD, although there are other smaller groups too. Estimates of  the size of the YPG/YPJ force vary between 25,000 and 50,000, but the more plausible claims are at the lower end of that scale. It has proved to be the most effective and reliable force against ISIS, and it has allied with four major Syrian predominantly Arab groups and a number of fighting groups in the Syrian Democratic Forces, SDF, which now has some 14 units giving allegiance to it and has made important advances in the North,  with US support. However, the Kurds are not interested in advancing into non-Kurdish territory, which means we cannot work with them alone.

Finally, there are a further 15,000 fighters in Islamist-dominated coalitions which have worked with other rebels but are also allied with al-Nusra. It may be possible to work with them, but we need to be very wary.

In short, not all "moderate", not a cohesive force, but definitely real, and definitely worth our solidarity.

That doesn't mean Cameron is right about anything else, that his Syria plan is the right one, or that everything is cool. Air strikes alone will not solve the problem and may be counter-productive. Our first solidarity should be with Syrian civilians and the non-violent resistance which represents them. But the anti-government, anti-ISIS fighters described here are a key part of any solution.

Previous: Stop the bombs; Untangling Syria's complexity; Why Patrick Cockburn gives bad advice; On the YPG; Listen to Syrians; Why Stop the War are wrong about Syria; The truth about Assad's bombs; From London to Yarmouk.
Email Post
Labels: Syria

Javey said…
Evening Bob.
Only just discovered your blog spot, but find it very illuminating.
Traditionally I might be thought of as a polar opposite to a "Marxist", but curiously I find much agreement I what you say.
Do you have any blogs "live" on the "Islamification of Eurpoe" thread, where dialogue with yourself is possible?

I find myself totally bewildered by the apparent fact that "Leftists" and "Feminists" appear to be throwing support to the defence of "Radical Islam", and can't get my head around this area.

Sven if you could simply direct me to good reading material on these issues I would be most great fun.