"Zio-trolling gets you bitchslapped onto the death camp train"

This is a brief account of an unpleasant experience in Twitter I had on Friday night. I thought it gave a fascinating insight into the convergence of various kinds of bigotry. Warning: not for the squeamish.

So, one of the main issues I follow on Twitter is the war in Syria. I have been a strong supporter of the Syrian Revolution, and opponent of the Assad dictatorship. One of the arguments made by supporters of that dictatorship is that Syria faces a choice between Assad and jihadism, the latter represented by ISIS or, in some accounts, by all Sunni Arab rebels.

The blurring of that last distinction - i.e. between ISIS and other Islamist rebels, and between Islamist and democratic or nationalist rebels - has been a major weapon in that pro-Assad propaganda arsenal. The blurring is widely accepted because of the prevalence of a basically racist worldview about Sunni Muslims and especially Sunni Arabs, which imagines them as all essentially fanatical savages. The success of the narrative was evidenced in the widespread scepticism about the UK government claimed that there are 70,000 "moderate" fighters in Syria - which is actually a wholly credible claim.

It has been bitterly ironic to watch "anti-war" activists now embracing the rhetoric of the War on Terror, which they so stridently opposed in 2001 and 2003, to try to discredit Syrian revolutionaries as jihadi savages.

Fadel has some form. You might recall the hoax he started about the Syrian refugee soccer coach, Osama Abdul Mohsen, who was kicked by a Hungarian camerawoman; Fadel smeared him as an Al-Nusra supporter:

Among those promoting the claim that Mr. Mohsen was a supporter or member of the Nusra Front was Leith Abou Fadel, the Syrian editor of a pro-government news site. Writing on Facebook and Twitter, Mr. Fadel drew attention to what he called evidence of Mr. Mohsen’s extremist sympathies on Sept. 13, five days after Mr. Mohsen was tripped by the Hungarian journalist Petra Laszlo while trying to avoid detention in Hungary.

The false story was of course widely circulated by right-wing anti-immigrant and anti-Muslim voices in the West:


Two days later, the screen shot of Mr. Mohsen’s Facebook page shared by Mr. Fadel was presented as evidence of the coach’s support for terrorism by Ezra Levant, a conservative Canadian political commentator (who has been faulted in the past for failing to check his facts and going out of his way to insult Muslims).

As a side note, Fadel is often used as a source by Kremlin media outlets. And if you look at the tweet you see how much it is amplified by supporters of the LaRouche cult that we met back here.

Then another tweeter jumps on Fadel's tweet to introduce him to me, describing me as an FSA "fan boy": 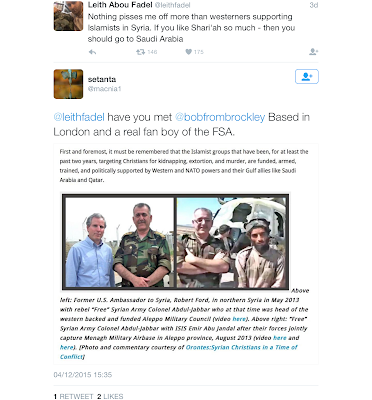 The picture he tweets, by the way, is of a former FSA officer photographer with the U.S. ambassador and then with an ISIS fighter, which presumably is meant to "prove" the CIA are behind ISIS and that ISIS and the FSA are the same thing. Or something.

Because I blocked him, I wouldn't have seen the tweet. (This is a major flaw in Twitter's harassment policy. Shouldn't blocking stop bullies tweeting at their targets, rather than just make the tweets invisible to their targets? Blocking actually encourages bullies to up the aggression.)

The tweet about me was hearted by Fadel, and by a woman whose Twitter profile describes her as a "commie pinko liberal feminazi", and retweeted by a Finnish leftist (her profile says "Loves Wikileaks OWS Anonymous") with over 25,000 followers.

Then someone else joins in, with more photoshopped pics of fighters in Syria, purporting to "prove" that not just the CIA but also Mossad are behind ISIS. (I won't go into details here, but basically there's a guy in a red beard who is a Georgian ex-soldier who had some contact with US military trainers then was radicalised in prison in Georgia and joined ISIS. Add those dots together and clearly the whole Syrian revolution is a neocon/Rothschild plot.) 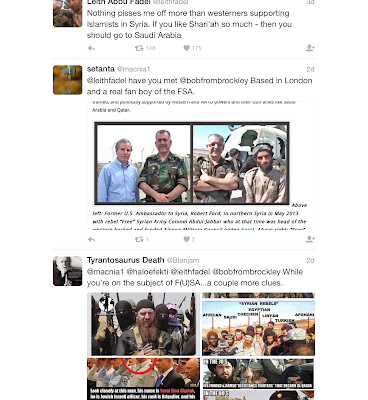 I then made the stupid mistake of one tweet engaging him. (Referring to the black person labelled "African" in his photoshopped pic, I said "because Africa is a country right?") I should have known better, as this unleashed a slew of invective, accelerating to Holocaust references immediately, in the tweet quoted in the title of this post. Although I'd not mentioned Israel one single time, my support for Syrian democrats was enough for me to be labelled a "Zionist" and "Ziotroll".

In a couple of tweets I was told I should get on the death camp train, given a choice between being made into a lampshade or being made into soap, and told to give his best regards to Ann Frank. 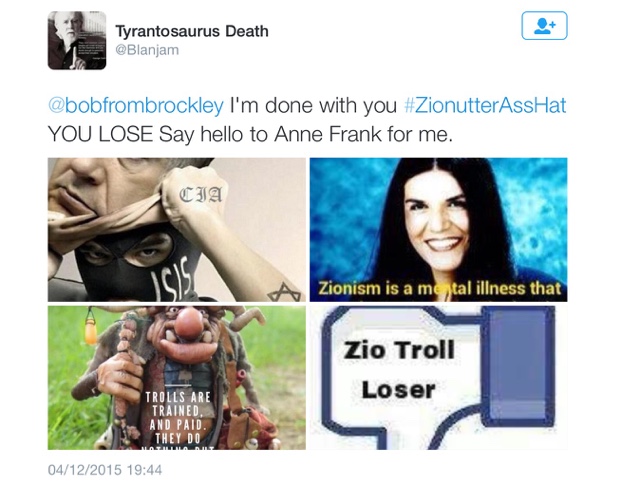 Not to mention this:

Within minutes, two more guys had piled in with him: one, who tweets that his "heart bleeds for Palestinians", who points out this isn't antisemitism because Jews aren't Semites, and someone whose Twitter profile is a link to the new-Nazi website Stormfront, calls the Holocaust a "narrative", and rants about "Talmudism" and such like:

Here are screenshots of the media tweeted by the the lampshade guy and the second guy who piled in. You'll see a full house of both classic and "anti-Zionist" antisemitic tropes, as well as 9/11 conspiracies... and an attack on Bernie Sanders. 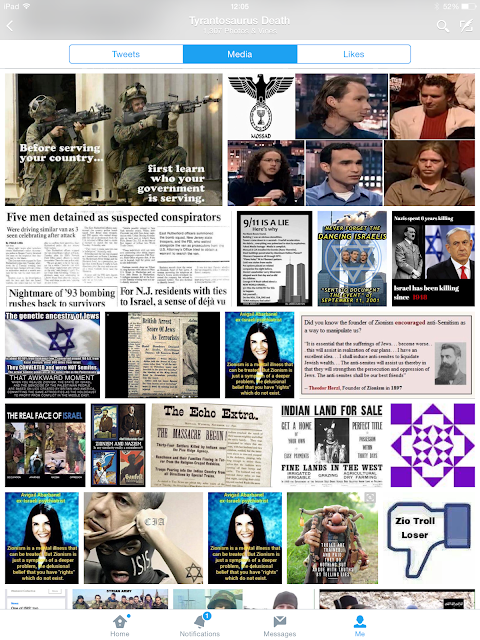 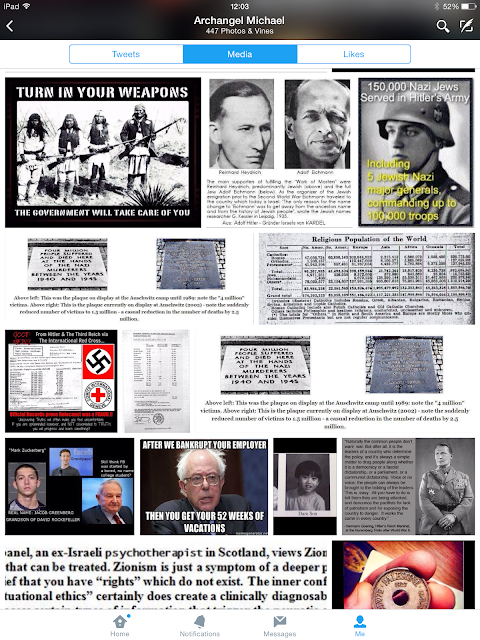 So, in a couple of clicks we move between anti-Sunni sectarianism, anti-Muslim racism and Holocaust denying new-Nazis. That's the kind of folks who think Assad is the lesser evil in Syria.

Paul Seligman said…
Deeply unpleasant. I haven't always agreed with what you write, but these responses are bad. I've only occasionally had one or two this vile. And it's a good point about blocking, although I always report anyne who is this bad. And Twitter never takes any action. But report them anyway?

Maybe there were many comments like this about me that I don't see because I blocked them. Blocking should stop any mention of your account.
11 December, 2015 00:14