Who is Tim Anderson?

This is the first in a series of posts where I simply cut and paste published information about some of the names I frequently see quoted on social media. It does not contain any new analysis,  but is designed as a resource to refer to if these names come up. It's going to go roughly alphabetically, so I'm starting with Tim Anderson. If I've missed anything, add a comment or DM me, and I'll update.

Timothy Anderson is an Australian academic whose memes on social media get quite a lot of air play among conspiracy theorists. In 2016, he sparked considerable controversy when he was invited to speak at a conference was organised by Stop The War and others about the refugee crisis, with no refugee speakers. He has been a key figure in the circulation of smears against the White Helmets, Syria's Civil Defense volunteers. 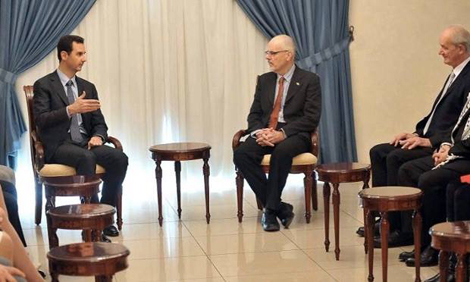 
[Tim Anderson] has campaigned in support of the Democratic People's Republic of North Korea, Fidel Castro's government of Cuba and Bashar al-Assad's government of Syria[1]... Cuba awarded him their Friendship Medal "as an acknowledgement of his unconditional solidarity towards Cuba and its revolution".[2]

He has been a critic of uninvited foreign intervention in Syria including the use of foreign funded groups, like the White Helmets, to call for humanitarian intervention in Syria.[3] He has described allegations the Syrian government was responsible for chemical attacks as a “hoax” and Assad as a “mild-mannered eye doctor”.[4][5]...He has visited Syria many times during the war,[6] and attracted criticism for visiting in late 2013, while the Assad government was conducting bombing of civilians and hospitals, schools and civilian infrastructure in opposition-held areas of Syria.[7] In April 2017 he co-hosted a two-day conference on Syria at the University of Sydney, described in the mainstream media as a "pro-Assad conference".[8] In September 2017, he travelled to Pyongyang and pledged solidarity with the North Korean government against aggression from the West.[9] He also attracted controversy in April 2017 for using a series of Anzac Day social media posts to accuse Australian military personnel of committing murder in Syria.[10]


Anderson is a routine defender of the Bashar al-Assad government, and has dismissed any suggestion it was responsible for the recent chemical attack on civilians in rebel-held territory. The academic said allegations the Syrian government was responsible were a “hoax”, and that Assad has been framed by the west.
He has visited Syria numerous times during the war, and met Assad in 2013, describing him as a “mild-mannered eye doctor”.
In an interview with state-run television posted online last year, Anderson praised “martyrs who died defending their beautiful country” in the bloody six-year war.

News Corp published a series of articles critical of Anderson this week. That apparently prompted Tharappel, to attack a News Corp reporter, Kylar Loussikian [of Armenian descent], on social media.

“Devastating intellectual critique by Kylar Loussikian, the traitorous scum who desperately wants a second Armenian genocide. How much did they pay you, traitor? I guess stabbing Syria in the back with that surname is the best way of telling the world that you’re for sale, right?”

Anderson in North Korea in 2017 with journalist Eva Karene Bartlett (right) and Young, their translator.

From an article by Omar Hassan in the Australian socialist magazine Red Flag the same month:

Nobody symbolises [the] coalition of neo-fascists and former leftists more than Sydney University academic Tim Anderson.  Once associated with the anti-war movement, Anderson has now made supporting the Assad dynasty his life’s work. This has involved churning out articles filled with recycled government propaganda, organising conferences and rallies in support of the regime, and even state-sanctioned tours of Syria.

His unique dedication to the cause of tyranny has been rewarded with an exclusive private audience with Bashar himself, the man responsible for the deaths of at least 400,000 Syrians. In a demonstration of the toxic endpoint of this political stance, Anderson also shared a speaking platform with a well-known fascist, Jim Saleam, and stood alongside fascists at a memorial for slain Russian ambassador to Turkey, Andrei Karlov. 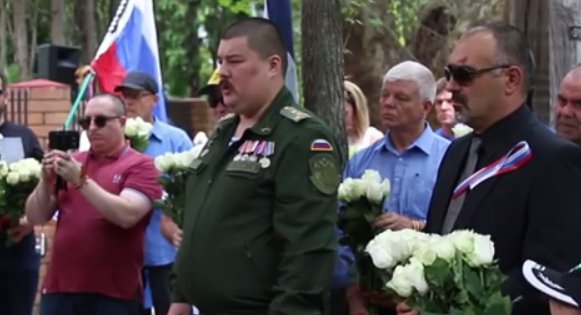 Tim Anderson (towards left, with flag) at a far right rally at the Russian consulate