The return of Stalinism on the British left?

Something grimly comic about a banner calling for "human rights" below pictures of Stalin and Mao. pic.twitter.com/oO939Zk6Tt
— James Bickerton (@JBickertonUK) May 1, 2018

Back in the late 1990s and early 2000s, in the heyday of the global anti-capitalist movement, the official TUC May Day march had become a dying relic of an earlier form of state socialism, dwarfed by the massive, lively, carnivalesque crowds participating in the unofficial (in fact, often illegal) parallel parades. With the fall of Communism in eastern and central Europe, it seemed clear that the authoritarian model of socialism-from-above had been a dead end; the submerged democratic and libertarian traditions of radicalism seemed to be re-emerging and filling the streets. After around 2003, these crowds died down, partly, I think, as their energy was siphoned off into protests against the war on terror, recuperated by the trad left parties who'd lost control of it in the post-Berlin Wall years.

Now, we seem to be seeing something even more disturbing. Stalinism, instead of rotting away in the dustbin of history, appears to be resurgent. The dwindling, ageing bloc of grey-haired tankies (many of whom actually remembered celebrating the Soviet tanks that rolled through Prague in 1968) who carried their hammers and sickles through London every May 1 seem to have been augmented by a new generation of tankies. Scrolling through pics of yesterday's march, it looks like there are more Stalins and Maos than ever before, along with a couple of Kim Jong-uns.

The rise of millennial hipster tankies tweeting stupid memes at anarcho-centrist dads like me might feel like a weak joke, but, sadly, the problem is deeper than that. I've already blogged about actual Stalinists in key positions in the Labour leadership -- such as Seumas Milne, formerly of ultra-Stalinst sect "Straight Left", the party's director of strategy and communications, or Steve Howell, also formerly of Straight Left, deputy director of strategy and communications, or  Andrew Murray, who only joined Labour from the Communist Party of Britain in 2016, or Murray's daughter Laura Murray, Corbyn's "stakeholder manager" (recently heard darkly muttering, Great Purge style, about the undue influence of "Trotskyists" in Momentum).


Closer to home for me, last week saw the bizarre AGM of Lewisham Momentum, half of which (apparently mostly young white men?) left the meeting to go to a noisy New Cross pub where they nodded in a slate of new officers (watch the video here) including, as "political education officer", believe it or not, someone whose social media profiles are replete with pictures of Stalin, as well as celebrations of Assadist war crimes denial - this Great Purge celebrated by Novara Media's Aaron Bastani as the #LewishamSpring.

So, about that #LewishamSpring. Momentum have elected Dominic Cerasoli as their "Political Education" officer. He's an anti-White Helmets conspiracy theorist that shares racist anti-Syrian posts on his wall. These are the people Momentum want educating youhttps://t.co/27wBbBQYsK pic.twitter.com/fLnn1Mrjt5
— Oz Katerji (@OzKaterji) April 26, 2018


When a political education officer of the most important faction in Labour in my constituency is promoting homages to dictators and denials of war crimes, it's a sign that something is very wrong. 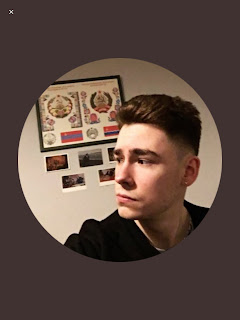 Added: See also this devastating report from a comrade at ShirazSocialism.

Jim Denham said…
A report from the London march:

Anonymous said…
PS On this year's London May Day the bright spot, similar in a way to the anticapitalist marches of around the turn of the century, was the vibrant Precarious Workers' Bloc - also made up mostly of young people including many anti-Stalinist socialists and anarchists... Sacha
11 May, 2018 16:41