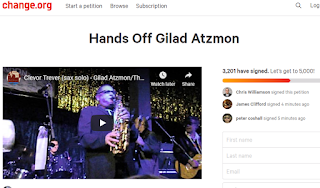 Since then I've learned that Atzmon, a former Israeli soldier, is not confined to the jazz world. I am told that in various blogs and in speeches he has adopted antisemitic language.
I wasn't aware of this until after I tweeted the petition.
— Chris Williamson MP #GTTO (@DerbyChrisW) December 21, 2018

I recently posted on Chris Williamson, the odious Labour MP who really needs to have the party whip removed from him. I didn't think Williamson could stoop any lower than he has already, but today he signed a petition defending Gilad Atzmon, tweeted the petition, then deleted the tweet, and later wrote a half-arsed non-apology. (Atzmon had been banned by Islington council from playing there in the Blockheads. Not sure I approve of this ban, as when he is playing saxophone in someone else's band he hasn't got a platform for his politics. But given how toxic he is, I'm not going to complain about him being considered a pariah.)

If you don't know who Atzmon is, here's over 13 years' worth of my blogposts about him. The short version is he is an Israeli-born jazz musician who long ago renounced his Jewishness, became a Holocaust revisionist and antisemite. He is not only denounced by anti-fascists like Hope not Hate but also by anti-Zionists such as As’ad AbuKhalil, Michael Rosen and Tony Greenstein.

Williamson's apology to me reveals he is either more stupid or more dishonest than we already realised but either way confirming he doesn't care at all about racism against Jews. Because either he saw a petition complaining about someone being accused of antisemitism and just assumed the accusation was false without bothering to research it (in which case he is remarkably stupid and irresponsible, as well as automatically assumes accusations of antisemitism are always false) or he's lying.

And Williamson has a track record:
I haven't really looked to see if anyone is siding with Williamson, but there are some:

Zionist fanatics have been calling for his head for ages, so spare me the cant about Gilad Atzmon
— Asa Winstanley (@AsaWinstanley) December 21, 2018

Miko “Holocaust: yes or no?” Peled chimes in for Williamson. It’s the endorsement no-one was waiting for pic.twitter.com/addhf67SPv
— Victoria Freeman (@make_trouble) December 21, 2018

So far, Skwawkbox has retweeted Williamson's apology, but none of the other hyperpartisan Corbynite accounts have, and many influential figures on the party left (e.g. Mike Segalov, Dawn Foster) have sensibly criticised him, so maybe this spells the beginning of the end for Williamson. But somehow I doubt it.

I should also say that I find it irritating that he was never forced to apologise for his accolade for Vanessa Beeley, a cheer-leader for Assad's reign of terror in Syria (as well as another Atzmon fan), or that Williamson's support for Maduro's increasingly authoritarian regime in Venezuela doesn't attract more criticism. (For more on Williamson's terrible politics on Latin America, see Paul Canning's tweets, e.g. this thread. For more on how Williamson has promoted Kremlin-backed fake news on Syrian chemical attacks, see Victoria Freeman on Twitter.) Antisemitism has a corrosive influence on part of the Corbyn left, but the "anti-imperialist" blindness to suffering in Syria, Venezuela and elsewhere has a corrosive influence too and should make people just as angry.


Also read:
On Williamson: Stephen Bush on what Williamson still having the whip says about a future Corbyn government; and Oz Katerji on Labour's choice between being Jo Cox's party or Chris Williamson's.
On Atzmon: Dave Rich on whether Gilad Atzmon is a fascist; Keith Kahn-Harris on Atzmon's pretentious antisemitism; David Hirsh on why Atzmon should not be promoted by the left (from 2006).

Previously:
Why Chris Williamson makes me angry; Eight reasons not to let George Galloway back in the Labour Party.

All my Atzmon posts. All my Labour antisemitism posts.
Email Post
Labels: Antisemitism and the Labour Party AtzmonWatch