As usual, I am posting here my most-read posts of the year. 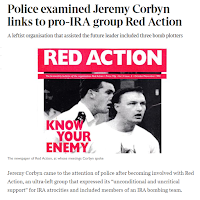 
This post examined a claim made by Andrew Gilligan in the Sunday Times about Jeremy Corbyn's involvement with 1980s/90s radical group Red Action, finding most of them to be basically false.

Having looked at this fairly thoroughly now, whatever grains of truth in Gilligan's account are heavily diluted by half-truths and falsehoods. I am not making this point to defend Corbyn, but to defend truth. If Corbyn is to be indicted, let it be for things he actually did. 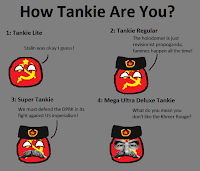 2. The return of Stalinism on the British left? (May)

After the proliferation of Stalinist banners on the annual TUC Mayday parade, and the election of a Stalinist as education officer of my local Momentum branch, this post looked at how Stalinism has returned to the British left.

In March, the Southern Poverty Law Centre published a report by Alex Reid Ross (the author of the book Against the Fascist Creep)  on left-right convergence. The SPLC took it down after legal bullying by Max Blumenthal, so I went through what the report said about Blumenthal and found it to be accurate. Here's part 2.

4. In the time of the multipolar spin (April)

Not a particularly special post, but a round-up of recent writing on the fascist international, left-right convergence, disinformation and conspiracy. The title is taken from Reid Ross's SPLC report.

5. Against the fascist creep, against left nationalism (December)

This post looked first at the convergence between the extreme far right and the conservative mainstream, embodied by the relationship between Tommy Robinson and Gerard Batten, then goes on to look at anti-fascist responses to this moment, including the dreadful response of the SWP's front organisations (Stand Up To Racism/Unite Against Fascism) as well as some (Novara-linked) parts of the Momentum left. Finally, it looks at how that dreadful response is shaped by a rising form of left nationalism, as diagnosed by Malcolm James and Sivamohan Valluvan.

A slightly miscellaneous post on some things that were making me angry that month.

7. How a suicide attack on a civilian convoy was spun into a sectarian conspiracy (February)

This was a guest post by Anton Mukhamedov that I was privileged to publish, a very well-researched investigation of an explosion in the al-Rashideen neighbourhood of Western Aleppo on April 15, 2017, when buses evacuating civilians from the towns of Fu’ah and Kafriya besieged by rebels in Idlib province were targeted. It looks at how sectarianisation and then disinformation spun the story into a conspiracy theory.

A late entry, looking at the odious antisemite Gilad Atzmon, and how shameful it is for a Labour MP to be defending him.

Nothing special about this post, but it was the first of a series of almost weekly round-up of key reads, plus included my top five posts of 2017.

This post looked at how a section of the "anti-war" left has increasingly taken up Islamophobic, war on terror themes, using Ben Norton and Max Blumenthal's Grayzone Project as a case study.

This post didn't make the top ten in terms of clicks, but it is one of the things I've written this year I'd most like you to read. It is about the far right DFLA and the mobilisations against it, and the two souls of anti-fascism (in Dave Renton's phrase) demonstrated in those mobilisations.

And here's my top tweets of the year:
Thread by @bobfrombrockley: "It's that time of the year when I make a thread of my top tweets from the last year. So, here we go, my 2018: JANUARY: […]"
Email Post
Labels: Left-right convergence vanity press