In this post, I set out what I think are the four things we vitally need to do on Thursday. The problem is, not all of the tasks are compatible with each other...

1. DON'T GIVE THE HARD RIGHT BREXIT PARTY A VICTORY

Nigel Farage's Brexit Party (despite having no policies, dodgy funding, despite its misogynistic, racist, fascist and antisemitic smell, its totally astro-turfed party structure, and having an IRA-supporting candidate in the constituency where the Warrington bombing took place, etc) is currently on track to get the biggest vote in the Euro elections with upwards of 30% - and up to 37% - in opinion polls.

If the Brexit Party realises that 30-37% in the actual election, this will be disastrous. It will be interpreted as a mandate for hard Brexit (including by Conservative and Labour party politicians, pulling both parties to tack to the nationalist right). It will give the BBC and other mainstream platforms a reason to keep on inviting Farage onto our airwaves as some kind of legitimate voice. It will add weight to the coalition of authoritarian populist, pro-Putin hard right forces in the European Parliament. And it will mean that some dreadful people (including homophobic and reactionary ex-Tory Anne Widdecombe, Claire Fox and other ex-RCP activists, alt-right activist, Bullingdon Club boy and hedge fund heir George Farmer, and vulture capitalist Richard Tice) will be paid by the taxpayer to represent us in that Parliament.

However, Farage's strategy relies on the low turnout in European elections. As Alex Andreou points out, "He has never prevailed in any electoral contest with a turnout of over 40 per cent. He has a ceiling."

In other words, more than anything else, we need to get out the vote. The more people vote for Labour, Lib Dems, SNP, Plaid, Greens, Change UK or even the Tories reduces Farage's share of the vote and reduces his MEP numbers. Because of the more proportionate nature of European elections, every vote counts. Make sure everyone you know knows that, however unimpressive they find the options, not voting is not an option.

Our second priority has to be to make sure the biggest vote share goes to anti-Brexit parties. Pundits, but also crucially May and Corbyn, the leaders of the two main parliamentary parties, will be interpreting the results as No Deal Brexit v Deal Brexit v No Brexit. As Jonathan Freedland notes, the main parties interpreted the pro-Remain results of the local elections by hailing them as a heartfelt plea from the voters to get on with Brexit. This he, continues, "is a warning to remain-minded voters ahead of Thursday’s European elections. If you want to send a message about Brexit, you’ll need to send it as clearly and as unambiguously as possible. Up against a spin machine capable of hearing a repudiation as an endorsement, voters will need to be louder and clearer this time, closing down the scope for wilful misinterpretation."

The mantra of "respect the Referendum", "get on with Brexit", "Brexit sort it", and "replace free movement with a great deal of movement", as well as the prevarication over the Withdrawal Bill, has signaled clearly that, from the perspective of the Westminster bubble and Corbyn HQ, a vote for Labour is a vote for Brexit. Given that our relationship with the EU is the most important issue in this election, a vote for Labour is therefore not a tenable option. And this is why on Thursday I am joining the 60% of 2017 Labour voters who will not be voting for Corbyn's party. 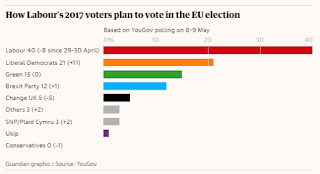 The Remain parties have been frustratingly fragmented in the elections. Change UK have been flawed and profoundly un-impressive. I personally couldn't stomach voting for the austerity-enabling Lib Dems. So for me a Remain vote, in England at least, means a Green vote.

However, balance of forces in regional constituencies should be a strong consideration here. You should check out the Democratic Audit website, and look at your area. For example, in London Change UK are polling just 7% and so a vote for them is probably a wasted vote, while a strong Green vote could lead to two Green MEPs instead of one. Similarly, in the Sothwest  and the West Midlands, the Greens are polling third and have a good chance of a seat in each. In Wales, in contrast, the Greens are too far behind to have much chance of winning one of the four seats, and I'd probably vote Plaid.

One tragic thing about the Labour leadership's disastrous Leave strategy is that Labour MEPs are mostly very good. Richard Corbett, Julie Ward, Jude Kirton-Darling and Seb Dance, for example, have been strong proponents of the serious Remain and Reform stance that Labour should be taking in Westminster, and I would really love to see Laura Parker and Eloise Todd joining them in the European Parliament. Based on the quality of the candidates alone, a vote for Labour would be a no-brainer. Sadly, though, Priority no.2 trumps this for me.

Most UK voters don't realise that these elections have the consequence of determining the President of the European Commission (in the way that Westminster elections for MPs determine the Prime Minister too). The President (currently Juncker) has an important role, both in shaping how the EU relates to the UK in withdrawal negotiations, but also in whether Europe stands up to the threats posed by Putin and Trump, how firm a line it takes with authoritarian member states like Orban's Hungary, its capacity to reform, and the policies it takes on vital issues such as migration and the environment.

The front runner (on a reduced majority) is the EPP's Manfred Weber, and a vote for Change UK is a vote for Weber. Weber represents the status quo, relatively harsh on immigrants, soft on Orban, and promoting privatisation. The main rival is the far more preferable Frans Timmermans of the Socialists & Democrats, and vote for Labour ir a vote for Timmermans. A vote for the Lib Dems is a vote for ALDE's Guy Verhofstadt, one of the few candidates with any recognition in the UK. The Tories sit with the hard right ECR, along with assorted populists and conservatives, who are luckily set to crash from third to fifth. The bad news is that Matteo Salvini's new hard right EAPN is likely to overtake them to become the fourth party.

The Greens (who sit in the same block as the SNP and Plaid Cymru) have no hope of their candidate,  Bas Eickhout, being the President, but a strong Green presence in parliament is key, in a time when the centre-left is collapsing, to an alliance in parliament behind decent policies.

The results of these elections, at both a European level and a UK level are likely to be grim - but by maximising the vote we can reduce the grimness slightly.
Email Post
Labels: RCPWatch UK politricks UKIP

I understand your sentiments in preferring to vote Green rather than Liberal, but think you are wrong. This vote is a proxy for a second referendum. The necessity, therefore, is to maximise the vote for clear anti-Brexit parties, and to get the largest number of MEP's from such parties elected.

Unfortunately, in England that means voting Liberal, and In Scotland SNP, and Plaid in Wales. All of the latest polls show that the Liberals are ahead of the Greens. Although the Greens are talking about these elections being by PR, really they are not. A vote for Greens, rather than Liberals, could see Labour or Brexit candidates being elected, where otherwise they would not have been. Its important to concentrate the vote for the Liberals in England.

The truth is that it is this vote against Brexit that is the priority in this election. Otherwise I'd vote Labour. There is no real difference between Liberals or Greens. In fact, Greens where they have been elected have been worse that Liberals, and their underlying anti-growth ideology is actually reactionary, however much they dress up their politics with radical verbiage.