Levon Helm, one of my favourite musicians, has died. My padrino gave me the wonderful triple album of The Band's Last Waltz when I was in my mid-teens, and it totally transformed the way I listened to and understood music. I don't think there are many albums I listened to more than that one. 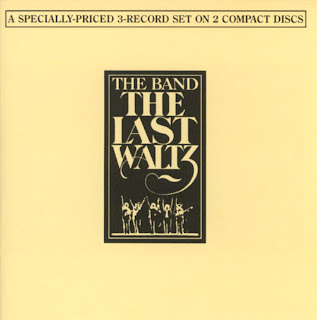 I realise I played a track from there here before - "Down South in New Orleans", to mark the passing in 2010 of Bobby Charles, who sings on that along with Dr John. Dr John contributes one of the highlights of the album, "Such A Night", and also plays congas on some of the later tracks. My favourite bits are where it slows right down for Neil Young's "Helpless", Joni Mitchell's "Coyote", Neil Diamond's "Dry Your Eyes" and Emmylou Harris' "Evangaline". (Two of them are Canadians, and one is a Southerner singing a song about the Cajun diaspora.)

"Dry Your Eyes" is, I think, partly about the death of the 1960s dream, and the whole concert, recorded in the Autumn of 1976, was literally The Band's last concert (until partially re-forming years later), and it has a real elegiac quality, the sense of something passing.

Levon Helm played drums and mandolin, and sings some of the songs. I never realised he had a low opinion of the concert, but more really of the Martin Scorsese film of it, which I've never actually seen.

Levon Helm was born in Arkansas, grew up in a town called Turkey Scratch, and was apparently inspired to music by the mandolin god Bill Monroe who he saw at age six. (Here's Monroe that year: you can hear the connection.)

I think "Jemima Surrender" is the only major Band song he wrote, but he sang the most well-loved ones, including "The Weight" and "The Night They Drove Ol' Dixie Down". Here's a couple of his tracks, the second from his brilliant last album Electric Dirt.

Read a lovely tribute at Nine Bullets, listen to The Band live in 1984 with Van Morrison, and in New Orleans in 1994.