Recently the Online Hate Prevention Institute (OHPI), which is based in Australia, published an interesting report on anti-Muslim bigotry within social media – you can download it here.  The author, Andre Oboler, has also published on antisemitism.  He and I have rather different perspectives on free speech issues – I'm wary of bans and censorship, whereas he’d like to see some tightening up of the law on hate speech.  I do not agree with the recommendation he makes on p. 7 of his report:

The Australian Government should pass laws to make vilification on the grounds of religious belief or practise unlawful and expand the remit of the Australian Human Rights Commission accordingly.

Criticism of anti-Muslim discourse is associated in many people’s minds with a threat to freedom of speech.  This is not unreasonable, given the murderous attacks on some critics and satirists of Islam, and the existence of illiberal and repressive blasphemy laws which have had a particularly chilling impact on dissident Muslim voices. So I’ll begin my stating that I certainly don’t want to ban any of the examples I refer to in this post, just to explore whether they are bigoted or whether they are making legitimate, even important, points.

A number of posters and cartoons were reproduced in the report.  People concerned about free speech (rightly) assert that satirical criticism of Islam, or aspects of Islam, need not be bigoted.  But some of the material highlighted by Andre Oboler helps demonstrates that this can be a difficult border to police.  On page 14 of the report you can see a poster with the text:

The cult of Islam has no intention of fitting in.  Muslims will never become part of a civilised society.

Another example (p. 18) is a poster depicting a nuclear fireball and the caption:

Some cancers need to be treated with radiation: Islam is one of them.

It would be possible to argue that the second poster only criticizes an idea – that it targets Islam, not Muslims. But there’s an uncomfortable slippage here between the literal and the metaphorical, particularly if you have come across calls to bomb Mecca.

A very straightforward example of dehumanizing anti-Muslim rhetoric can be found on p.17 where a plane, labeled ‘humans’, is carrying a crate labeled ‘Muslims’.  There are valid reasons to avoid the term ‘Islamophobia’ – but surely any reasonable person would agree that cartoon is bigoted.

Although it would be absurd to require that every satire on something Islamic comes accompanied by the kind of ultra cautious remarks which preface this clip, a climate of anti-Muslim bigotry may make people look more closely at the context/provenance of Muslim-themed satire.  I think that’s why there has been some slightly anxious speculation as to whether Twitter’s favourite parody Sheikh, King of Dawah, is at least culturally Muslim.

Content as well as context, of course, also helps one determine whether bigotry lies behind satire.  Depicting the victim or antagonist of Muslim extremists as a Muslim 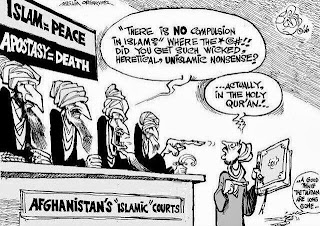 creates a completely different effect from images which project a ‘Clash of Civilisations’ subtext, as in cartoon B26 of OHPI’s report (p.70), a blonde woman kicking a Muslim pig off the map of Europe. But a complication may arise for the viewer deciding how to respond to images featuring Muslim women. 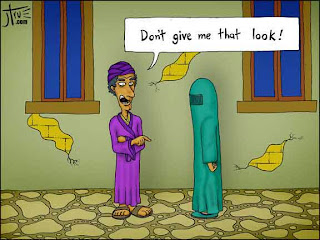 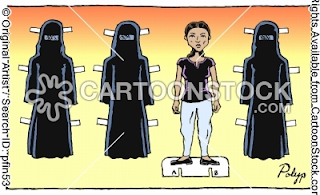 I believe I came across both these images on rather dubious sites. But many Muslim and ex-Muslim women (and their male and non-Muslim allies) bitterly resent those who insist that this kind of dress is desirable, even mandatory, for women.  Whereas this ‘joke’ about binbags seems dehumanizing  I’d hesitate to criticise the paper doll image, which presents the woman in a non-stereotyped way, and could certainly be seen as a legitimate satire on theocratic dress codes.

The same uncertain borderline between legitimate criticism and racist bigotry is a problem within discussions of antisemitism.  Recent examples by Steve Bell and Gerald Scarfe have generated much debate. Latuff is often accused (quite rightly in my opinion) of allowing criticism of Israel to be tainted by antisemitism – the use of Nazi imagery is a common problem in his work. But here is an example which, for a change, doesn’t seem too problematic.

Returning to Islam – a recent example of censorship caused widespread indignation.  This was when atheist students were forced to cover up T shirts bearing this image. I’m a great fan of Jesus and Mo, and I supported those students.  But perhaps taken out of context that particular cartoon could make people think it was a reflection of bigotry against Muslims, not just satire against religion.  There is a reference to burning things – that could be seen as a comment on (Muslim) over-reaction to ‘offensive’ material, rather than, as is more clearly the case with this earlier Jesus and Mo, a satirical observation on religion.

Both the EUMC WD and the Tell MAMA definition emphasise the importance of context, and Tell MAMA specifically identifies an individual’s track record as a factor which should be taken into consideration when making a judgement.  When looking up cartoons about Islam, I found much that was aggressive and unfunny. But Jesus and Mo is neither, and, taking that wider context into full account, the T shirt that was banned from the LSE strikes me, not as incitement to hatred or bigotry, but as a legitimate comment on attempts to silence satire – softened by the resonances of the Jesus and Mo ‘brand’ which is so different from the images you will find on some counterjihad sites. See for example image D20 on page 89.  And shouldn’t one be able to use satire to show contempt for those who want to curtail freedoms with violence, whether or not they act in the name of Islam?  As I mentioned at the beginning of the post, it’s Muslims who bear the brunt of blasphemy taboos.

Of course Jesus and Mo isn’t in the report.  But B24 (p. 69) is – should it be? It depicts a Muslim wearing a metaphorical suicide belt of ‘multiculturalism’ while anxious onlookers tiptoe around his supposed sensitivities. Andre Oboler offers no analysis of this.  I can understand why an image of a rather sinister looking Muslim deceiving non-Muslims might cause concern.  But, again, the underlying message of the cartoon is not something anyone who, for example, opposed Ken Livingstone’s embrace of Qaradawi, or is pleased Hope not Hate is tackling Muslim extremists as well as the traditional far right, can easily distance themselves from.

People seem to have a very hard time understanding the qualification you make at the beginning: that saying you find something offensive or racist does not mean you want it banned. We need to keep ramming this point home: that defending free speech does not mean saying the message is acceptable, and conversely that criticising racism does not mean stopping free expression.

Probably my only difference of emphasis from you would be to put less stress on the authorship of these sorts of images in thinking about "context", and putting more stress on the continuities with pre-existing discourse and on effects. In terms of authorship, this is especially true in our viral age, when a cartoon or other image so rapidly moves out of the context of its production into other contexts: a non-antisemitic anti-Israel cartoon by Latuff might be innocently retweeted by a non-racist Israel-critic, and that'd be fine; conversely, a completely non-offensive cartoon about Israel or Islam reproduced by a fascist site among a bunch of offensive ones can become not so fine.

In terms of discourse, I think the issue with the Scarfe cartoon, for example (which I thought was not offensive), was that it was taken by some to play with blood libel imagery. In the case of Islam, certain images are part of a repertoire of anti-Muslim racism, and playing with them in a non-racist way might risk perpetuating these images (I can't think of a good example of that).

And in terms of effect, I think that the hurt caused by an image, regardless of its intent, does matter, even if it is not sufficient in making a judgement. What's interesting about the LSE Jesus & Mo ban is that noone seems to have actually complained; the university _assumed_ people would be offended.
11 December, 2013 09:47

Sarah AB said…
Thanks Bob. Yes, I agree that Muslim-related satirical images, whoever created them and for whatever reason, can get co-opted by the far right. Muslim women are a target of concern for - Muslim women - and for the far right (who exploit them for their own ends)- and for various shades of grey in between.

But although images can and do become 'contaminated' by the company they keep I think it's important that the far right (and anxious liberals) don't make it impossible for dissenting Muslims/anti-racist secularists to make use of sharp satire.

I also thought that the Scarfe cartoon was ok - but for me that was a matter of first seeing a very strong prima facie case against it which was softened by learning/thinking more about context - authorship and intention.
11 December, 2013 19:07

SarahABUK said…
I've been thinking more about cartoon B24. I originally expressed doubt as to whether it should have been included. I wasn't sure about this one, as I thought it had a legitimate target, multiculturalism as political process as opposed to 'melting-post' multiculturalism.

But it assumes that multiculturalism is a problem caused by Muslims and experienced by non-Muslims when that is in fact a false divide. Some non-Muslims are responsible for the worst effects of (versions of) multiculturalism and many Muslims suffer because it is assumed they don't value the same human rights non Muslims do.