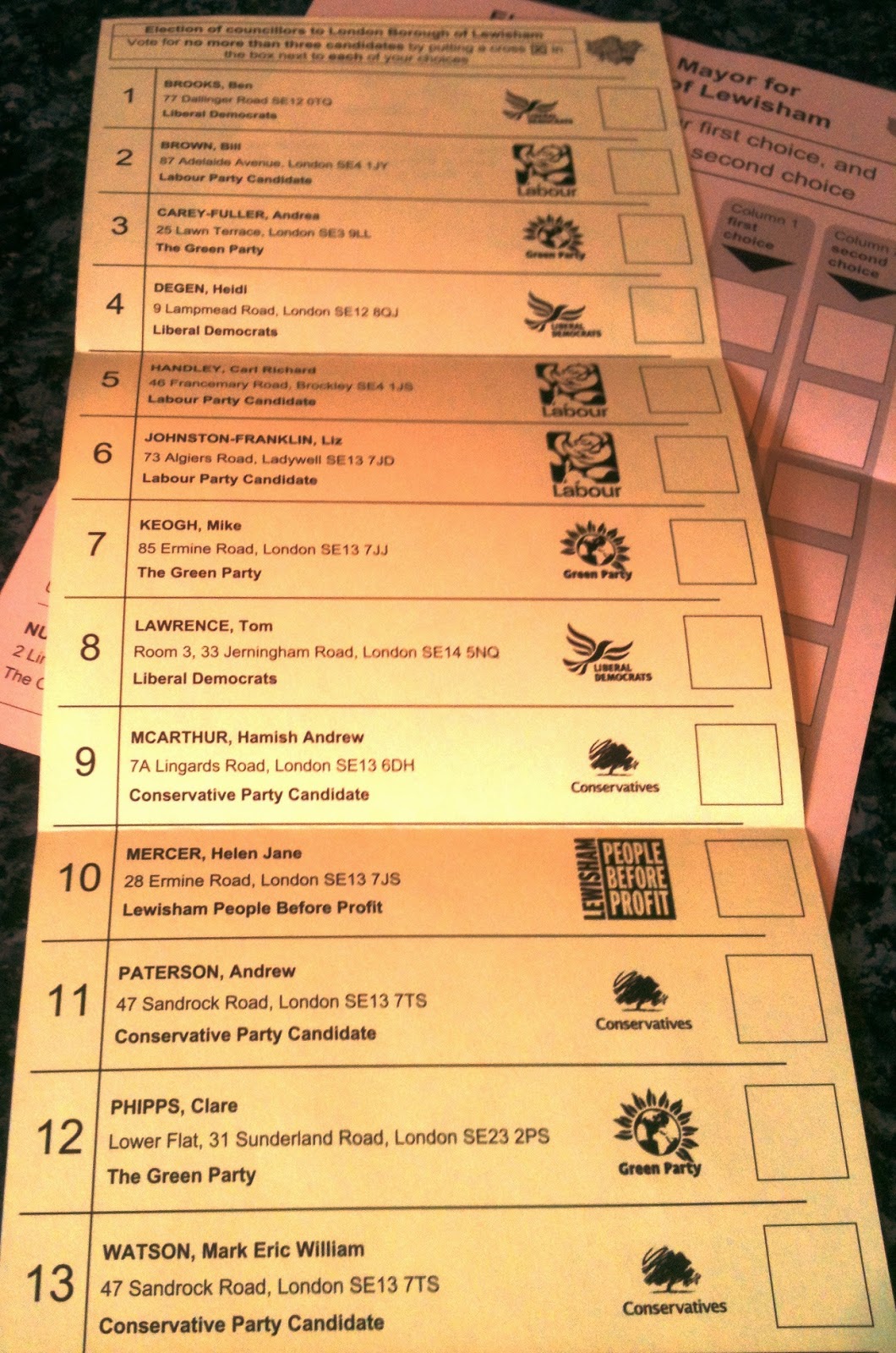 Here are some last minute comments on a few Lewisham council wards (the "yellow" ballot paper), my last election post. (Check the previous posts on the mayorals and the Euros.)

Brockley
This is probably one of the better hopes for the Green Party, although, as Clare notes, the loss of their "star" Darren Johnson will not help them. The People Before Profit candidate Toby Abse is very decent politically (Candidates here.)

Crofton Park
In the last elections, with a high turnout, the Lib Dems took one seat from Labour, so I would recommend an all-Labour vote. (Check out Crofton Park Labour's website.) The Greens did respectably, but not enough to break through, so a Green vote risks letting a Lib Dem in. (Candidates here.)

Forest Hill
This is another ward that has a Lib Dem councillor, who polled very high in 2010, and so I'd recommend an all-Labour vote. Here's the Forest Hill Labour Party site.

This is a target ward for People Before Profit, who came second there in a March 2013 by-election. In my opinion, Evelyn has been really badly served by its Labour councillors, although I like the look of new candidate Jamie Milne. If you want a left alternative, my strong recommendation would be Jessica Leech, standing for TUSC. She's a local resident of great integrity and determination, who has been involved in several community campaigns, including defending council housing.  (Candidates here.)

Telegraph Hill
In the last election, the Socialist Party (standing under the TUSC label) did well, with around a thousand votes each, which would be enough to win in normal elections. However, the high turnout and Labour surge put them in second place, though still far ahead of the Greens and Lib Dems. This time, though, the left vote will be split, with PB4P's leader John Hamilton standing, so I don't know if TUSC can make it. (Candidates here.)

New Cross
This will be an interesting race, with a very strong and popular Labour team, but also a Green candidate active in the  New Cross forum and three high-profile People Before Profit candidates. In the last election, the Greens got a very low vote and People Before Profit came third, behind the Lib Dems. To win, PB4P would have to more than quadruple their vote, which seems unlikely. (Candidates here.)

Ladywell
The People Before Profit candidate in Ladywell is Helen Mercer, who I believe has been very involved in the Lewisham Hospital campaign. She came fourth in the by-election of 2010, with 233 votes, so is unlikely to be elected. Labour won the ward, but with a majority of less than 200 over the Greens, so this is another key target for the Greens. Mike Keogh, who represented the ward 2006-10, is the most likely of the Greens to break through in Ladywell. There are also strong Labour candidates, including Bill Brown. (Candidates here.)

Downham
Downham has the distinction, once again, of being the only ward in Lewisham with a fascist candidate, Tess Culnane, standing this time as an independent. According to Hope Not Hate:


Veteran fascist and former “Nit-Nurse” Culnane has jumped backwards and forwards between the BNP and NF over a number of years. Served as an aide to Richard Barnbrook, the BNP’s one time Greater London Assembly member, where she was dubbed a “Nazi Granny” by the media.