The European parliamentary elections in London 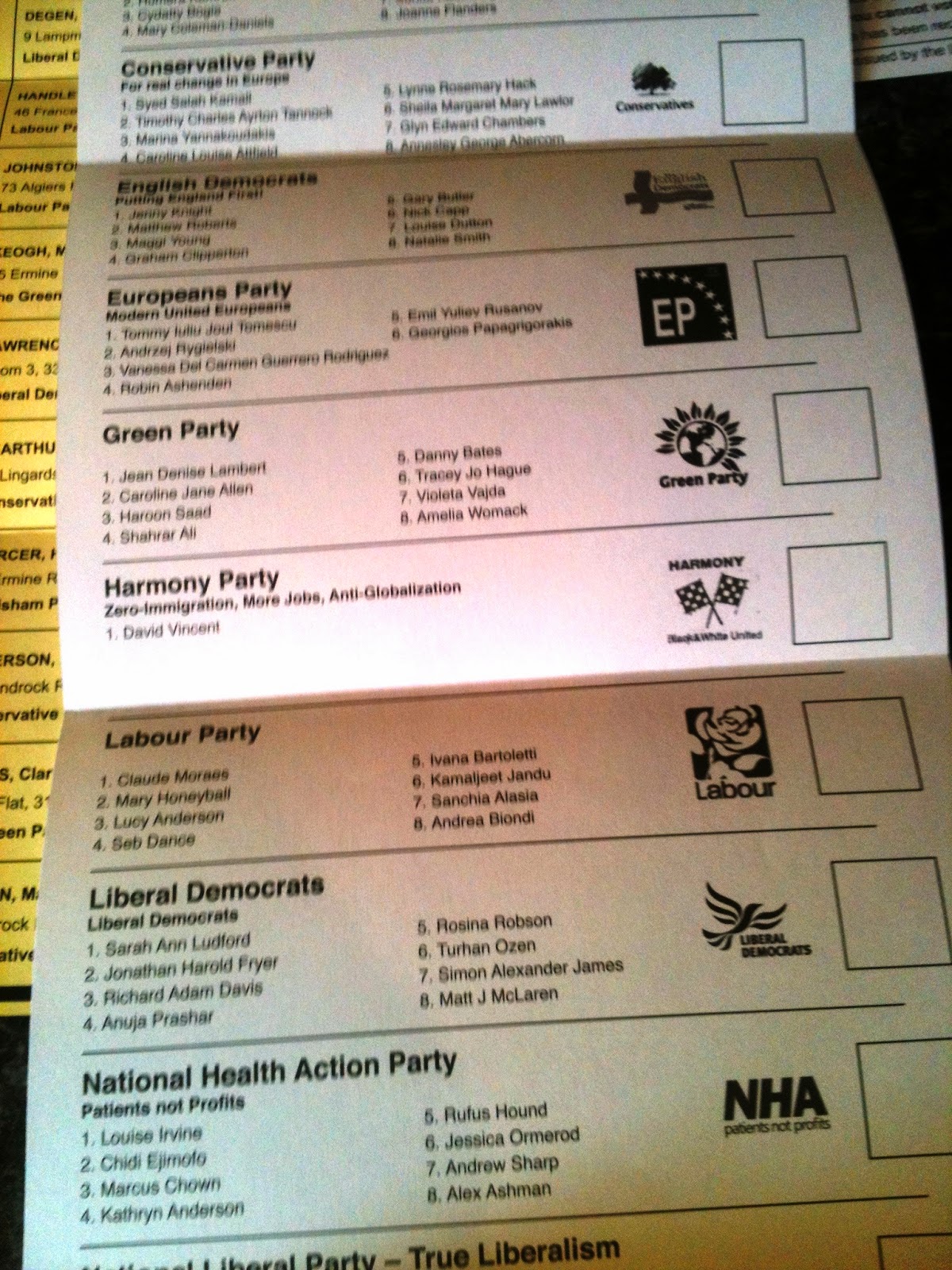 This is the very long white ballot for the European elections. London has eight MEPs selected by party by proportion of the vote, so any party getting about 12% of the vote gets an MEP. So, these are the things to bear in mind:

Greens: The Green Party got just over 10% of the vote last time, and one MEP, the quite impressive and sensible Jean Lambert. I voted Green, because I want to keep her.

UKIP: UKIP placed just behind the Greens in 2009, getting one MEP. With the "Boris bagel" of outer London part of their heartland, they are likely to increase their percentage. If they can double it, they will get two MEPs, which will give them even more media exposure and more EU funding (and more EU funding to whatever far right alliance they join in the European parliament). This is why it is imperative that the sensible vote is as strong as possible, and a very good reason to vote tomorrow.

The far right: The BNP got nearly 5% of the vote in 2009 and have pretty much imploded since then, so has no chance of an MEP, though we shouldn't be complacent. There are a whole welter of other far right parties standing this year, some not obviously far right: the National Liberal Party, which, despite its name and standing with a bunch of non-white candidates, is actually a fascist party. The English Democrats are not strictly a fascist party, but are full of fascists.

Left alternatives: Sadly, I think it's fair to say there are no real left alternatives. The vaguely left party is the Little England No2EU, supported by the Stalinist Morning Star and the late Bob Crow, who I wouldn't dream of voting for. (See Phil's nice account here.) And then there is the National Health Action party, which has a strong support base in Lewisham, where its activists have been heavily involved in the Save Lewisham Hospital campaign. I don't see the point of them standing in the European elections, given that the EU has no power to save the NHS, so their candidacy should be seen as a propaganda opportunity on the threats to our health system and as a warning to Labour to stand firm on the NHS.

kellie said…
I’m sure Jean Lambert is better than some, but this statement on her site about Syria was delusional:

The EU Parliament resolution she refers to is here:

The notion that this worthy expression of the Parliament’s opinion shows the EU as “a genuine force for peace in the world” is ridiculous.
22 May, 2014 13:22

Dave Levy said…
In two blog articles, I wrote about the Euro elections, in one, I write about the politics and policy and in another the realpolitik.

While you may understandably feel that Labour's Euro campaign fails to talk about European issues in a concrete way and fails to challenge both the racism of the right and austerity economics, you should look at Labour's candidates. The slate is led by Claude Moraes, a consistent anti-racist and civil libertarian, and now one of Europe's leading digital liberty campaigners, Mary Honeyball, is a leading equality campaigner and Lucy Anderson brings an expertise and committment to the defending the social chapter. I think it's a good list and shall be voting for them shortly.

In real politik terms, it would seem you have a choice between a third Labour MEP, (Lucy Anderson) and the Greens and LibDems. The anti-LibDem vote, which seems to be part of your motivation as expressed elsewhere is probably to vote Green.
22 May, 2014 16:16