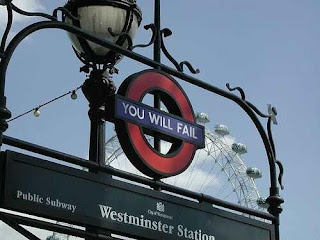 As a London resident, I took the 7/7 attacks personally.

I had moved to London in 1991, during a period of intense IRA bomb attacks on London. Later in the 1990s, as the Irish Troubles moved towards their uneasy Good Friday resolution and the bombing slowed, I watched London relax, loosen its tension.

On 7 July 2005, four bombs heading to the four compass points from the transport nexus of Kings Cross, which so many Londoners pass through each day, destroyed that. The attacks were attacks on Britain as a liberal democracy, but also on London as a messy, mongrel, cosmopolitan city.

The responses to the bombing, and especially extraordinary acts of quiet heroism from ordinary people, showed us the best of London.

The mayor, Ken Livingstone, by video link from Singapore, where he was fronting our 2012 Olympic bid, gave a speech which captured so well what most Londoners felt. Early in the speech, he said this:

This was not a terrorist attack against the mighty and the powerful. It was not aimed at Presidents or Prime Ministers. It was aimed at ordinary, working-class Londoners, black and white, Muslim and Christian, Hindu and Jew, young and old. It was an indiscriminate attempt to slaughter, irrespective of any considerations for age, for class, for religion, or whatever...


Finally, I wish to speak directly to those who came to London today to take life.
I know that you personally do not fear giving up your own life in order to take others - that is why you are so dangerous. But I know you fear that you may fail in your long-term objective to destroy our free society and I can show you why you will fail.

In the days that follow look at our airports, look at our sea ports and look at our railway stations and, even after your cowardly attack, you will see that people from the rest of Britain, people from around the world will arrive in London to become Londoners and to fulfil their dreams and achieve their potential.

They choose to come to London, as so many have come before because they come to be free, they come to live the life they choose, they come to be able to be themselves. They flee you because you tell them how they should live. They don't want that and nothing you do, however many of us you kill, will stop that flight to our city where freedom is strong and where people can live in harmony with one another. Whatever you do, however many you kill, you will fail.

7/7 helped change my attitude to the security arm of the state. As a libertarian, I had been antagonistic to all forms of policing and surveillance. I remain suspicious, but knowing how little stands between me (and my family) and terrorist attacks has led me to feel that civil liberties might not always be as important as I thought.

In the days after the attacks, we saw the incompetence and casual racism that led to the killing by police of Jean Charles de Menezes, one of those people who came to London to be themselves. And we saw a liberal community that seemed to care more about his single death than the 52 killed by the terrorists.

We saw even the Sun newspaper acknowledging the multicultural, multi-faith reality of the victims, with the face of Shahara Islam being one of the iconic symbols of the awful attack. And we saw bigots calling for and carrying out revenge attacks on ordinary Muslims, or on people they thought might be Muslims.

I had only recently started blogging, and the politics of these contradiction helped define the project of this blog. The religiously rooted fascist, anti-human, anti-democratic, anti-urban and anti-multicultural ideology behind the 7/7 attacks needs to be fought literally, but it also needs to be fought politically.

And sometimes the hardest and most important political struggle is not with the jihadi fascists themselves, but with the varieties of leftist, liberal and "realist" thought which explain away, apologise for, negotatiate with or accommodate to terrorist ideology.

We need a politics that defends what the terrorists sought to destroy, that celebrates our profane freedoms. A politics that brings communities together around our common stake in the future and our children's future. A politics that neither rushes to blame the other, nor attempts to explain away evil through moral relativism or vulgar materialism. A politics that sees the moral outrage in terrorism, but also understands the need to analyse the context in which terror thrives. A politics that takes seriously the open question of how much freedom can we let go of in order to defend freedom. In short, a difficult politics.

Further reading: My first anniversary blogpost, including links to all of my early 7/7 posts.
Email Post
Labels: 7/7 War on terror