What does the Iran deal mean for Syria?
Many liberal and mainstream voices are talking up the "historic" Vienna deal allowing Iran to continue its nuclear proliferation as some kind of "triumph of diplomacy", simply because the two sides actually reached an agreement.

The deal has been welcomed by Bashar al-Assad and greeted with dismay by the Syrian opposition and rebels. The economic benefit to Iran, and relaxation of control on its arms trade, will boost Russia and China's weapons (and fuel) sales to Iran and its proxies. This can only benefit Tehran's Damascus partner, who will reap that benefit in increased firepower and increased finance - which will be felt by the Syrian civilians on whom Assad's bombs fall day by day. Aron Lund spells it out here, and Hassan Hassan here.

This is quite a post by the Syrian in exile blogger "Maysaloon", on the "progressive"/Pan-Arabist betrayal of humanity in supporting the Iran deal. Here is the final paragraph:


I'm sorry that Syrians are inconvenient, that we're not being killed by the right type of enemy for you people. I'm sorry we haven't received your stamp of approval. Pan-Arabists are cheering a deal with Iran, because, as they keep reminding us, Israel is the real enemy; Palestine the real goal. Never mind the untold misery, guts and excrement that we are being forced to crawl through in the name of this mythical liberation that hovers on our horizon like a promised paradise for the wretched of the world. Syria is "complicated". Syrians are only to be felt "sorry for", like the victims of some flood or an earthquake. From your glass towers in Dubai you intellectual pan-Arabists can toast a deal with Iran, and celebrate the fact that nothing has been allowed to deviate your attention from the lofty goal of "liberating Palestine".

Are Kurds ethnically cleansing non-Kurds in Rojava?
Relating to my recent post on Patrick Cockburn's lies, here a Kurdish writer refutes the concerted media smear (originating from Turkish and Gulf spin doctors) that Kurdish forces in Syria are "ethnically cleansing" Sunni Arabs. I have seen several vague allegations (similar to Cockburn's) about the Kurdish YPJ/YPG militias under the political control of the PYD party mistreating non-Kurds - but I have seen not one single credible article detailing actual instances of these. And there are credible accounts of non-Kurds afraid of the Kurds - but no stories showing that this fear is grounded in experience rather than in rumours spread via partisan media sources.

The Syrian Network for Human Rights, the best source of casualty statistics, recorded a total of 67 civilians killed by the PYD's forces in the first half of 2015 - 67 too many, but less than killed in Coalition air strikes, a twentieth of the number killed by IS and al-Nusra, a tenth of the number killed by Syrian rebel groups. There is no record that any of these 67 were acts of deliberate ethnic cleansing rather than collateral deaths in war zones. (To get a sense of the scale of the war zone: PYD forces are engaged on a frontline of about 300 miles; the Maginot Line in WWII was 200 miles long.) In short, it is probably a myth that Syrian Kurds are committing ethnic cleansing.

Does ISIS really control a half of Syria?
From October, lots of Western media sources started claiming ISIS control a third of Syria's land. In May, when Palmyra fell, the Guardian, Fox and others said it controlled more than 50% of the country, based on claims from the Syrian Observatory for Human Rights. But is this true?

Patrick Cockburn, whose account always leans towards the Damascus government's slant, notes that "these proportions are a little deceptive because the government still holds most of Damascus, the main cities and the roads linking them". The further caveat, though, is that the areas allegedly controlled by ISIS to make up that 50% include very sparsely populated areas,  where there is actually no ISIS presence at all.

As was clear from maps of its advance in 2014, ISIS's m.o. is that of what Deleuze and Guattari called the "nomadic war machine": moving in flows along routes such as roads and oil pipelines without attempting to occupy the empty spaces in between,


moving away from the center, creating a new center, departing and returning, ebbing and flowing in relation to no one central point... consuming flesh, and committing violence [along the way].

The Caliphate is a "state" which ignores conventional state borders. It operates up-close and not at a distance.

Thus more accurate maps of the Syria battleground - such as those produced by the Institute for the Study of War - do not shade in the un-occupied zones behind the IS lines. This ISW map shows recent changes in the Syrian theatre: 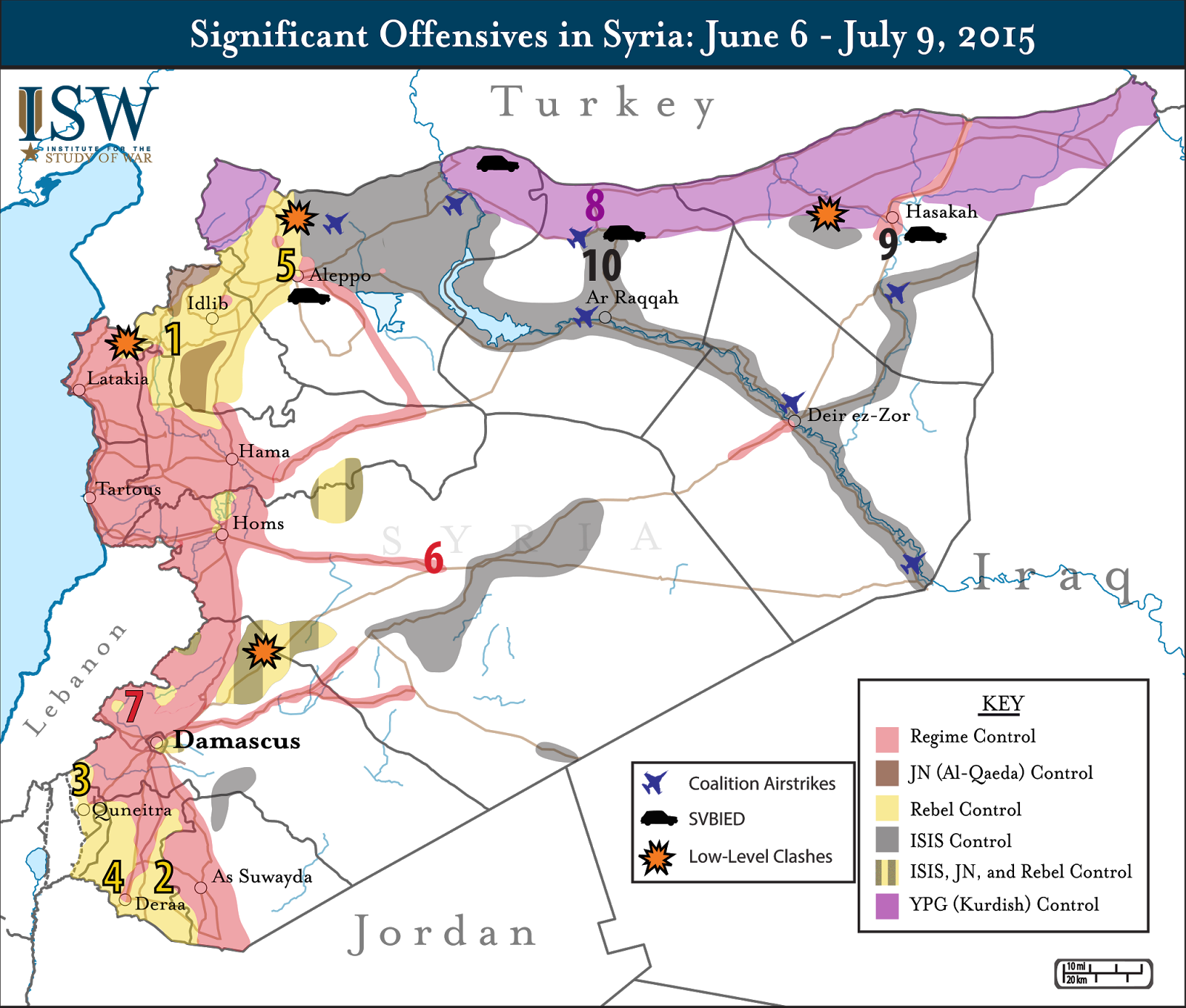 A simpler version of this map was used by Liz Sly of the Washington Post here. What the map shows is Assad controls a lot of urban territory and the Caliphate controls key strategic sites, but in terms of territory IS controls far less than a third and nothing like 50% of Syria.

What's going on in Yarmouk?
Back in May I posted a long piece on Yarmouk, the site which exemplifies the suffering brought about by Assad and his frenemies ISIS - and which exemplifies the indifference of the Western left to this suffering. The sad fact is that nothing has improved since then, and in fact things have worsened.

Most media sources still recite the figure of 18.000 left in the camp (less than a tenth of the original population), but the PLO is saying there are only 7,000 left, with deaths to starvation and untreated illness and with more residents fleeing (some to other Palestinian communities and camps around Damascus, many of which are on the frontline of fighting and little safer). This heart-breaking piece in the Guardian chronicles life in Yarmouk.

Why have the US trained so few rebels?
There has been a lot of crowing about desultory US attempt to train Syrian rebels to fight ISIS. For many, this has been taken as evidence there are no good guys left: no "moderate" rebels. Kyle Orton explains why this is wrong:


Why it was expected that the rebels would abandon their fight against Assad—whom they are after all rebelling against in defence of their families—to become the U.S.’s Arab JSOC force is not clear.

Hassan Hassan adds: "even those who have joined the programme will be treated as mercenaries by fellow rebels as long as the focus is ISIL not the regime." As Kyle argues, "the failure of this program is a feature not a bug". It is an indicator of Obama's wrong strategy, not his failed strategy.

What about the refugees?
The lack of concern about what goes on in Syria from the Western left is contrasted to its noble concern about the refugees in the Mediterranean. Syrians now account for a third of Mediterranean migrants and up to 60% of refugees arriving in austerity-crippled Greece, for instance. Tory politicians have tried to downplay the Syrian dimension by highlighting Africans or claiming these are "economic migrants". Leftists, human rights advocates and liberals have rightly challenged this.

However, the next step from this should be obvious: addressing the refugee crisis means addressing the Syria crisis. It is shameful that pro-refugee voices are not also speaking out on what causes the refugee crisis. It is the Assad regime, and especially his airstrikes, which is doing this. This Syria UK post makes the argument and sets out what we can do to stop it. And we do need to stop it, before it's too late.