What's going on in Syria? A summary of some of the issues of the last two years

This post links to a few important pieces about Syria written over the last year which I have had open in my tabs. First, I wrote the following two paragraphs at the very end of 2017, as part of a post I never finished, and they are still as true now nearly two years later.

A narrative is gaining ground in mainstream accounts that the war in Syria is winding to a close, that Assad has won, and that, although imperfect, his consolidated rule will bring stability and peace back to the country. This narrative is fundamentally wrong. Just as 2016 closed with the horrific siege of East Aleppo,  which captured the public imagination of the West, 2017 closes several months into the equally horrific siege of eastern Ghouta, which has somehow failed to capture that imagination. Yarmouk, Jobar and other liberated zones are also under hellish starvation, siege and bombardment. In the liberated zones, local councils - models of participatory democracy as inspiring as Rojava's - and civil society (including the beleaguered White Helmets) continue to sustain the people, sometimes in the face of oppression by HTS and other Islamist armed groups, who continue to be a focus of resistance for the on-going revolution.

While trumpeting some of its media-focused joint offensives with Russia against ISIS, the regime continues to work hand in hand with ISIS to fight HTS and rebels on other fronts. The regime-controlled zones of Syria are far from havens of peace and security, but a feudal patchwork of gang turfs and protection rackets controlled by the various local and foreign warlords to whom Assad has outsourced defence of his fiefdom. His own forces are depleted, and he is dependent on increasingly violent forced conscription, mercenaries, Chechen and Ingush guns for hire, Iranian-paid militias, foreign fighters, and permanent Iranian and Russian forces. Territory conquered by the regime from the rebels are bleak places of terror. Returning refugees face forced conscription and imprisonment. Meanwhile, Syrian elites enrich themselves; Chinese and other transnational corporations circle like vultures, eyeing the profits of "reconciliation" and "reconstruction". The US and its allies, while continuing to bomb civilians in ISIS territories, are increasingly disengaging with rebels and with civil society in the liberated zones. The Violations Documentation Centre, the Syrian monitoring group with the most cautious methodology, has recorded the names of over 10,000 Syrians killed in rebel territories in 2017; the Syrian Network for Human Rights has recorded over 9000; the less cautious Syrian Observatory for Human Rights has recorded this number of civilians and a further 14,000 rebel fighters.


How bad was the destruction of Ghouta?
The Atlantic Council has published a detailed report, entitled Breaking Ghouta, on the Assad/Russia bombardment of Ghouta early in 2018. There are detailed sections on siege, access and aid; on chemical weapons; on hospital attacks; on "reconciliation"; and on disinformation. If you can't stomach the whole report, this Sky News item summarises it well.

Is the Syrian revolution over?
This Waging Nonviolence post from a year ago, by Julia Taleb, tells the extraordinary story of the resilience of the Syrian revolution, with the return and continuation of weekly protests in liberated (and some regime) zones, resisting both the regime's bombs and jihadi warlords. And, from December, this piece by Anand Gopal describes life in Idlib, "Syria's last bastion of freedom". Is Idlib a terrorist haven?
The latest installment in the Assad/Russian disinfo playbook is the claim that Idlib is awash with "terrorists" and in particular "al-Qaeda". Among those who are repeating this claim are Noam Chomsky, Vijay Prashad and David Duke, a bizarre convergence of the anti-neocon left and right around talking points straight out of the post-9/11 war on terror. This piece by Sina Zekavat demolishes that myth.

Does the Assad government really want to fight terrorists?
The worst Sunni jihadi group in Syria is of course ISIS. A big part of the narrative the regime promotes in the West is that the regime is the main opponent of ISIS and that the West should back Assad to stop them. In fact, as close Syria watchers have been saying for a long time, it's not so simple. This piece from October by Maysam Behravesh shows how the regime has used Daesh strategically to try to break the opposition: in October, regime forces transported more than 400 ISIL fighters late Sunday from the desert near the town of Albu Kamal, to get them away from Iranian militias and into Idlib; the previous May, the regime transported as many as 1,600 ISIL fighters and family members from the Hajar al-Aswad district and Palestinian Yarmouk refugee camp - an ISIL stronghold in southern Damascus since April 2015 - to the Badiya region, a vast stretch of desert in southeast Syria, from they were free to move more or less wherever they wanted; and in 2017, in a deal brokered by Hezbollah, hundreds of ISIL fighters and their families left, under Syrian military escort, an enclave on the border with Lebanon (where they threatened Hezbollah) for the eastern province of Deir az Zor (where they threatened Kurdish forces instead). So, no, the regime isn't serious about fighting ISIS, just about maintaining its power.

Is it safe for refugees to return?
In October, Assad offered an amnesty to Syrians who have avoided military service or deserted the army (fear of military service is one of the significant drivers of fleeing regime territory, and there are thousands of deserters living below the radar in government held zones). Military police use Barcelona matches as opportunities to raid places where young men might be to force them into the army. In conquered zones, ex-rebels are forced into the regime military to survive. This great piece of reporting by Harun al-Aswad tells the story.

Is America trying to regime change Syria?
This is a fascinating piece by Nafeez Ahmed in Le Monde Diplo. Ahmed looks at a series of unreported US cables from the Wikileaks stash dating between 2011 and 2016 which show that senior defence analysts in the American military establishment were thoroughly opposed to taking steps towards regime change, and in particular against empowering the democratic opposition, preferring a Alawi palace coup that would give a more pliant version of the "stable" status quo. Ahmed's work, in my view, often veers towards conspiracy theory territory, but it is interesting to see that the wingnut "anti-imperialists" who often dig his output have not taken this piece up.

What role do soldiers of fortune play in the Syrian conflict?
One predominant narrative of the Syrian war is of a regular army (the regime's) backed by a conventional superpower (Russia) fighting against a ragtag gaggle of jihadist, Kurdish and other militias - some backed by another superpower (the US). In fact, after eight years of fighting, the regime side is even more ragtag and irregular than the opposition. In particular, mercenaries of various kinds play a major role in shoring up the regime, alongside foreign and local Shia jihadi militias, official Russian and Iranian forces, Hezbollah, criminal gangs and paramilitary forces. This means that sovereignty in regime Syria is no less a patchwork of warlord turf than it is in liberated zones. This post on the blog De Re Miltari, is on soldiers of fortune in Syria. It looks at foreign contractors (including 3,000 Rusian mercenaries), foreign militias (at least 60,000 men whose salaries are paid by Iran, and perhaps twice that), local guns for hire, private armies (include Hezbollah's 8,000-strong force and 50,000 in the Kurdish-led YPG) and other actors. It's an extraordinary picture. This earlier Defense Post article by Kiril Avramov and Ruslan Trad goes into more detail about the Russian private military contractors. 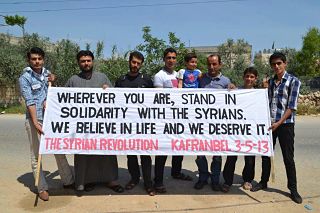