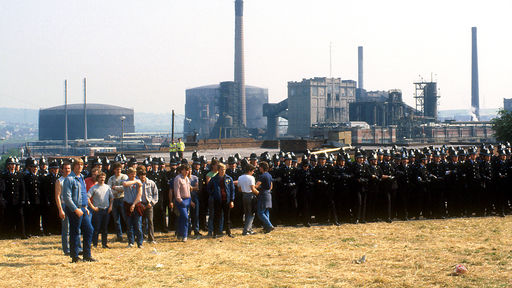 It’s Monday night, and I’ve been watching BBC4’s documentary on the Miners’ Strike, which started a quarter century ago. The documentary, focusing on a small group of Hatfield strikers, is a well made piece, and a powerful experience. Most affecting are the men, the strikers – Dave Douglass, Dave Nixon, Harry Harle, Tony Clegg, Mick Mulligan: incredibly articulate, intelligent, reflective. They relate the stories with a vividness as if they are talking about yesterday, but you do not have the sense that these are stories they have told again and again. And they have an extraordinary nobility about them. It is palpable the extent to which the experience transformed them completely, how the hatred tempered them, how much courage it took to get through it, particularly as the strike came to an end and defeat became inevitable, a shameful, humiliating defeat.


Also clear is the level of solidarity and community that was present in the pit villages before the strike, and which also strengthened by the strike. As two of the men suggest, Thatcher’s victory over the miners was partly a victory for individualism over community. Thatcher’s successors like to point to our working class communities and the social fragmentation there – “Broken Britain”; but what broke these places? Thatcher’s war on the unions, with the confrontation with the miners as the central theatre of battle, broke the institutions of self-help and mutual aid, destroyed the culture of solidarity that bound such villages, devastated a working class moral economy which sustained these communities.
The fact that this was a war is also brought home by the film. I don’t think that people younger than me can really appreciate how clearly the lines were drawn, how divided was. The picket lines were incredibly violent, with most of the violence coming from the police, especially the Metropolitan police, who acted as an occupying military force in communities like Hatfield.

And this violence was linked to the way the police protected the fascist National Front in confrontations like Lewisham ’77; it was connected to the troubles in Northern Ireland, to the uprisings in many of Britain’s inner cities, to the violence on other picketlines (most notably at Wapping), to the clampdown of the travelling and festival cultures (most importantly at the Battle of the Beanfield). was essentially in a state of civil war.

Although I am at the younger end of the Miners’ Strike generation, it was that moment which shaped me politically, which therefore made me who I am today. This is brought home to me by the visceral way, a quarter century on, that I find myself responding to this documentary. It strikes me now that – with the signal exception of the part we played in defeating the poll tax and getting Thatcher deposed at the end of the decade – all of the battles I’ve been heavily involved in have been defeated: the campaigns against the next round of pit closures in 1992, against student loans, against successive immigration and asylum bills, against the Criminal Justice Act, and so on. About five years ago, before I started blogging, I was a fan of the now defunct blog Socialism in an Age of Waiting. The title - I'm not sure if they took the phrase from someone else or coined it themselves - captured my imagination. Thatcher's revolution was almost total. The working class movement that fought so hard in 1984 barely staggers on. What does radical politics mean in such a time?

Anonymous said…
No, the title wasn't original - we lifted it from Victor Serge. Glad you liked it, though.
- Commenter Formerly Known as Socialism in an Age of Waiting
10 March, 2009 21:02