I haven't managed to keep up with the flood of sewage coming out of the nationalist left this past month. The cast of characters: a weird amalgam of Arron Banks-funded trade unionists (Paul Embery), Blue Labour's Third Way centrists (Lord Maurice Glasman), old Etonian man of the people David Goodhart, the formerly Trotskyist libertarian contrarians of Spiked (Frank Furedi, Clare Fox, etc), media professors like Matt Goodwin, and old school tankie Stalinists at the Morning Star, young Stalinists shit-posting on social media, SWP splinter sects like Counterfire, and hipster leftists at Novara and in the machinery of Young Labour, and even a few ex-anarchists. None of these currents would be particularly significant alone,although some of them are increasingly called upon pundits on daytime TV sofas and Question Time debates. But the alignment of these different formations has become an increasingly toxic force on the left. This toxic force pulls the Labour Party away from internationalist, anti-racist and pro-migrant positions (e.g. promoting pro-Brexit positions and sacrificing our right to freedom of movement). And it is toxic in terms of the culture of our movements too, driving better people away from the left.

Here, just five brief comments from me, then lower down links to some other reading.


1. Anti-fascism: However stalwart you might be in scrapping with the far right on the street or turning up to anti-fascist demos, if you  can't recognise the range of forms that racism and fascism take today (including the versions of antisemitism that circulate in the anti-Zionist movement, and the forms of war on terror Islamophobia that have been promoted by Assadists and their fellow travellers in relation to Syria), then your "anti-fascism" is insufficient.

3. The left and the working class: It is true that the left has evacuated many of the communities of the "traditional" and less traditional working class, and that the vacuum created has often been filled by the far right right. But the answer to that is not to amplify far right ideas in the hope that people buy our fake version of the far right product; it is to return to those communities with a positive, radical agenda based on solidarity.

4. Ultra-left reaction: If you say that the fact that EU free movement objectively discriminates against free movement from beyond Europe, and therefore we should abolish it, either you're living in a fantasy world (because abolishing borders, however, desirable, is not on the political table in the near future, and will be even more off the table if we Brexit, with xenophobes ascendant and emboldened) or you're dishonest. We need to defend the rights we already have, even as we demand new rights too. To advocate reactionary positions (strong UK borders) because existing democratic politics (free movement in the EU) fails to meet utopian standards is to be objectively reactionary, especially in a political conjuncture dominated by post-imperial nostalgia and far right bigotry.

5. Stalinism: Stalinism's legacy includes economic nationalism and an (anti-Marxist and anachronistic) idea of the working class as white, male, national and industrial. Stalinism should have died off decades ago, but it exerts a persistent influence, including via the Morning Star and some of Corbyn's key advisors, who play a major role in distorting Labour's Brexit position. And it has had a resurgence in social media meme culture, in a way that has spilled into Labour Party internal politics, to deadly effect.

The rest of this post is basically just a reading list of some of the critiques and commentaries that have come out about this.

Coatesy: Morning Star Tries Failed Left Populist Rhetoric against the “Political Caste” to Back Brexit (21 March, on the Morning Star, SWP and other Brexit Bolsheviks) 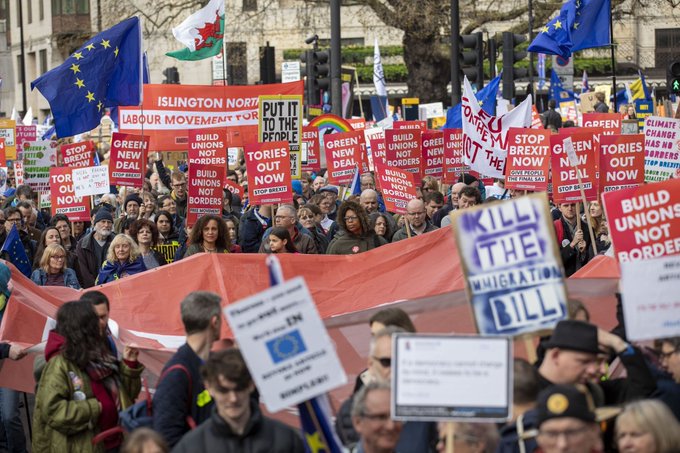 Jim Denham: After the giant march: where now for the anti-Brexit left? (25 March)

Sabrina Huck: Beware, Lexiteers, you could be paving the way for Blue Corbynism (26 March, on the British jobs for British workers ideas David Goodhart and friends promote in the Lexit scene)

Alex Fernandez: Why we joined the anti-Brexit march (27 March, a reply to Young Labour's Lara McNeill and her attack on the People's Vote march, reposted at Shiraz Socialist)

Paul Mason: To defeat an insurgent far-right, Labour must resist Brexit with all its force (27 March, sharp response to Lexit idiocy, with stats)

Coatesy: Leave Means Leave (31 March, on Spiked and the celebration of populism)

“I won’t hesitate to call out racism” – Clive Lewis replies to Marcus Barnett (31 March, a sharp response to those supporting Eddie Dempsey's attacks on Lewis)

Coatesy: Pro-Brexit Morning Star Wades into the “Eddie Dempsey Affair” and Mounts Campaign Against Anti-Brexit Labour MP Clive Lewis (1 April, on Red London and all the other Stalinists getting behind Eddie Dempsey)

Red Meridian: The Left and the Myth of the “Working Class” Brexiteer (2 April, an analysis of the numbers to show that "the working class" are far from monolithically pro-Brexit)

And here are some Twitter threads about Eddie Dempsey: Tom Harris on his friendship with dodgy pro-Russian militias in Eastern Ukraine; dmk1793 on Dempsey and "Solidarity with the Antifascist Resistance in Ukraine" (SARU); me with some background on SARU; Paul Canning on Dempsey's role in spreading Putin misinfo; Kojo on Dempsey and his mate Steve Hedley and their sexual politics; Oz Katerji on the time when Eddie Dempsey did security for Vanessa Beeley and Gerry Downing; me on some recent interventions against left nationalism.
Email Post
Labels: Brexit Left nationalism Lexit