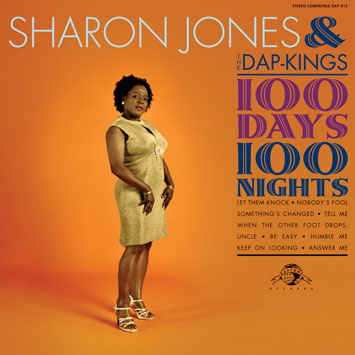 Thanks to Andrew, I have discovered Sharon Jones and the Dap-Kings, superb old school southern soul singer. She blows Joss Stone and even Amy Winehouse out of the water. As an old leftie, I particularly love her cover of Woody Guthrie's "This Land Is Your Land", with some slick horn-playing from the Dap-Kings.

Sharon Jones’ version is not hard to find; for example, it forms part of a nice July 4th mix from Some Velvet Blog. You can listen to Woody’s original at Music for Humans, who appropriately puts it in a September 11 post, or at the wonderful Keep the Coffee Coming, who gives some context to the song, or at Midwestern Housewives, who rightly describe Woody as a punk rocker. Keep the Coffee Coming also has a version by Commie folksters the Weavers, who are part of the sound of my childhood (see number 1 here), and by another Folkways giant, blacklisted during the McCarthy years, Cisco Houston. The grossly underrated Tennessee Ernie Ford also did a version, which can be found at this July 4th post from Record Robot (note to Europeans: the post might be too American for your delicate old world sensibilities). For a somewhat odder, but very affecting, version, check WFMU, who give us the Hi-Hats, a band made up of musicians with learning disabilities (and a vocalist who sounds very much like Pete Seeger).