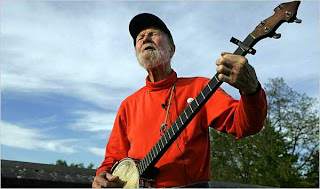 Amazingly, I did not notice this NYTimes story when it appeared Sept 1. I read about Seeger this evening on worldnetdaily, the rightwingy website, and then I googled and found the Times article. The article links to a short piece by Seeger's former student Ron Radosh.

The story had been linked to and commented upon by many blogs, but this was all news to me until a few minutes ago.

If you did not live through my time and in my environment, and did not experience him many times yourself, you can know only intellectually who Seeger was in the Left community of the 40s and 50s. There is no comparable person today. The outsized Bono is no Pete Seeger. He doesn't make the emotional connection Seeger made.

Joan Baez came close for a while, but she didn't have Seeger's longevity. John Lennon, Bob Marley and Fela Kuti were global Pete Seegers, but they were grandiose characters who didn't operate on the humble man-with-a-banjo level of Seeger.

Victor Jara was probably on Seeger's level, but he was murdered by the fascists he sang against. Seeger was never murdered, and while his fascist enemies gave him a hard time, they have allowed him to sing, travel, speak his mind, make many recordings (to the point of becoming an icon of American folk music generally), own property and live a very long, very happy life.

Jim Denham said…
I commented as well (though I picked it up from the 'New Statesman'), and I'm shattered to see I'm not included on your list of bloggers who've already commented. Your readers may be interested in my pearls of ant-folkie prejudice at:
http://shirazsocialist.wordpress.com/2007/09/28/pete_seeger-changes-his-tune-finger-removed-from-ear/
...or just go to the Shiraz Socialist blog and use the search facility.
Hope you'll forgive this shameless plug, comrades!
26 October, 2007 20:21

bob said…
Jim, obviously I disagree with you on folk, although lots of it can be worthy and dull. Your sentiments are shared by the SWP's Ian Birchall who wrote a letter in a recent issue of Socialist Worker (I didn't read the previous issue, but there must have been something on the Seeger defection) saying that the only thing worse than a folk singer is a Stalinist folk singer.
29 October, 2007 12:41

Anonymous said…
Problem is, what people like Jim Denham mean by "folk music" is not quite what you and I mean by it. "Folk music" originally meant what Alan Lomax and Harry Smith meant: authentic music of the folk, and that would include chain-gang hollers, back porch ballads, country church gospel music, jump-rope songs, Delta blues ...

But Jim knows "folk music" as the tradition of political songs whose verse-structure, melodies, vocabulary and instrumentation were co-opted by the Lefties from the folk canon. And this began to happen on significant scale, I suppose, in the 40s. If Woody didn't actually begin this trend, he was certainly the main driver and genius of it, as far as most musical Lefties are concerned. And then the whole Hootenany thing -- the Weavers, Josh White, Pete Seeger, Odetta ...

And then came the 60s, and Bob Dylan, Phil Ochs, Malvina Reynolds, Judy Collins, Joan Baez, the "folk-revival" and this insipid word "folkie" (which I have never in my life used, but which Jim seems comfortable with). And on and on.

So it's no wonder we read this comment today (at Shiraz Socialist here)-- which to me is more amusing than annoying:

Why does it surprise you that so many folkies are stalinists?

Actually, that fellow is not completely off the mark. A lot of "folk music" (as he understands it) is rather like the musical version of socialist-realist art.