All I got was a lousy Nobel prize winner 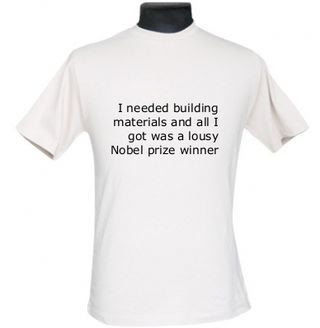 Just wading through the backlog...

Murky in Turkey: what on earth is going on in the aftermath of the Mavi Marmara?

Izzy/Pal and Zio/Anti-Zio: Ignoblus has been reading some of the same things as me (Linda Grant, Tony Judt, Ralph Seliger), and has interesting things to say.

The burka is horrible, but should not be banned: one of the best things I've read about the burka debate, by Kenan Malik.

A local blog for local people: A little more Brockley Max, a little more save Goldsmiths Nursery, and some 1970s Deptford Rock Against Racism. Maybe see you at Hillyfields on Saturday!

The English Defence League: I missed this piece of EDL news, which rather undermines Tony Greenstein's claim that the EDL are basically Zionist:


Two members of the EDL have appeared in court accused of soliciting the hate killings of Jews; they specifically face a total of 7 counts of “soliciting to commit murder”, and “using threatening or abusive language likely to stir up racial hatred”. These included posting comments on the extremist website ‘The Aryan Strike Force’ such as “Jews are parasites feeding off others”, “Jews will always be scum” Kill the Jew, Kill the Jew! Burn down the synagogue. Burn the scum”, “Jews will always be scum and must be destroyed”, and “I would encourage any religion or race which wants to destroy the Jews, I hate them with a passion”.

Why Labour lost the election: I agree with Max.

James Bloodworth said…
I actually found the piece on the burka poor. It mainly consisted of tired arguments arranged around "everybody having free-will" using spurious alledged "evidence" collected by asking French Muslims whether they wore the burka voluntarily.

The latter technique as a form of social survey would be complimented rather too indulgently were it even called naive.

He continues with his silliness:

A completely fatuous point. The smallest minority is one - they still deserve the state's protection and safeguarding of their rights.

"So why, at a time when Europe is beset by so many fundamental economic and social problems, have legislators become so obsessed by this piece of cloth?"

Again, this translates unwittingly as "why are French legislators concerned about the repression of Muslim women. It's the economy stupid."

I find that line of argument the sort that can (and has and does) excuse almost any barbaric or outdated practice.

"But what evidence exists, suggests that in Europe most burqa-clad women do not act from a sense of compulsion."

This is all the more ludicrous when he actually presents his "evidence" (a first maybe?) that essentially "lots of Women say they choose to wear it".

Has he ever tried a burka? If a woman told him she liked to be beaten, and, coincidentally, had a husband who was partial to administering doses of this punishment, would he believe her?

Female friends of mine have tried out the burka. There is very little voluntary about it.

"If legislators really want to help Muslim women, they could begin not by banning the burqa, but by challenging the policies and processes that marginalize migrant communities: on the one hand, the racism, social discrimination and police harassment"

Again, he ties a noose for his own argument with his claim that the problem is essentially the host community, and not barbaric imports based on a religious book that dare not speak its name, but within which one can find the justification for every type of abuse of the fairer sex, combined with a denial of female sexuality and the repulsive notion that all men are potentially dangerous rapists.

Banning the burka would not be banning a choice, it would be banning the enforced tyranny by the male partner/relative of a substantial number of immigrant woman.

The very fact that, although not mentioned in this article, one of the arguments increasingly being summoned against the outlawing of the burka is "what if the husbands/family proceed to not allow the famale out of the house at all?" tells us all we need to know.
18 June, 2010 16:07

Judeosphere said…
With regards to Turkey, I recommend this recent column in the newspaper, Hurriyet, which takes Prime Minister Recep Tayyip Erdoğan to task for fanning the flames of anti-Israeli, anti-American sentiments for political gain.

Previously he had made references to the “Jewish controlled international media” but must have been warned by his advisors that this was too overtly “anti-Semitic,” and thus politically incorrect. This no doubt forced him to make a slight modification in his nevertheless anti-Semitic reference to the international media.
18 June, 2010 16:07

bob said…
James, I am very sympathetic to your view, but I disagree. When I see someone in a burqa, or more specifically in a niqab, I feel sickened. But the fundamentally illiberal response of banning is the wrong solution. I don't think that Malik thinks that the problem is essentially the "host" community; here and elsewhere he condemns the barbaric beliefs behind the burqa. We need to combat those AND ALSO combat the racism in the "host" society.

I also think it is dangerous to challenge Malik's most dubious argument (that women who wear the veil want to) with the notion that they are coerced regardless of what they say. Your line of argument here is equivalent to the orthodox Marxist line that any worker who says he is happy is the victim of false consciousness, an argument which if taken too far can lead to the gulag or to the Red Army Faction and the Weathermen.

Judeosphere, thanks for that. The more I read about the Mavi Marmara (including material I have read at Noga's prompting), the more significant I realise the Turkish dynamic is, including both the internal dynamic, wherby Erdogan's government is using the age old technique of pointing attention at Jews/imperialists to deflect from internal problems, and the external dynamic, whereby Turkey is attempting to fill a power vacuum in the Middle East left by the end of American hegemony. In this power vacuum, a realignment away from America and Israel and towards Iran (and to a lesser extent Russia, China and, more benignly, Brazil) is a source of concern, not just for Israel and "the West" but also from a global perspective.
19 June, 2010 21:10

Some extracts from the article in question:

The results: a president who thinks he can charm the Muslim world, even the radicals, and whose advisors think that it’s best not to even speak of “radical Islam” lest we offend “true Muslims” who know that any violence is against the “true teachings” of Islam - a useful infidel’s fatwa against Osama and his ilk, if you will.

And Muslims are becoming increasingly aware that their “Islam is a religion of peace” mantra is wearing thin.

In any case, the grotesque hypocrisy of the Muslims in these matters.

The person (or entity) that cannot spot malevolent hypocrisy is a suicidal fool.

Should a blog that supports this kind of thing really be in your friends and comrades section?

It's honest at least. No pretense that it's about criticism of Islamism or even Islam. It's specifically against Muslims, as individuals. And the Z word are happy to go along with this.
20 June, 2010 21:46

modernity said…
Well, Z-word blog even solicited a post from me ages ago arguing against a ban on the Burka, they are that, er, liberal....

Not one of my best posts, but I think all of the heat and gas that comes out in the mainstream debates, particularly in France and Belgium on this topic seems to me to be basically xenophobic.

bob said…
Mod, I like how you artfully connected the two of the three apparently completely unconnected issues in this short comment thread!
24 June, 2010 12:19