Why horseshoe theory is nonsense 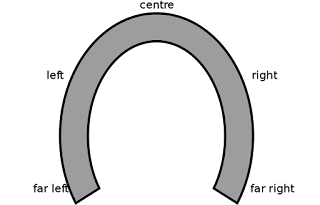 2. Horseshoe theory reduces politics to a left-right line. Although it adds a second dimension by curving the line, horseshoe theory essentially sees politics as linear, stretched between left and right. This was simplistic in the mid-twentieth century, when left v right was the main cleavage in politics, but it is even more inadequate in the complex reality of today. Contemporary politics is full of political movements or currents which are socially conservative while economically liberal (Thatcherism and Reaganism), or socially liberal while economically "right-wing" (David Cameron), or socially "right-wing" while economically "left-wing" (Blue Labour, the revived SDP, Steve Bannon, Neil Clarke).

3. Horseshoe theory sees politics from the perspective of the centre. The idea of a sensible mainstream versus fringe/extreme positions at the far left and far right is an inherently centrist idea. The horseshoe image perpetuates the status quo and devalues radical criticisms as versions of "extremism". This is obviously problematic when viewed from a non-centrist position, but also covers up how it centrist and "third way" forms of politics (including some of the mixed, or "syncretic", positions mentioned in the previous bullet point, such as Blue Labour) actually have far more in common with fascism than more radical forms of socialism do - see point 6 below.

4. Horseshoe theory erases libertarian leftism. Horseshoe theory works best as an observation when you place the twin totalitarian systems of Stalinism and Nazism at the furthest, touching ends of the left-right line. But in what sense is Stalinism (which was nationalist and deeply conservative socially) more "left-wing" than anarchism or libertarian communism? If you add a libertarian-authoritarian axis to your view of politics, which most people now do, it's obvious that left-right convergences tend to be in the authoritarian zone rather than features of the extreme left-right edges. Of course, there have been attempts to co-opt anarchism for the far right (see e.g. "national anarchism" and "autonomous nationalism"), but this is the exception not the rule.

5. Horseshoe theory erases the anti-fascism of the left and the anti-communism of the right. If we look historically at resistance to totalitarianism, you would find far more of it among political radicals than among centrists. While there have been centrist, liberal and even conservative anti-fascists, the great weight of the anti-fascist movement has been from the radical left: anarchists and communists (the latter albeit with blips - see point no.7 below). Successfully fighting fascism often requires unconventional - "extreme" - strategies, which centrists are reluctant to deploy. Painting the far left as akin to the far right erases this history. Similarly, centrists and liberals have been anti-Stalinist, but it is among democratic socialists, anarchists and left communists that the sharpest critiques of Stalinism have been found. Anti-communism, as opposed to anti-Stalinism, has been found among liberals and social democrats, but is more typically a right-wing position, and - just as Stalinists used anti-fascism to recruit and bind supporters - anti-communism has been used to recruit and bind fascist support.

6. The centre has been susceptible to the fascist creep too. Placing the political centre at a sanitary distance from extremisms like fascism is a flattering narrative for the political middle (see point 3 above). In fact, the political middle has been a breeding ground for fascism too. Oswald Mosley, the leader of British fascism, is a good example. He started off as a Tory MP before crossing the floor to Labour, where he became a Fabian and allied himself with Ramsay MacDonald (in whose government he served), then founding the New Party as an explicitly centrist party before he fell under fascist influence. Similarly, the "neither capitalism nor socialism" ideal of "third way" politics (e.g. Tony Blair) resonates with the "third position" stance taken by many fascists. (In fact, some fascists, such as the British micro-party Third Way or the French Troisième voie actually took the same name as Blair's idea.) Today, we can see examples of a fascist drift from the political centre when we see how many antisemites there are in the Lib Dems, from Baroness Jenny Tonge and former MP David Ward on down. 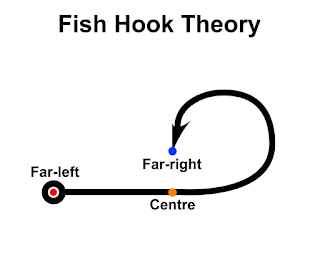 7. Other theories are available. The susceptibility of the centre to fascism has given us the "fish hook theory" (picture above) as a counter to the horseshoe theory, but this has many of the same problems as the horseshoe one, starting with not being a theory, as well as missing the fact that sometimes people on the left do enter into proximity with the far left. Slightly more helpful is what Noah Berlatsky calls "tendril theory" (picture below), which captures how fascism gets itself entangled with positions across the political spectrum. Berlatsky writes:

Fascism's ubiquitous appeal is best demonstrated post-Trump by the media's seemingly unappeasable fascination with and adoration of idealized Trump voters. From right-wing journalist Salena Zito to center-left politicians like Dick Durbin to left-wing Jacobin editor Connor Kilpatrick, writers and analysts are obsessed with the white working class as a special location of power, strength, and virtue. The racist, nationalist image of an iconically white American volk is by its very nature fascist. But it also fascinates (mostly white) politicians and pundits of almost every ideological stripe.

He's writing in a US context, but the point applies in the UK, where centrist rhetoric about purported white working class anti-migrant "legitimate concerns" is indistinguishable from similar tropes used by the Corbyn leadership, Labour lexiteers or Class War - see these posts. 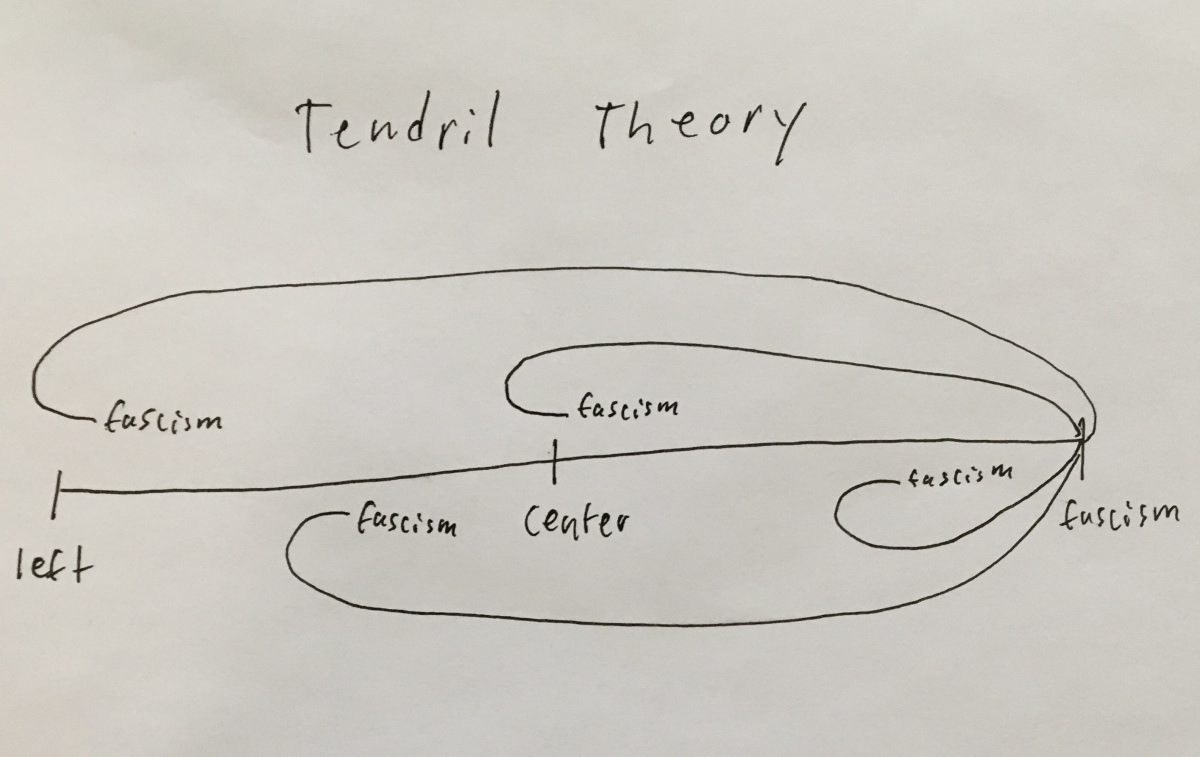 More useful ideas include:
8. Left-right convergence is better understood as strategy, not as inevitable. The horseshoe "theory" assumes there is some inevitable drift together of the "far left" and "far right". The alternative theories I listed in point no.7 instead enable us to see that the convergence comes about when the far right works at making it happen. It has been a deliberate strategy of the far right to recruit from the far left or to rebrand itself by taking imagery or terminology from the far left, in order to appeal to new constituencies such as left behind working class people or young activists in emergent social movements.


9. In a multipolar world, left-right convergence has been weaponised geopolitically. The left-right convergence is more of a threat than ever today because it is being actively resourced as part of the soft power influence operations of nation-states including Iran and, most importantly, Russia, in their geopolitical tussle against the US and Europe. Just as the US tried to harness liberal and democratic socialist anti-Stalinism in its old Cold War operations against the USSR, in the new cold war Putin's government has poured resources into influencing electoral and extra-parliamentary politics globally, and has actively promoted conspiracy theories which bind left and right and actively promoted red-brown political currents. (Matthew Lyons and Alex Reid Ross have documented several examples of this.) 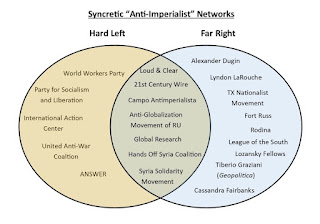 10. We need to inoculate our movements against the fascist drift. Conspiracy theories and antisemitism (Rothschild bankers, globalism, the New Word Order, the Illuminati, Zios...) as well as appeals to nationalism often serve to bind otherwise politically disparate forces. Making sure our movements understand and resist these ways of thinking is essential for making them effective radical forces. Until we learn to draw clear lines against fascism in our movements, we will always be fighting with one hand tied behind our back.

APPENDIX: The big neo-Nazi crib illustrated
Some examples from antifa.cz: 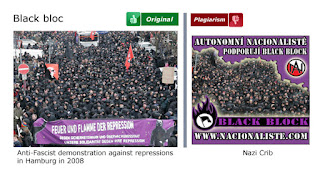 Chip Berlet: "Right Woos Left: Populist Party, LaRouchite, and Other Neo-fascist Overtures To Progressives, And Why They Must Be Rejected" (1990).

April Rosenblum "The Past Didn’t Go Anywhere: Making Resistance to Antisemitism Part of All of Our Movements".

Rich Will said…
Thanks for this, it clarifies a number of things. As you say there's more than one axis. An interesting if depressing case is the M5S in Italy, many of whose supporters believe it still to be on the left as it supports a neofascist party in government. Disguised far-right rhetoric about a 'third way' apparently supports this position.
18 March, 2019 06:43

Anonymous said…
I agree entirely. While it's always been my opinion that the idea that far left and far right somehow 'meet' is simplistic nonsense (though a useful self-serving nonsense for centrists), and self-evidently not true, I have changed my view that left-right is some sort of one-dimensional line with the two at opposite ends.

Increasingly I start to wonder if it can be reduced to a single position on a line, or the co-ordinates of a two-dimensional plane (a model particularly beloved by libertarians). Rather there are a vast number of different political stances that sit in an N-dimensional space, that at times becomes such a mess it becomes impossible to consider it quantitatively at all, and can only be described qualitatively and narratively. i.e. with verbal descriptions of the social relationships and histories of each faction or tendency.

In the end, most people are motivated by self-interest and formed by their particular experiences. So you get as many political positions as there are interest-groups. Only in particular contexts and eras do those positions form a recognisable left-right axis.
16 December, 2019 04:34

Anonymous said…
When you said "the antifascism of the left", that's when I figured out you were a Poe (tip: the "antifascism" of the left is just fascism, so you can update your cute little script).
I enjoyed it. It was funny.
16 December, 2020 17:10