I want to sleep with common people II 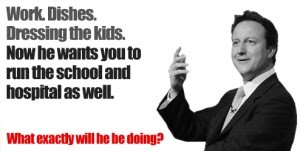 I could only bear to watch about 10 minutes of the leaders' "debate" on ITV on Thursday night. I caught the bit where they were talking about education, where David Cameron said - twice - talking as a parent with children in state schools. I found this nauseating. Especially as I read this earlier in the day, from one of his maringally less posh than him neighbours:


His local school, Oxford Gardens Primary School, which all three of my children attend, is Kensington and Chelsea's largest state primary, with fantastic staff and great children who represent London's huge multicultural mix. Motivated, giving parents — just the sort the Tory leader talked about Tuesday — are a huge help to its head teacher, Sarah Cooper, who relies on them to keep improving the school.

Though the Camerons are in the perfect position to contribute to their community school, they felt that their child would be “a bit lost” there. So she attends St Mary Abbots, an exclusive CofE school two miles away in a significantly richer community. Nor, to my knowledge, do they attend their local CofE church, St Helen's, two streets from their home. The Camerons judiciously began attending St Mary Abbots church three years before their daughter started at its adjoining school.

This is their prerogative and, hey, if parents want to jump through such hoops in order to secure a more exclusive education for their child, who I am to judge? But Dave, don't then start lecturing me about community values. “Do as I say, not as I do” is a stance that has contributed mightily to our disdain for politicians.

Writing as someone whose child does go to the local state school, I am also irritated by his party's notion that parents should be "empowered" to take over schools, a continuation of the sick Thatcherite "choice" agenda that has been ruining our education system since 1979. Parents don't want "choice" or "empowerment"; they want their most local school to be decent.

And, of course, this is especially grating when Tory slash-and-burn economic policies mean spending some £1.7bn less on education than Labour in the current financial year, meaning a loss of some 38,000 frontline education jobs.