Last years at Abbottabad: A review of Christopher Hitchens’ ‘The Enemy’

This is a guest post by Carl Packman, cross-posted from Though Cowards Flinch. 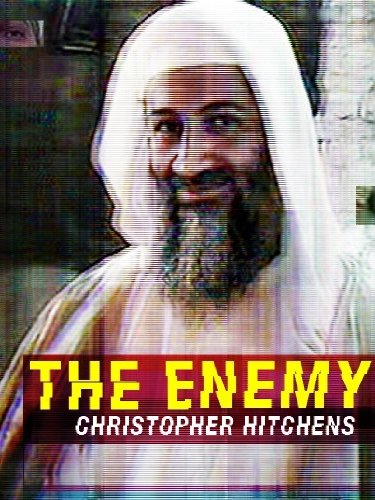 Nearing the tenth year since the world was changed by 9/11, the mastermind behind the attack, Osama bin Laden, is traced to a fortress-like villa in Abbottabad and killed. As the media storm blew over, and initial questions about the legality were put to rest (though some still insist on raising them), there was still the opinions of one person for whom many were waiting – and indeed he has not disappointed.

Though there is nothing in Christopher Hitchens’ extended essay – 'The Enemy' (available as a Kindle download only) – that is particularly new; one or two unorthodox opinions concerning bin Laden needed clarifying, and there is no better than the Hitch to do so.

Notably, the polemic is peppered with understanding this personification of ‘evil’ (a word which Hitchens is happy to qualify) through political terminology. Hitchens is happy to call bin Laden a fascist, for example, explaining his unease with the vulgarised word ‘Islamofascist’ (preferring, instead, the more informed “fascism with an Islamic face”), while later insisting we remember the true conservative core of the former al-Qaeda front man.

There is an urge, so opines Hitch, to refer to bin Laden and his men, as radicals – a juxtaposition which sticks in the throat, particularly on consideration of the medieval tyranny which the wealthy ideologue wanted to wreak upon the world. Unlike any radical, in so far as the word is typically used, bin Laden fought on behalf of a totalitarian world view with an absolutist code of primitive laws. His fantasy world order necessitated the ceasing of personal autonomy, the deification of human control, the fetishisation of a single book, the glorification of violence and the celebration of death. Further still, a sanctioning of the death of whole groups of people, the repression of the sexual instinct and a paranoid anti-Semitism akin to that found in the Protocols of the Elders of Zion.

There is no doubt that what bin Laden did on that terrible New York day in September, was a tragedy like only few others. Quite clearly bin Laden was waging war*. But it mustn’t be forgotten just how much his late life had been marred by errors and grave failure.

Bin Laden was laying down his plans for war at a time when  many “Arab Jihadists” – such as al-Qaeda, Gamaat al-Jihad, Gamaat Islamiyya, the Libyan Islamic Fighting Group (LIFG) and the Moroccan Islamic Combatant Group (GICM) – were restructuring their position in Afghanistan, after the defeats they endured in the nineties throughout the Middle East. After preparing attacks on America in 2000, al-Qaeda knew America would have capabilities to destroy the Taliban’s governmental institutions – which were acting as host to Bin Laden’s motley crew. In advance, Mohammed Atef, the third highest ranking member of al-Qaeda, had sought after weapons of mass destruction to protect Afghanistan.

It was bin Laden’s pipe dream that acquiring WMDs would have deterred the US from retaliating, securing the start to a victory for the Saudi and his group. However the acquisition didn’t go to plan. Accepting defeat at this first hurdle, al-Qaeda tried to send a message, through a reporter in Afghanistan trying to make his “media break”, to the US saying they were in possession of WMDs. This, too, proved unsuccessful, the likelihood being that US intelligence simply didn’t believe bin Laden. Instead the American representatives in Afghanistan asked the Taliban to hand over bin Laden for trial, a favour they did not succumb to citing the illegality of handing over a Muslim to non-Muslims under Islamic law.

After experiencing setback after setback – the death of a leader in the Gamaat Islamiyya, Mohammed Khalil al-Hakaima, who fronted the “al-Qaeda in the land of Egypt” project; the collapse of the jihad against the Americans in Iraq – the former leader of the militant Jihadists Libyan Islamic Fighting Group Noman Benotman (now Senior Analyst of Strategic Communications at Quilliam) said that al-Qaeda did not want to establish a caliphate in Afghanistan, and was merely acting as a defense against the occupation – a clear back step on their more global plans.

Though bin Ladenism, as Hitchens puts it, is destined to fail, this doesn’t mean it is not dangerous, particularly in its teachings of young, mainly uneducated men. Its overall goal is to engage in a global war, which it hopes to do with coordination from a central command, possibly in Warziristan (NW Pakistan), branches at a regional level and with help from sympathisers around the world. And though they’ve experienced a major setback with the death of bin Laden, the aim of their project doesn’t look set to cease any time soon.

Hitchens’ sobering conclusion, quite in distinction to the reaction displayed on TV screens after news emerged of bin Laden’s death (which, however, Hitch admits to having “welcomed without reserve”), is that “[t]he war against superstition and the totalitarian mentality is an endless war” and that "Temporary victories can be registered against this, but not permanent ones”.

Osama bin Laden died a failure, reduced to watching re-runs of himself delivering propaganda speeches exploiting young, angry men into thinking that fighting the jihad was the solution to all life’s ills. But it is a fool who thinks the efforts of a crafty (albeit damaged), multicellular entity as al-Qaeda have been suppressed yet.

* Much of the information from here on has been sought from this amazing collection of essays by Camille Tawil called The Other Face of Al-Qaeda (pdf file).
Email Post
Labels: Guest post The Hitch War on terror