I've been searching my soul about the point of blogging, anonymous blogging, comments policies and such things. Here are two things I found helpful: Martin's account of his online life, and Paul's new comments policy.

I've been reading a lot on the interweb about The Promise, and thought I'd bring back some of the things I've read: reviews by Tom Jennings and Trouble Sleeping, and critiques by Ariadne and Richard Millett and (in French) Bruno Halioula. I've also been reading about some of the histories The Promise touched on those it didn't touch on - the liberation of Bergen-Belsen, the Hadassah convoy massacre, Britain's small war in Palestine, the 1947 riots across the UK, the 1947 Cheetham Hill riots. I also read Linda Grant's migration story, which touches on this period and on the 1947 riots (and if you haven't read her When I Lived in Modern Times, which is set in Palestine in this period, you should). 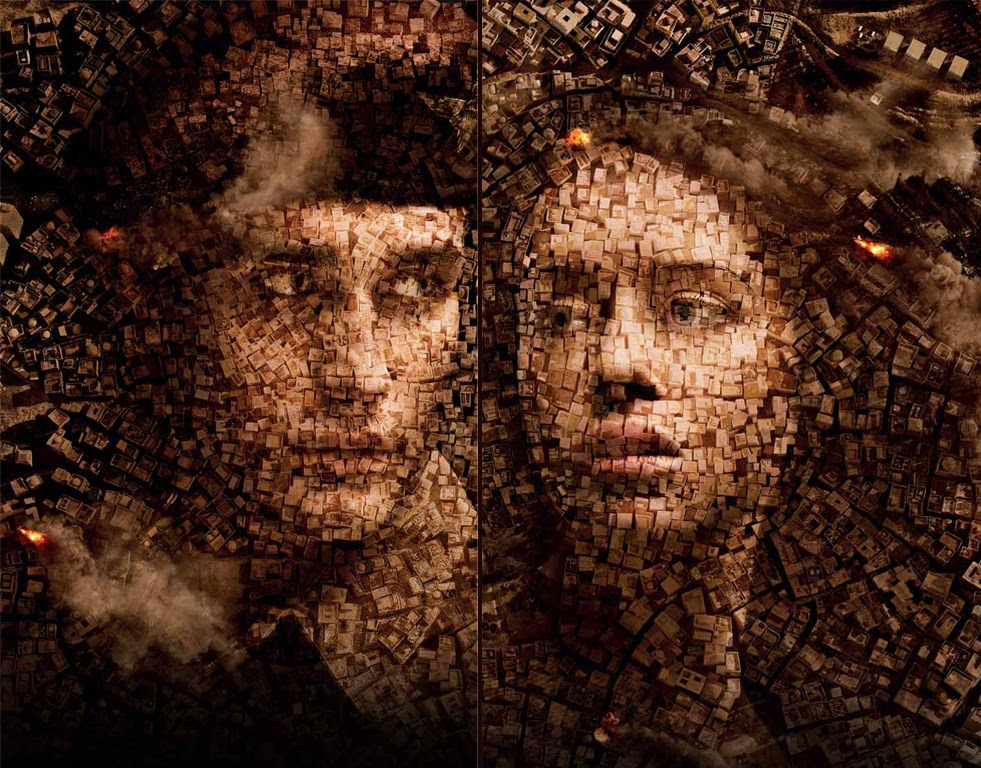 These are the final words of the Tom Jennings review:


Doubtless unintended by Kosminsky, and naturally unnoticed by critics, her blundering around sundry hotspots ignoring the interests or opinions of locals in favour of private desires – dotted with periodic fits of humanitarian impulse and seizures of moral outrage – uncannily mirrors the structure of single issue hobbyism and ‘struggle tourism’ as well as official news coverage and its respectable reception. So, despairing at horrors endured by distant others, comfortable Western handwringers move onto newly fashionable concerns – never taking seriously, sustaining, or prioritising above self-satisfaction the grassroots perspectives and efforts which have meaningful potential either at home or overseas.

So, in that spirit, here are a few news items from Israel/Palestine that might have slipped beneath the radar: Syrian Border Violence May Hold Message for Israel, Palestinian workers risk life to seek work opportunities in Israel, Foreign caregivers: New law would make us slaves, Israel railway workers wildcat strike ignited by arrest, beating of union leaders, Dispossession and Exploitation: Israel's Policy in the Jordan Valley & Northern Dead Sea, Egyptian police wound 350 ‘Nakba Day’ protesters, Jordan police say 25 hurt in Nakba clashes, Israel to hand over Palestinian tax revenues. Analysis: CAMERA debunking of Nakba day coverage and some perspective from It's Complicated. Comment: Eric Lee and Gary Kent on a neglected part of the Arab spring and Michael Totten on Nakba Day’s Deadly Political Theater. Oh, and I often don't agree with Juan Cole, but he is spot on when he says this: "Syria’s protests about the Israeli rush to use live ammunition on protesters would have carried more weight had the protest issued from quarters not engaged in a similar deployment of live ammunition on… protesters." However, it seems to me that the policies of the current Israeli government, including the use of what appeared to me to be excessive force at its borders on Nakba day, is, as Cole puts it, literally self-defeating; a radical change of direction is long overdue, if not too late.

Another of my obsessions, Israel Shamir, Counterpunch's favourite Holocaust denier.There's a new two-part piece by Will Yakowitz in The Tablet well worth reading: 1, 2. It includes Norman Finkelstein's denunciation of Shamir as a maniac, a fascinating interview with the maniac, and concludes with this:


In the early 2000s, Shamir was nothing but a marginal anti-Semite and a prolific writer. But at that time one could write him off as a lunatic, or a self-loathing-Jew, or just a weirdo. But now, with Assange’s backing, Shamir has become a legitimate source of news and facts with a legitimate platform that is hard to ignore. His ideas may be heretical, mad, coming too fast to digest, but the Age of Assange has made Shamir less eccentric, more central—a dangerous man.

Sticking with left antisemitism, Mark Gardner of the CST has a post at Arguing the World called "Routledge’s Journal of Contemporary Leftist Anti-Semitism", about a disgraceful review by former UN official, Frederic F. Clairmont, of an appalling book by moonbat antisemite James Petras, published in a mainstream journal on whose editorial board Noam Chomsky sits. Petras, who we've looked at a few times here, is also an exemplar in Alan Johnson's very sharp critique of the pro-tyrant left.

And on some completely different topics: A Jay Adler: Kenya, Conservatives and Colonialism; A Very Public Sociologist: Election analysis from Stoke; Joe Flynn: ‘Counterfire’ and the retreat from class politics; Dave Osler: The need for a reality-based left; Carl Packman: Belarus: May we now forget the Stalinist apologists; Third Estate: Ninth Week of the Syrian Spring; Libcom: International Statement of Solidarity with Cuban Anti-Authoritarians: You Are Not Alone; Jeffrey Goldberg: Kissinger versus Hillary Clinton; Waterloo Sunset: A respectful shout-out to the CST; Robin Simcox: Amnesty International's dubious company.

More links from the New Appeal to Reason and Martin in the Margins.
Email Post
Labels: Izzy/Pal left antisemitism

skidmarx said…
There's an obvious contradiction between Tom Jennings categories of "struggle tourism" and "comfortable Western handwringers":they're damned if they do something about Palstinian solidarity,and damned if they don't. Not a reviewer showing any promise of reason.
Picking amngst the other ziocentric stuff, Michael Totten:
The Israelis therefore have every reason to believe that a large crown of people dismantling the border fence and crossing into their territory is a threat.
It's not their teritory. Totten's previous comment that all Israel wants to do is live in peace with its neighbours, yeah, when those neighbours are on the far side of the Nile and Euphrates maybe.
Sorry if this is less than polite to your sources.
22 May, 2011 12:21

bob said…
I not sure which thread Skid you are referring to, but I might actually agree. I think there are a lot of dodgy people commenting at his place, possibly a larger proportion of dodginess than at HP.
22 May, 2011 19:47

Sarah AB - when someone on Socialist Unity asked repeatedly and provocatively if it would be preferable to have Galloway and Abjol Miah elected or two New Labour apparatchiks, I replied:
"Well, it's the devil and the deep blue sea,innit?"
22 May, 2011 22:10

Sarah said…
Oh - I looked at the recent thread about the demo which seem to be full of EDL supporters (the thread I mean). Cif Watch, also, seems to have comments which ought to be deleted according to its own criteria but instead get enthusiastic approval. I haven't read either site much though - maybe I caught them both on particularly bad days.
23 May, 2011 07:23

bob said…
I read Richard Millet's blog from time to time, as a good source of information. Generally well-written well-informed posts. But I rarely venture beneath the line, as it sometimes gets murky pretty quickly, but I hadn't noticed before the EDL types. (I'm not sure how many of them are actually real people - I tend to think the EDL's "Jewish Division" is three strange British Jews, some sockpuppets, non-Jewish EDLers and ill-informed and highly strung people dropping in from America.) I find CIFwatch posts to be generally somewhat over the top, altho with some good stuff, but the comment scene there does verge into some unpleasant territory too.

Part of the thing, in both places, is simply a Speak You're Brains type thing that infects any comment thread when there are enough readers - a good reason not to be an A-list blogger! But there is a political issue too.
23 May, 2011 09:45

bob said…
A quick word on Ziocentrism: being interested in Israel/Palestine is not Ziocentric. Michael Totten, for example, is a journalist with a wide frame of reference and a broad Middle Eastern focus, and occassionally writes about I/P. Ziocentrism is an obsessive focus on I/P from someone that has no particular stake there, e.g. a British trade union having international policies that address I/P but hardly anywhere else. Ziocentrism is taking an issue and immediately finding the I/P dimension to it, e.g. blaming the Israel lobby for something that is actually about something else. Ziocentrism is judging a person's moral integrity solely on the basis of their I/P position and nothing else.
23 May, 2011 09:55

Waterloo Sunset said…
CIFWatch is a pretty textbook example of Ziocentrism from the other side of the debate as well. It's entire interest in stories boils down to whether they're pro Israel or not- that's what differentiates it from the more general family of mediawatching blogs. DailyMailWatch etc. all come from a position of being more interested in a general critique of the ideology of the paper they watch.

Even taking into account the high possibility sockpuppeting on that thread over at Richard Millet's, we are seeing Ziocentrism from some commentators over there on the subject of the EDL. And Bob's right this is a political issue. It's why the approach some have taken that the EDL aren't "really friends of Israel" was always going to lead to this situation; by focusing on that rather than critiquing the EDL per se, you give them an inroad to make their arguments on that basis.

On the other hand, we all have our specific ideological biases. It wouldn't be especially unfair to accuse me of being antifascismcentric on most issues.
23 May, 2011 11:45

levi9909 said…
I don't think there's anything particularly untoward about a trade union focusing on the last of the colonial settler states while the colonisation, ethnic cleansing and segregation are still in progress, which they are.

What is very strange is the number of parties and groups claiming to support principles of equality, liberty and the rule of law having "Friends of Israel" sections and leaders who are honorary patrons of the main instigator and beneficiary of ethnic cleansing in Palestine: the Jewish National Fund.

I know of no other serial human rights abuser that gets as much support from the mainstream media and the government and so-called opposition as the State of Israel gets. Maybe anti-zionist activism is simply rising to that challenge.
23 May, 2011 12:53

brocklydave said…
thank you Bob for your links to other views on the promise and the 1947 riots
We should never underestimate the power of news and tv .
The more i think about "the promise " the more angry i get.
Anyone should be entitled to their viewpoint on Israeli even if i don,t agree with it
But what i found unacceptable in the Promise is that every jewish character was either flawed,violent ,arrogant,traitorous ,rich ,ungrateful,fanatical,dishonest,racist and sometimes a combination of negative traits .
If a film was made showing other groups like this many more would be up in arms.
I,d go as far as to say it was almost incitement to violence.
As i help run a youth club i can tell you that being a jewish kid at school and university is not always easy.
Not helped in one case where at an assembly a deputy head said that "jews" were responsible for the genocide in gaza on holocaust memorial day.
Continualy it seems to me the Holocaust is being mentioned in terms that we should expect jews to behave better than others.

Being asked by your schoolmates why do jews like killing Palestinians is not something anyone should have to deal with.
That rather unfortunately fits in with the link bob gave to european attitudes on race etc in a previous blog entry.
The worrying numbers who believe according to the survey that jews want to eliminate palestinians .
24 May, 2011 00:09