Today sees the start of the new series of BBC Radio 4's superb podcast programme Intrigue. This series, entitled Mayday, focuses on the late James Le Mesurier, British founder of free Syria's Civil Defence service, the White Helmets. The series also looks at the co-ordinated disinformation campaign against James and the White Helmets, touching on the role of the so-called Working Group on Syria, Propaganda and Media in this campaign.

You can read about it here, watch the trailer here, or download the whole series now. It is produced, written and presented by: Chloe Hadjimatheou, working with a team including researcher Tom Wright.

In this post, I have just brought together some of the essential background reading on the story.

On the Ledge: James Le Mesurier

The best place to start is Martin Chulov's excellent recent long read in the Guardian: "How Syria's disinformation wars destroyed the co-founder of the White Helmets".

The Miracle Baby: The White Helmets

The White Helmets formed in 2014, with Le Mesurier's support, and by 2016 had 3000 volunteers across Syria's liberated zones, including a small but growing number of women volunteers. They have rescued tens of thousands of potential victims of the government's war crimes.

In 2018, as the Assad regime (in the aftermath of the Douma chemical attack - see below) captured the last parts of the southern liberated zone in Syria, Le Mesurier and others worked to facilitate the escape to Canada of hundreds of volunteers and their families.

The White Helmets were championed by the late Jo Cox, which has made Cox a posthumous target for far right and pro-Russian trolls. Films such as Last Man in Aleppo meant that the White Helmets have received public attention in the West. This is in contrast to so many of the heroic grassroots activities of Syrian civil society, which has passed completely below the radar, despite the efforts of writers like Leila al-Shami and journalists like Kareem Shaheen.

For a great account of the White Helmets, read Omar Sabbour, showing how they were far from tools of Western interests.

Episode 3 also highlights the Syria Campaign, who you can check out here.

The Hoax Producers: the war on truth

"No hole, no Holocaust": Chemical weapons in the Damascus suburbs 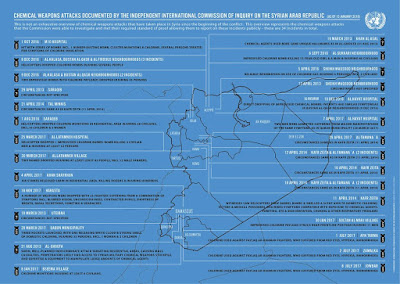 Although the Syrian government has killed far more civilians with conventional weapons, one feature of the war in Syria has been the heavy use of chemical weapons, more or less exclusively by the Syrian government. The particularly cautious UN had confirmed over two dozen attacks by 2018. BBC Arabic found enough evidence to be confident of 106. German thinktank GPPi forensically confirmed 336 in a 2019 report.
From 2013, when the Syrian government was first shown to have used chemical weapons, it has - supported by its key backer Russia - carried out a campaign of obfuscaton around this. The best piece on this long-term campaign is Brian Whitaker's long read here, which shows how Russia and Syria played every effort by the so-called "international community" to create some sort of accountability in the conflict.
A 2017 attack on Khan Sheikhoun in northern Syria saw a new intensification of the information war, but the chemical attack on which the disinformation campaign has focused on most obsessively was in April 2018 in Douma in the eastern Damascus suburbs. Contemporaneous reports by CBS and Swedish news TV, as well as thorough investigations by Forensic Architecture, the New York Times and later the UN's Organisation for the Prevention of Chemical Weapons (OPCW), confirmed a deadly chemical attack. Over 40 civilians were killed (many of their names are recorded by the Violations Documentation Centre, another civilian group dedicated to bearing witness to the atrocities of this war). Immediately after attack, Russia began tampering with evidence, and the regime intimated witnesses, demonstrating the importance to them of control over the narrative.
The Douma attack was effective: the day after it, the rebels holding in Douma surrendered. This follows a familiar pattern: BBC analysis of 106 confirmed incidents in 2014-2018 found most were clustered at the end of offensives to retake areas: to force fighters to surrender and drive out civilian populations to pave the way for re-occupation, analysis confirmed by the GPPi. Unusually,  the Douma attack caught the public imagination outside Syria too, and led to a symbolic response by the US and its allies, in which six soldiers were injured and some marginal damage done to a runway. (France and the UK reported that the Trump administration had warned Russia of the locations targeted.)
As Keith Kahn-Harris notes, denialists, such as Holocaust denialists, like to zoom in on irrelevant details, as threads which they believe they can pull on until the whole big picture unravels:

there is no evidence of holes in the roof in the ‘alleged’ Auschwitz gas chambers through which Zyklon B was ‘allegedly’ poured. ‘No holes, no Holocaust’ goes the Holocaust denier’s taunt. The Holocaust is reduced to arguments over the reliability of wartime aerial photographs of Auschwitz or drawings by survivors.

There were a few details around what happened at Douma that offer threads on which chemical weapons truthers can pull, taking attention away from the vast amount of proof for the bigger picture of dozens - hundreds - of murderous chemical weapons attacks in Syria. And none of this should be surprising: it's what authoritarian regimes do, and thus the Assad government's response to its chemical attacks exactly resembles how the Franco government sought to spin Guernica.
Brian Slocock - veteran anti-imperialist activist and academic - carefully explores how Russia attempted to use witnesses to create a false narrative around Douma (part 1, part 2). Coming close in time to the Salisbury attack, disinformation on Douma was often tangled up with disinfo on the Skripals.
Among the journalists reporting on the disinformation around Assad's chemical weapons are: Snopes' Bethania Palma ("Critics Slam Viral Stories Claiming Douma Chemical Attack Victims Died from ‘Dust’"), EAWorldview's Scott Lucas ("Russia’s (Dis)information Warfare and Assad’s Chemical Attacks"), Muhammad Idrees Ahmad ("Truth Is the First Step to Accountability in Syria"), The Intercept's Robert Mackey ("Russia Sows Doubts Over Chemical Attack in Syria, Aided by Pro-Trump Cable Channel") and HuffPo's Chris York ("How An Obscure British Blogger Became Russia's Key Witness Against The White Helmets"). The SyriaUK has also published "The BBC, the conspiracy theorist, and the Shadow Foreign Secretary" by Clara Connolly, and US Marxist blogger Louis Proyect has analysed "false flag" claims.
For a more comprehensive list of key reading about the Douma attack and the OPCW report into it, go here. Also see Brian Whitaker's important series of posts and Bellingcat's OPCW archives/Douma archives.

Key to the Russian-backed disinformation campaign against the White Helmets and in denial of the chemical attacks have been a small cluster of bloggers who have become salaried journalists for Russian state media, most notably Vanessa Beeley and Eva Barlett, who both feature in Mayday. On them read my posts "Is Vanessa Beeley a reliable source?" and  "Is Eva Bartlett a reliable source?" and Chris York's "How An Obscure British Blogger Became Russia's Key Witness Against The White Helmets". See also Javier Sethness "Radical media and the blurred lines of ‘red’ fascism".

Beeley is often featured in a semi-regular act called "Media on Trial" - see "Beeley in Bristol" by Clara Connolly, for a taste of how the live version works. Also read BBC Trending's report on Beeley and Brian Slocock's analysis of her misreporting of Daraa.


Beeley, listed as an "independent researcher", is one of the members of a group called the "Working Group on Syria, Propoganda and Media" (SPM), who give some semi-academic cover to the disinformation campaign. 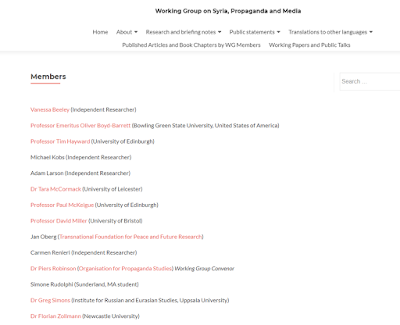 The key reading on these guys is Chris York's "The 'Useful Idiots': How These British Academics Helped Russia Deny War Crimes At The UN". In addition, the Times has reported on this Working Group several times, as has veteran Middle East expert Brian Whitaker (who also looks at the 9/11 truthers in their group). Muhammad Idrees Ahmad has also written an important piece on them for openDemocracy, and Chris Doyle has written this excellent op ed. Brian Slocock forensically tackles their allegations about the White Helmets and their claims about witnesses in Douma. Louis Proyect taks them on here, and notes how they have now slipped into Covid denialism, and socialist academic Michael Barker looks at them (and their links to the libertarian "Spiked" cult) here. Brian Whitaker notes their promotion of pro-Putin conspiracy theories about Salisbury too.

Essential reading on the whole disinformation war over Syria is the Syria Campaign's Killing Truth report. Standing back a bit: Otto English on the history of disinfomation. And three more analytical long must-reads on how the Syria truth war fits into the larger war on truth currently being fought: Amar Diwakar on Assadism in the post-truth vortex, Ümit Üngör on the coming narrative war, and Sam Hamad on the alternate reality that enables genocide in Syria.

Finally, for a really good guide to other resources online to understand Syria, start with SyriaUK.

Most of the material in this post draws on previous blogposts here. These are some: The House of Assad and the House of Rumour (February 2014);  Truth wars continue (February 2018); It's exhausting: the fight against fake news (April 2018); In the time of the multi-polar spin (April 2018); White helmets, black blocs, red flags (August 2018);  Banned bombs fall on Idlib (2019);

Email Post
Labels: denial Douma In praise of the BBC Syria The war for truth