For Noga, and I hope this is OK with Jams, I am re-posting "Twelve Fountains of Blood" by Simin Beh'bahāni from The Poor Mouth. 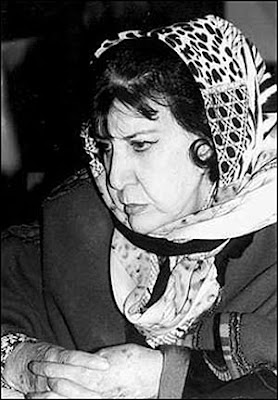 (For what sin was she slain?)

On her shirt flowed the blood from twelve fountains of blood.
In the dust of madness laid her twin jasmine braids.
streams of blood ran down her body as if not from wounds.
her mouth was open, as if an angel had made her smile.
It was as if her clothes were not sprinkled by a tyrant’s lead,
but the sky had sprinkled starts in the cup of her body.
She who sat in my class, politely, for a year, has fallen.
She does not mind me anymore.
What would Ahriman want from an angel so pure?
His kiss and death have branded her breast,
even though the two buds there had not yet blossomed.
Who has the heart to surrender to a shroud
a body like porcelain, once accustomed to wearing silk?
Her presence will never again light up her father's eyes.
Brothers, what happened to her shirt in the thick of the night?

What was her sin? Tell me. It must be asked.
Don't keep it a secret, if you hear anything about it.

From A Cup of Sin - Selected Poems.

Written in 1985 the poem was inspired by the death of one of her students during a crack down of dissidents. The 12 fountains refers to the number of bullets in a clips used by semi automatic weapons used by Iranian armed forces at the time. The quote at the top is from the Qoran (The Sura of Darkening) "When the seas shall be boiling, when the souls shall be paired with bodies, and when the girl who was buried alive shall be asked for what sin was she slain"

The Blog Opium and Saffron has a superb post on Simin Bebhahani. It is well worth a read.

jams o donnell said…
No worries at all Bob. Simin's work is magnificent. In spite of the Mullahs the Iranian art scene is vibrant. I was delighted to meet a number of really talented Iranian artists in Paris last year, including my friend Elahe Heidari
24 January, 2009 09:34