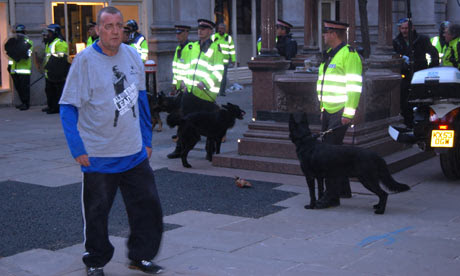 I did not go to the G20 protests last week, but I spent a lot of time in the late 1980s and through the 1990s at various comparable events, including Reclaim The Streets events, other road protests, squat parties, free festivals, an attempted levitation of Parliament, carnivals against capitalism, guerrilla gardening actions, Mayday events and anti-fascist mobilisations, as well as a few more trad protests. My overwhelming sense of the police was of a tooled up army, relishing confrontation, snearing, provocative, pleased at having the opportunity to actually hurt people.

During this period, there were a number of high profile incidents that discredited British policing: the revelations of a series of shocking miscarriages of justice that led to men who were utterly innocent of any crime other than Irishness languishing behind bars for years (I saw Paddy Hill speak a few times, which affected me greatly), the total failure of the Met to investigate the racist murder of Stephen Lawrence, literally dozens of unexplained deaths in police custody, the shooting of Harry Stanley.

I had no doubt, during that time, that I was not on the same side as the police. If I saw police officers stopping someone on the street, my presumption was that he was in the right and they were in the wrong.

Around the turn of the century, a number of good and bad reasons led me to being less active in demonstrations - time, energy, kids, political doubts. I came to see demonstrations like those against the G20 summit in a more jaundiced light - as gestural acts that do more for the psyches of activists than they do to make the world a better place.

In the noughties, I was also affected by a number of crime incidents: a series of horrible incidents my sister experienced on the council estate in Southwark where she lived, the repeated burgalry of a close friend of mine. At a certain point, if I saw police officers on the street, they were no longer the enemy and, at times, they even made me feel reassured.

I don't think I exactly turned to the right because of this stuff. (Who was it said "A conservative is a liberal who has been mugged"?). The people who most experience street crime and burglary are the most vulnerable in our society, and my rage against social injustice increased rather than decreased as I became more aware of this sort of crime. (In fact, some of the most radical groups of the 1980s and 1990s - Class War, Red Action, the Independent Working Class Association - were distinguished from the insipid left precisely in taking seriously the anti-social crime which liberals ignore or seek to explain away.) But this sort of thing led to something of a reappraisal of some of my most deeply held attitudes, and part of that reappraisal was not having any motivation to be in the City of London on April 1 2009.

Last week, though, hearing a very senior police officer anticipate the violence at the 1 April actions with the phrase "We're up for it" brought it all back. I once had a long conversation in a pub with a very smart police officer who had policed many of the demonstrations I had been on in the 1990s. He described the sense of becoming part of something bigger than yourself, of becoming part of a military machine. Of course, I think something of this dissolving of the self happens with protesters too. I guess this is a small, pale reflection of how soldiers feel in war-time. You can see it, though, in the bodily disposition and on the faces of the police officers in the now notorious video of Ian Tomlinson's last moments.

Ian Tomlinson, walking home from work, showing by keeping his hands in his pockets that he is not causing trouble, walking in the direction the police want him to walk, struck by at least one officer, for no reason. His head hits the pavement, and he dies minutes later. The police then lie about his death. Disgraceful, but not, alas, shocking.

HarpyMarx draws a comparison with the brutal policing of the Tamil demonstators in London yesterday, an outrage which (rather like the Sri Lankan government's massive assualt on Tamil citizens) seems not to interest so many people.

fleshisgrass said…
Personally (like Matt Sellwood to whom you link above, only with more adjectives) I think that unlike say Put People First, Financial Fools Day was a heinous, pointless, futile, self-indulgent, inarticulate waste of time, and the fact that the person who died hadn't intended to be involved has a terrible symbolism. You should never be complacent about the police and their state power, but the self-righteousness of the people who, with no plan except to turn up and cause trouble for The Authorities, caused them to turn out in riot gear ... well... it's fucking depressing. Shame!
08 April, 2009 17:43

Francis Sedgemore said…
In my view, the Put People First march (which I attended, and during which helped carry my union banner in a 25 km/h wind!) lacked focus and passion. The rally in Hyde Park was especially disappointing, and it's no wonder that many of us slunked off to the pub rather than remain and listen to a bunch of dull speeches.

Financial Fools Day, on the other hand, displayed creativity. There may have been no policy focus to the protest, but with such a disparate coalition of groups involved, there could never have been agreement on solutions to the financial crisis.

As an expression of dissatisfaction with the state and our supposedly "capitalist" economic system, G20 Meltdown and Climate Camp in the City were second to none. Like Comrade Bob I've become somewhat jaundiced with the advancing years, but I like to think that I can still sense when something positive is happening, and support it. For once I am not depressed.
09 April, 2009 00:43

nwo said…
Yes, this death was completely avoidable. The Leftwing protesters however love what I call the Palestinian Gambit. Instigate and esculate conflict and violence...then blame the authorities and enjoy the great PR (and anti PR). See, I told you they were fascists!
09 April, 2009 05:46

Waterloo Sunset said…
Taking antisocial crime seriously (which I agree absolutely we need to do) doesn't actually change the nature of the police. I think there's a very strong case to be made (and the IWCA in particular have done) that the police's general strategy towards antisocial crime in working class areas is one of containment as opposed to prevention. On top of that, in those areas, the police are often much quicker to 'deal with' those would would do something about that crime than those who commit it.
10 April, 2009 16:41

nwo said…
Well, its certainly true that British "gun laws" and "right to self defense," are an abomination.

I notice the bobbies have rearmed since guns were heavily restricted, and citizens robbed of competent tools and the right to use them for their own protection/defense.

mike cupcake said…
You simply must tell us more about the attempted levitation of Parliament.
18 April, 2009 05:09

Bob said…
Well, unfortunately, Parliament failed to levitate. I think it was organised by the Association of Autonomous Astronauts and the London Pychogeographical Association. It was part of the Anarchy in the UK festival in 1994, organised, I believe, by Ian Bone. Details:
http://www.spunk.org/texts/weird/sp001265.txt
http://www.spunk.org/texts/events/an_uk/sp000617.txt
20 April, 2009 09:45

Transpontine said…
'attempted levitation of Parliament' - no it definitely moved a few centimetres off the ground, or was I just feeling dizzy from dancing in a circle?
21 April, 2009 14:00

Waterloo Sunset said…
The guy next to me saw it levitate. He had been shovelling down microdots a couple of hours earlier. But only a churl could suggest the two events were linked.
23 April, 2009 17:34