The other day I was luxuriating in the sunshine in Peckham Park, and my heart was lifted further by the sight and sound of a host of little green parrots (or parakeets? Daniel would know). In the last few days, I've taken to running in Ladywell Fields, a public space which has been greatly improved over the last couple of years, and is now full of life. (Yep, any local readers, that's me: the sweaty, unfit, balding guy in the sneakers that look "retro" but actually have been mouldering in some cupboard since the distant time I last did any running.) Yes, it's that time of year again.

Here's TNC. Here's the rules:
List seven songs you are into right now. No matter what the genre, whether they have words, or even if they’re not any good, but they must be songs you’re really enjoying now, shaping your spring. Post these instructions in your blog along with your 7 songs. Then tag 7 other people to see what they’re listening to.

I tried not to put too much thought into it, but chose some of the things that have enhanced my Ladywell runs and my drives to and fro the park.

What's not to love?

Funky rocking Nigerian post-highlife from the 1970s. Supercool.
From Nigeria Disco Funk Special: The Sound Of The Underground Lagos Dancefloor 1974-79. Listen at Last.fm or at 8106.tv. 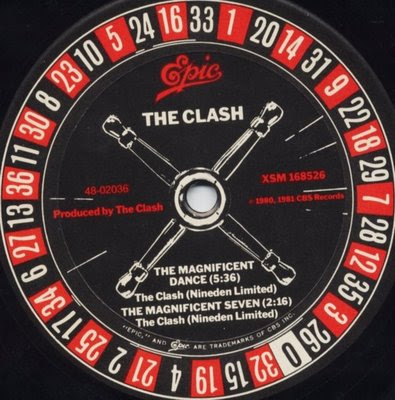 The Clash "The Magificent Seven"/"The Magnificent Dance"
"The Magnificent 7" was Mick Jones at the end of the 1970s discovering the joys of black New York, of hip hop, electro and pirate radio. "The Magnificent Dance" was the stretched out, even cooler version. Download [mp3] at CubikMusic. There fantastic covers out there by Kokolo and The Black Kids if you care to find them.


The Neptunes Remix of The Rolling Stones "Sympathy for the Devil"
My favourite Stones song, but lately I've been digging this remix. Go watch the YouTube at Martin's place. Here's The Neptunes homepage.

Rod Stewart "What Made Milwaukee Famous"
Rod Stewart is one my guilty pleasures (if not as guilty as fried chicken), and has been since I was a kid. For British readers, what made Milwaukee famous is beer. A great maudlin country got soul drinking song, by the great Glenn Sutton. Listen at last.fm.

By the way, last year I tagged Jams, Roland, Noga, Martin in the Margins, Darren (who I'm never tagging again!), Richard, and Incognito (the weak link, unless I missed it). Here's the musical journey we took.
Email Post
Labels: Bob's beats Memes

Anonymous said…
yeah, astrud gilberto. haven't thought about or listened to her work in so long. thanks for reminding me what an amazing "effortless" voice she has. don't know if you've ever heard her version of "agua de beber." here's the obligatory youtube clip

i might have to go dust off my old verve albums.

"Agua de beber" - actually more one of my favourite songs than "Brazilian Tapestry" is, just that I happened to be listening to that at a happy moment lately. "Agua de Beber" is one of the most beautiful songs.
25 April, 2009 21:30

bob said…
Shirley & Laverne did indeed work in a Milwaukee brewery. I should have said, btw, that that song is by the great Glenn Sutton and both Hank Thompson and Jerry Lee Lewis recorded better (if less soulful) versions than Rod, but I happened to be listening to Rod's version.

Daniel of "Daniels Counter" said…
Thanks for tagging! Sorry yes mighty busy with you know what but I stop working for that charity in mid June so perhaps that may mean more blogging time feel free to tell people about the stuff I posted on Audiofarm.org entitled "School for Peace"
02 June, 2009 15:49