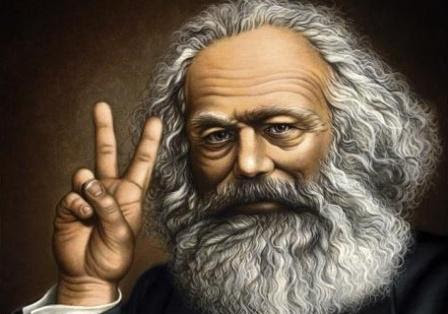 The recent welcome return to blogging of Judeosphere has meant a return of his occassional series, "Marxists versus Moonbats", In the series (1, 2 and 3), as he puts it, he records "the latest debate between the Moonbats (a.k.a. the nouveau Loony Left) and the Marxists (a.k.a. the Dinosaur Left)". I took the liberty of adding a contribution to the series while 'Sphere took time off. Any leftist not shamed by the antics of Yvonne Ridley and James Petras and their ilk is seriously deficient.

I have a somewhat different conception of Marxism than Judeosphere, however. For me, it is a central article of my faith (and I admit that there is a sense of religious faith about this) that Marx's ideas are an absolutely necessary element in understanding our world today, a world in which the relentless destructive creativity of capitalism is depleting the earth's resources at a breakneck pace, a world in which the vast majority of humans live unliveable lives, a world in which wars continue without end, a world shaped for the profits of the few and not the happiness of the many. Marx's analysis is, for me, confirmed and not refuted by the changes we have seen since his death, such as the entry of lands like China into the capitalist system and the immense misery resulting from that (without any accompanying development of the liberal freedoms capitalism's defenders claim is the system's inevitable accompaniment).

On the other hand, if Marxism is necessary, it is not sufficient. It is not sufficient, for example, for understanding and confronting the human capacity for cruelty exemplified by events like the Holocaust which have only an indirect relationship to capitalism. Marxism is not sufficient either, for example, for understanding the enormous qualititive difference between capitalist liberal democracies and their genuiune and worth fighting for freedoms, on the one hand, and equally capitalist but far more monstrous totalitarian states. Marxists who are not also defenders of freedom and democracy are not on my side.

With this in mind, I strrongly urge you to read Terry Glavin's post here, which approaches this issue from a number of angles. I also urge you to read, if you haven't already, Peter Ryley's pair of posts about the false analogies some folks draw between fascism and Stalinism and fascism and liberalism. And I strongly urge you to read the two fine talks on the history of antisemitism by two important left-wing members of my trade union, at least one of whom remains a Marxist: Robert Fine and Phillip Spencer. Finally, I urge you to read this interview with Moishe Postone, one of the most important Marxist theorists alive today, on Zionism, antisemitism and the left.

Not of quite the same calibre as those pieces of writing, this seems like a good place, too, to flag the issue I've been interested in recently and wrote a short post about at Contested Terrain: the failure of some sections of the Marxist left to understand the moral difference between fascism and ordinary capitalism, and where that failure leads. And I also recommend this, via CT, 'The Anti-Imperialism of Fools’: A Cautionary Story on the Revolutionary Socialist Vanguard of England’s Post-9/11 Anti-War Movement (pdf) by the AWL's Camila Bassi.

Related posts: Iran, drawing clear lines; Iran and the left, continued; Between Burke and Paine in the twenty-first century;  The left's old neighbourhood; The conservatism of the anti-war "radicals"; The trad left; A lexicon for our times.
Email Post
Labels: Bob's pick Marxish Reconfiguring the left

The best of Marx I would classify as such

i. Alienation
ii. What capitalism and industrialisation actually does to societies?
iii. What causes modern economic crisis?
iv. Addressing the relationship between economic, political and cultural power.

On the other hand, his theory of value, his use of a dialectical method, his primary focus on materialism as an historical engine, his causal anti-semitism and his lack of understanding with regards to capitalist decision making mark his limits.

A great thinker, one who saw further, but no prophet as much of the Marxist movements make out
16 February, 2010 12:00

Paul Sagar said…
"For me, it is a central article of my faith (and I admit that there is a sense of religious faith about this) that Marx's ideas are an absolutely necessary element in understanding our world today, a world in which the relentless destructive creativity of capitalism is depleting the earth's resources at a breakneck pace, a world in which the vast majority of humans live unliveable lives, a world in which wars continue without end, a world shaped for the profits of the few and not the happiness of the many."

Hate to crash the party, but that sounds more like a description of Malthus and Schumpeter than Marx...
17 February, 2010 10:37

bob said…
Thanks for coming to the party Paul, but does it? I am thinking of this sort of thing:
The bourgeoisie has through its exploitation of the world market given a cosmopolitan character to production and consumption in every country. To the great chagrin of Reactionists, it has drawn from under the feet of industry the national ground on which it stood. All old-established national industries...are daily being destroyed. They are dislodged by new industries, whose introduction becomes a life and death question for all civilised nations, by industries that no longer work up indigenous raw material, but raw material drawn from the remotest zones; industries whose products are consumed, not only at home, but in every quarter of the globe. In place of the old wants, satisfied by the production of the country, we find new wants, requiring for their satisfaction the products of distant lands and climes. In place of the old local and national seclusion and self-sufficiency, we have intercourse in every direction, universal inter-dependence of nations...

The bourgeoisie, by the rapid improvement of all instruments of production, by the immensely facilitated means of communication, draws all, even the most barbarian, nations into civilisation. The cheap prices of commodities are the heavy artillery with which it batters down all Chinese walls... It compels all nations, on pain of extinction, to adopt the bourgeois mode of production; it compels them to introduce what it calls civilisation into their midst, i.e. to become bourgeois themselves...

The bourgeoisie has subjected the country to the rule of the towns. It has created enormous cities, has greatly increased the urban population as compared with the rural, and has thus rescued a considerable part of the population from the idiocy of rural life. Just as it has made the country dependent on the towns, so it has made barbarian and semi-barbarian countries dependent on the civilised ones, nations of peasants on nations of bourgeois...

The bourgeoisie...has created more massive and more colossal productive forces than have all preceding generations together. Subjection of Nature’s forces to man, machinery, application of chemistry to industry and agriculture, steam-navigation, railways, electric telegraphs, clearing of whole continents for cultivation...whole populations conjured out of the ground — what earlier century had even a presentiment that such productive forces slumbered in the lap of social labour?...

Modern bourgeois society, with its relations of production, of exchange and of property, a society that has conjured up such gigantic means of production and of exchange, is like the sorcerer who is no longer able to control the powers of the nether world whom he has called up by his spells... It is enough to mention the commercial crises that by their periodical return put the existence of the entire bourgeois society on its trial, each time more threateningly. In these crises, a great part not only of the existing products, but also of the previously created productive forces, are periodically destroyed. In these crises, there breaks out an epidemic that, in all earlier epochs, would have seemed an absurdity — the epidemic of over-production. Society suddenly finds itself put back into a state of momentary barbarism; it appears as if a famine, a universal war of devastation, had cut off the supply of every means of subsistence; industry and commerce seem to be destroyed; and why? Because there is too much civilisation, too much means of subsistence, too much industry, too much commerce... And how does the bourgeoisie get over these crises? On the one hand by enforced destruction of a mass of productive forces; on the other, by the conquest of new markets, and by the more thorough exploitation of the old ones. That is to say, by paving the way for more extensive and more destructive crises, and by diminishing the means whereby crises are prevented.
17 February, 2010 11:05

bob said…
Or this kind of thing:

The discovery of gold and silver in America, the extirpation, enslavement and entombment in mines of the aboriginal population, the beginning of the conquest and looting of the East Indies, the turning of Africa into a warren for the commercial hunting of black-skins, signalised the rosy dawn of the era of capitalist production. These idyllic proceedings are the chief momenta of primitive accumulation. On their heels treads the commercial war of the European nations, with the globe for a theatre. It begins with the revolt of the Netherlands from Spain, assumes giant dimensions in England’s Anti-Jacobin War, and is still going on in the opium wars against China, &c.

The different momenta of primitive accumulation distribute themselves now, more or less in chronological order, particularly over Spain, Portugal, Holland, France, and England. In England at the end of the 17th century, they arrive at a systematical combination, embracing the colonies, the national debt, the modern mode of taxation, and the protectionist system. These methods depend in part on brute force, e.g., the colonial system. But, they all employ the power of the State, the concentrated and organised force of society, to hasten, hot-house fashion, the process of transformation of the feudal mode of production into the capitalist mode, and to shorten the transition. Force is the midwife of every old society pregnant with a new one. It is itself an economic power.