Stooges of the Iranian dictarship, continued 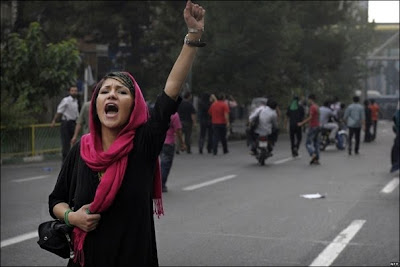 Mina Khanlarzadeh at Louis Proyect on Flynt Leverett and Hillary Mann Leverett in Iran, the Leveretts being the ex-CIA operatives now darlings of some sections of the left for their misinformed commentary on how nice our enemy Iran actually is. Extract:


They didn’t see any of the imprisoned students, obviously because they are held in the prisons. They didn’t see any of the escapee students, obviously because they are hiding out of view. They didn’t see thousands of imprisoned people, obviously because they are in jail. They didn’t get to see the journalists, human rights and women’s rights activists because they are either forced into exile, held in the prisons or fleeing from one town to another to avoid arrest. Did they talk to Sohrab Erabi’s mother? Did they talk to any members of the Mourning Mothers? Did they talk to Zhila Baniyaghoub, a women’s rights activist and journalist, who was imprisoned after the election? How about Jila’s husband Bahman Ahadi Amoee, an economic journalist, imprisoned from June 2009? Did they ask Jila what she thinks of the political situation of the country that has kept her beloved one in jail from June 2009 despite his health condition? Did they talk to one of the students in this video who were beaten up and arrested three nights after the 2009 June election in a dormitory of Tehran University? Did they see any of the workers who have been unpaid for a considerable number of months? Did they see the family of the imprisoned Mansoor Osanloo, the one who only wanted an independent union for him and his fellow workmates with wages about the poverty level (his income was less than a third the poverty level)? How about Farzad Kamangar the teacher who is imprisoned for his union activism?

(See also Hamid Dabashi on the same topic, linked from that post.)

And, via the same source, Shokoufeh Sakhi at ZSpace on Iran and cultural imperialism. Extract:


There was a time, some thirty-odd years ago, that, whenever my friends/co-activists/comrades and I heard anything about show trials in the Soviet Union under Stalin, or executions, labour camps, displacements, etc. we simply dismissed it out of hand as bourgeois, imperialist propaganda. The Iranian left, even those who considered the USSR state capitalist and dubbed it ‘social-imperialist’, still could not believe such atrocities against humanity occurred in such a 'pro-working class' state. Enforcing substantial justice and equality just could not go hand in hand with oppression and the reign of fear and darkness. Like many today, our logic was decisively based on observation of who was benefiting from this undermining of socialism in general and the USSR in particular: American led western imperialism.[...]

Viewing the Iranian Islamic regime as a populist state, a state that supports or works for its working class or under-class, while it murders, assassinates, executes, tortures, kidnaps and imprisons whoever shows a sign of opposition, is not naïveté, but cultural imperialism. I would really like to hear how some western 'anti-imperialist' intellectual of whatever stamp would react to mass trials, confessions and so on in her or his country – or in one of the fellow civilized countries. I doubt that such a 'radical' would watch, silently writing it off as a natural phenomenon for such a place. The story is evidently quite different if the atrocity takes place in a third world country like Iran. Even after two people are put through a farcical pretense of a trial and hanged for participating in a demonstration, the self-congratulatory Monthly Review remains silent.


Iran: The Islamic Revolution Defeats Western Hopes for Regime Change”, posting four clips from the Iranian state media's pro-state productions, three on the so-called victorious day for the Islamic state under the rule of Khamenei and Ahmadinejad, and one clip under the subheading “Green Wave Ebbs” reporting on the meek presence of the opposition - hence their ‘defeat’. This 'ebbing' and 'defeat' is also propped up by adding two short clips showing a sparse crowd of opposition protesters. For more, the editor recommends that we "consult Iran's Last [!] Marxist Nasser Zarafshan: Setareh Derakhshesh, "Interview with Dr. Nasser Zarafshan and Farrokh Negahdar"” conducted by Voice of America on January 6, 2010. That the interview is in Farsi means that the current non-Iranian “generation of activists” are limited to an “education as subscribers to” MRZine from the Iranian state presentation of its own victory (no doubt one could get a similar grasp of the righteous Chinese, North Korean, Egyptian or Saudi Arabian representation of their people’s interests from their state newscasts, but these other representatives of the people don't shout “death to U.S.A.” so they are of no interest to MRZine). Beyond this posting's title, the rest of the text tells us of "Hashemi’s hopes for a palace coup," and gives us the following trail-off: "Iran Celebrates the 31st Anniversary of the Islamic Revolution”.

As I already noted, the Yoshie post, which Sakhi deconstructs for us here, was disgracefully published at Lenin's Tomb. As I noted then, Richard Seymour and the SWP have much more sensible views on the Iranian uprising. Why on earth to they continue to give airspace to these pro-fascist views?

Those of strong stomach can look at the videos of real police brutality under Galloway's former paymaster, Saddam Hussein, and his current paymasters in Iran.


And what, finally, is Galloway's employer Press TV reporting?

schalomlibertad said…
check out this great presentation by Danny Postel on the Iranian revolution and the anti-imperialist left apologists.
10 March, 2010 14:13

Anonymous said…
There is something incoherent about this post. It makes an amalgam between Znet and MRZine when they have totally opposite positions on Iran.
10 March, 2010 15:25

bob said…
Louis, re-reading I guess you are right and that wasn't my intention.

I use the term "ZLeft" to refer to the new New Left around outlets like ZNet and Common Dreams and MRZine that that dress themselves up in radical libertarian imagery while supporting any old anti-American dictatorship. ZMag itself has had remarkably little coverage of Iran's uprising, and a lot more on America bullying Iran over the nuclear issue, which I think speaks volumes. (As I understand it, ZSpace is simply a blogging space for people in the broadly Zish camp, which is pretty heterogeneous, so Shokoufeh Sakhi's views are not exactly ZNet's views.)

Similarly, CounterPunch runs Yoshie-ish things, as does Lenin's Tomb, which publishs Seymour's own quite decent analysis as well as Yoshie's nonsense.

It is also worth re-stating that MRZine is not the same as MR itself, contra what Shokoufeh Sakhi says. MR ought to be ashamed of MRZine on this.

I also think I will change the title of this post. I don't mean "Iran's stooges", because that implies Iran itself is bad, when I mean its mis-rulers. "Ahmadinejad's stooges", a formula I've used before, would also be not quite right, as Ahmadinejad necessarily the real power in Iran. I'll think of something.

ModernityBlog said…
Seems all good to me, Bob, excessive pedantry, which is often a byproduct of years in small lefty groups isn't too helpful here, don't worry. Your regular readers will enjoy it.

PS: I am trying to explain the problem with the StWC over at Dave Olser's, it is damn hard work.

Judeosphere said…
Check out this ultra-goofy defense of Ahmadinejad's recent statements over at "Palestine Think Tank":