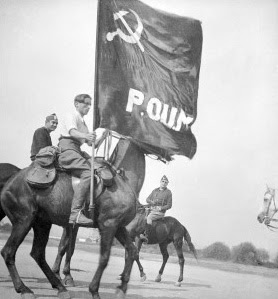 This post is to link again to Roland's post about the report on Indymedia of anarchist defacement of an Abraham Lincoln Brigade memorial in San Fran.

There is a fascinating conversation in the comments thread, which I have contributed to. In particular, read TNC's extemely knowledgeable contributions. If you want to follow this up, TNC also made very good contributions to a comment thread on the Abe Lincolns here a while back. TNC makes the point that the Veterans of the Abraham Lincoln Brigade (VALB) were peddlars of whatever the Stalinist line was at the time: from 1939 to 1941, while the Ribbentrop-Molotov Pact held, they opposed the anti-Nazi cause as an imperialist one. This point is also made (in an article flawed by a a couple of inaccuracies, and which claims Franco as a not so bad chap) by Macolm Kline:

It seems that the VALB’s claim to be the first responders to the Nazi menace is a bit shaky in other ways too. For one thing, they pathetically fell in line when Hitler signed a non-aggression pact with Stalin.

“The American people look upon the veterans as the foremost champions of democracy and anti-fascism,” VALB “Major” Milton Wolff stated in May of 1941. “We must utilize this prestige in the boldest fashion to explain the fundamental difference between their imperialist war—which we vigorously oppose—and the Spanish people’s defense of democracy which we just as vigorously supported.”

Wolff did not have to offer such explanations much longer. Later that year when Hitler attacked the Soviet Union and broke the pact, the Soviet fronts did another about face.

Wolff himself affixed his name to a May 1941 VALB pamphlet entitled Western Front Now! “Let us show the British and the Soviet people that we are with them all the way,” he declared.

He accomplished half of those goals. Comrade Alastair dissapproves of the desecration; I agree with most of what he writes, although I don't think I agree with a lot of his politics! He points out that the ALB

was largely organised by the American Communist Party, but that was by no means the only radical organisation with members present in the Brigade’s ranks - there were also members from many other socialist and anarchist groups, including the anarchist-dominated IWW. This makes the anarchist vandals actions espescially ironic, and espescially disgusting. A further point of irony is that one notable member, George Sossenko, also fought in the Durruti Column, led by Durruti himself! I’m unsure whether Durruti would approve of desecrating a monument to one of his soldiers.

Sossenko pops up in this fasciating article by Dan Kaufman at the NY Observer, on the fact that both Barack Obama and John McCain have professed to be inspired by Hemingway's For Whom the Bell Tolls. Jefferson Flanders takes up the story:

the hard Left in the United States, including some of the American Communists who served in the Abraham Lincoln Battalion (part of the International Brigades), ferociously attacked the book (and its author) after its publication in 1940. These critics, among them former Lincoln commander Milton Wolff, objected to Hemingway’s negative portrayal of Soviet motives and tactics in Spain and to his unsparing and harsh portraits of political commissar André Marty (known as the “Butcher of Albacete” for his purge of non-Communists in the International Brigades) and the Communist leader Dolores Ibárruri, the Leftist icon also known as La Passionara. (Hemingway, never one to duck a fight, responded directly and profanely to those he called the “ideology boys.”)

Hemingway made a distinction between supporting the Loyalist cause, as did his fictional character Robert Jordan, and endorsing the Soviet strategy of deception and manipulation in dealing with the Republican government. Such an approach was anathema to the hardliners. There’s an amusing anecdote (recounted in Peter Carroll’s The Odyssey of the Abraham Lincoln Brigade: Americans in the Spanish Civil War) involving the actor Gary Cooper, Hemingway’s choice to play Robert Jordan in the film of For Whom the Bell Tolls, and Alvah Bessie, a Lincoln veteran and screenwriter. During the filming, Bessie lectured Cooper about how the Spanish conflict hadn’t been a civil war, as Cooper believed, but instead was a German and Italian invasion designed to overthrow the legal government of Spain. Cooper’s laconic, and classic, response: “That so? That’s what so great about this country…a guy like you can fight in a war that’s none of his business.”[Read the rest.]

And here is a more positive appraisal of the ALB, used to make a good point.


See photographs of the monument and its desecration here (apparently after attempts at a clean-up).

Orwell… had the intestinal fortitude to tell the truth about Stalinist mendacity, brutality, and counter-revolutionary policy and behavior in and elsewhere at the real risk to his own skin. Let's not forget that he fled only a few days before his would-be assassins discovered his whereabouts. To claim that any criticism or struggle against Stalinism, the most hideous perversion of working class idealism, is the same as working for the CIA or the British Empire is a bald-faced lie (typical of Leninists, who cannot imagine that anyone could possibly attack them from the left). The CIA and other ruling class scumbags would never be in favor of the sorts of self-organized experiments in working class autonomy and power (you know, that whole Revolution thing) that occurred in before and during the Civil War, and in other places since. So fuck you and your Stalinist apologetics. Humanity will never be free until the last capitalist is strung up with the guts of the last Stalinist.

Regardless of subjective intentions, and many of them were hard-core Stalinist stooges, the members of the Abraham Lincoln Brigade were utterly exploited by their Stalinist commisars. They sustained a high casualty rate because their commaders were incompetent -- and let's not forget that some number of them were murdered by their commanders as well, in many cases for political [deviation from the] counter-revolutonary Stalinist line. Any non-Stalinist study of the Spanish Civil war shows that the Lincolns were organized and run by the Moscow franchise CPUSA, as were the other national sections of the misnamed Inrenational "Brigades;" most of the national sections were more like battalion strength.

jams o donnell said…
Excellent stuff Bob. I've been looking at the Irish contribution to teh Spanish Civil War - particularly interesting as substantial numbers fought on both sides (about 700 in the francoist Bandera XV and over 200 in the IB) I must get back to doing historical posts again. Frank Ryan is one person I will be posting on in the not too distant future
01 August, 2008 12:48

bob said…
Yeah Jams, what's with all these furry animals? :)

I have to say I knew nothing, until your comment at Roland's place, about the Irish involvement in the Francoist side, which you say was non-fascist. I am very keen to hear more!
01 August, 2008 13:06

Roland Dodds said…
If anything, this discussion has reinvigorated my own interest in the Spanish Civil War, as well as the contribution to the cause from Irish volunteers as Jams has brought up. It is surely a complicated issue, especially for those of us on the left who continue to argue that the war against totalitarianism in Spain was an important event within the 1900s, but also recognize how Stalinists and other totalitarians on the left worked against the revolution.
01 August, 2008 13:39

jams o donnell said…
I wouldn't say it was non fascist - a large proportion of Bandera XV were Blueshirts - but not all of them by any means and some where IRA members. As a fighting force they were slightly less useful than a chocolate teapot.
01 August, 2008 17:26

Transpontine said…
The Irish dimension is interesting, not only were there Irish volunteers on both sides but apparently IRA members too. Look forward to reading more about Frank Ryan JAMS - don't forget the Pogues reference to him! A hero of the Republican left who fought Franco and then ended up doing deals with the German Nazis on the basis of them being England's enemy.
05 August, 2008 08:11