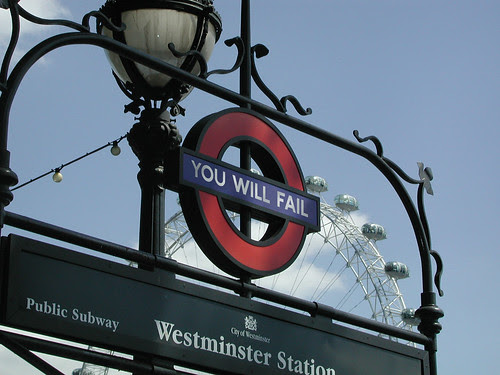 Today is five years after the 7/7 bomb attack on London. The fear of that day returned to me a couple of weeks ago when I was at London Bridge station and an Inspector Sands call came out over the tannoy, followed by an order to evacuate the station. I tried to remain calm, but I could feel the panic starting to flood through me. Other passengers, however, seemed completely calm - most had probably not noticed the Inspector Sands call and it took a while for the implication of the evacuation to sink in. I took out my phone and got my wife's number up, my finger ready to call with a final goodbye. And then I was out on the street, away from the station, and in Borough Market surrounded by tourists, and the moment had passed. I was back in normality.
I had a meeting at a large office building nearby, and the entrance way had the official threat level. It was "severe", but I checked later and severe, nowadays, is normal. It means "that a terrorist attack is highly likely." This is how we live in London today; we just carry on. Just like we did in the 1970s, 1980s and 1990s, when IRA bombings were going off regularly (I particularly remember the April 1993 bomb in the City, and feeling the ground shake even though I was way across town.)


“Even after your cowardly attack, you will see that people from the rest of Britain, people from around the world will arrive in London to become Londoners and to fulfil their dreams and achieve their potential.
“They choose to come to London, as so many have come before because they come to be free, they come to live the life they choose, they come to be able to be themselves.
“Whatever you do, however many you kill, you will fail.”


Below the fold, my 7/7 posts.
London Under Attack, Freedom and democracy under attack
The Day After
Leadership Under Attack
My London
Islamism: A Doctrine of Revenge
Chickens coming home to roost
More chickens coming home to roost
London: In defence of the multicultural
Not Afraid?
London versus the terrorists
Community of Believers
Terrorists and 'Terrorists'
Scary
Another Day After
Blair's fault?
East London and Stockwell
Fascists? Shrill tone
Useful Idiots
Les Back:  London and the war on terror
Surviving more bombs
One year on


See also: The lessons of the Lucozade plot; Terror and British Islam 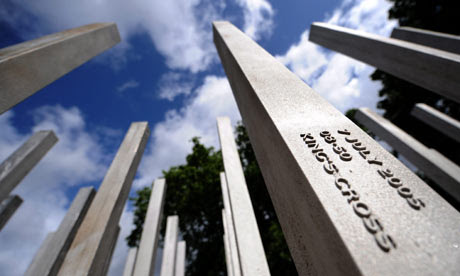 Flesh said…
Yeah, I was trapped on the East London line under the thames for 30 minutes the other day thinking of 7/7. The driver and her cab companion were acting weird, charging up and down the train with grim faces saying they needed to turn the tunnel lights on to see if the way was clear. After 20 minutes I became fairly sure there was something bad on the line. A friend works in counter-terrorism engineering and he once told me that if there's an explosion under the Thames they'll seal the tunnel to prevent flooding, so if you don't burn or bleed to death, you'll drown.

Anyway, of course it was just the usual London Transport fuck up, but by the time we got moving I'd gone a fair way to composing myself for death. And personally if fear came to stop me travelling through London on public transport, I couldn't live with myself anyway.
08 July, 2010 23:42